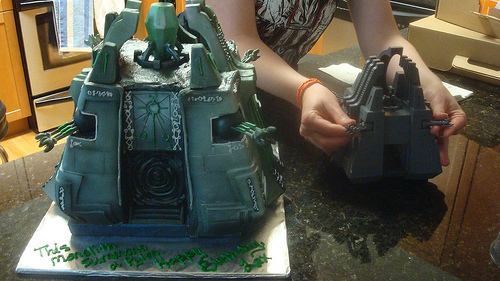 Topless Robot is hardly the 24-hour nerd cake newscenter that Great White Snark is, but when someone sends me a cake, I don’t ignore it. Especially when the cake is based on a rather large miniature from Warhammer 40,000. Skinnytie made this amazing Necron Monolith cake for his gal pal StillwaterBalm’s birthday. The miracle, of course, is not his incredible baking/icing skills, but that he knows a girl who actively wanted a Warhammer 40,000 cake at all — it’s kind of like finding out unicorns exist. See more pics of the cake in all his evil Necron glory here.