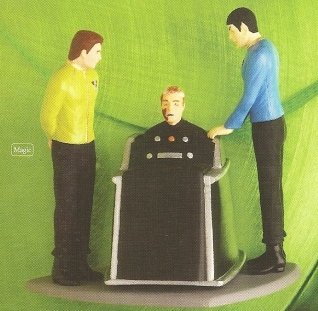 …which is for grown men to stare at an utterly paralyzed man trapped in a mobile box who can only speak with beeps. Yes, you too can decorate your Christmas tree with this fine Hallmark ornament of Captain Pike from the Star Trek episode “The Menagerie,” in his ridiculous futuristic wheelchair-contraption; the ornament actually makes two types of beeps (“yes” and “no”), so he can answer your questions — Am I really getting that bike for Christmas? Will daddy put too much bourbon in his eggnog again? Is this most ridiculous ornament of all time? Beep! (Via TrekMovie)