She’s been around for a half a century, she still looks great and just about every woman knows her name — indeed, Barbie is one of the biggest icons in pop culture. But it’s only been a short time that Barbie started hitting the guy’s radar, mainly through a plethora of nerd-friendly Barbie sets that forced them to wander down the pink aisles in Toys R Us. These set also proved a godsend for nerdy girls who were forced by gender-stereotype-loving parents to get Barbies instead of the generally cooler boys’ toys. Topless Robot quietly breaks into Barbie’s Dream House to peep unnoticed and inappropriately at the 12 examples of Barbie nerdery at its finest. 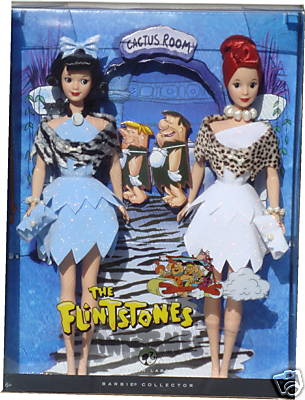 Much like their cartoon counterparts, the Wilma and Betty Barbies are disturbingly attractive. Take consolation in the fact that this two-pack was released last year, and had nothing to do with the live-action Flintstones movie where Rosie O’Donnell played Betty.

Maybe King Kong isn’t the nerdiest
movie ever, but the fact remains that this set includes Barbie in Fay
Wray distress mode while in Kong’s hand. Yes, this is the only Barbie
which comes with a giant monkey hand. Even a little piece of a giant
monkey gives this enough of a cool factor to make the list.

10) Batman and Catwoman Tommy and Kelly 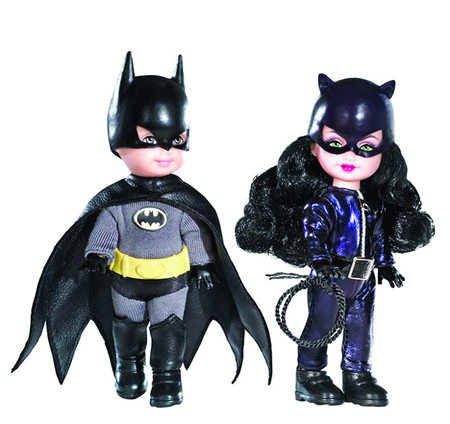 We have no goddamn clue who Tommy and Kelly are, but they look adorably horrifying as the Dark Knight and Catwoman; Kelly is especially disturbing as a toddler wearing a leather catsuit and brandishing a whip. Still, Tommy would make for one hell of a 12-inch-scale Bat-mite figure, if you wanted one. For some reason. 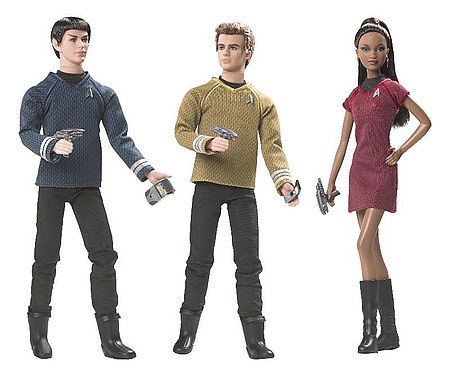 These figures should be on shelves now, commemorating the new Star Trek movie with Ken pulling double-duty as both Kirk and Spock, and Barbie donning blackface to be Uhura (well, not really, but Barbie has several black friends who could have been Uhura, and yet Barbie hogged the spotlight. As usual. Bitch). Not only are these new toys the only place to get a 12-inch Uhura, since Playmates decided not to make one, but both Kens looks better than their Playmates’ counterparts in that they look marginally like human beings. 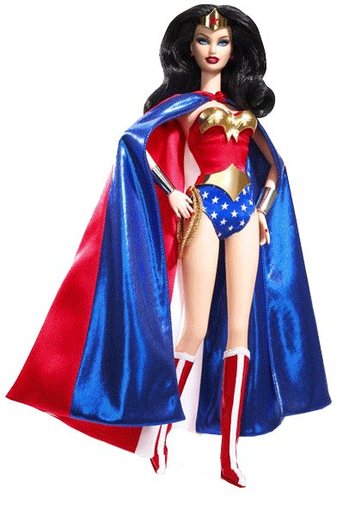 Thanks to Mattel’s deal with DC, Barbie has dressed up as many of DC’s superheroines over the past few years. However, it’s hard to get more iconic than Wonder Woman, and when you combine that with the icon that is Barbie, well… that’s a hell of a a lot of girl power, and one hell of a doll. Plus, Wonder Barbie comes with a lasso and a better cape than Supergirl’s, so there.

7) Barbie in The Birds 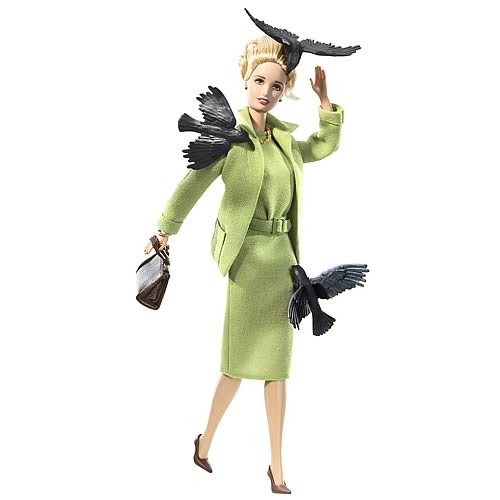 This homage to the classic
Hitchcock thriller has Barbie in the classic Tippi Hendren role as a
woman about to get her fill of feathers, beaks and bird poop. This may
be the first time that Mattel has released a Barbie in danger before.
One wonders if anyone at Mattel suggested another Hitchcock classic
with a Barbie in the shower while a knife-wielding Ken waits beyond the curtain in
drag. I would imagine he’d pretty much be cleaning out his desk if he did. 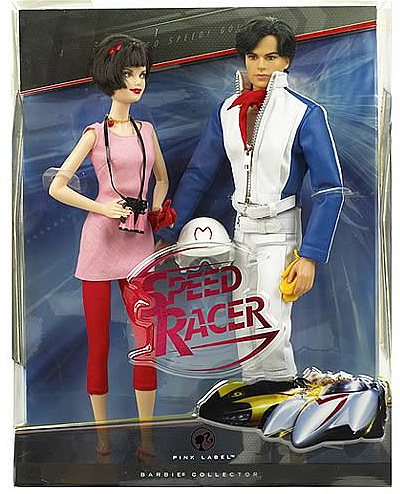 Much like the movie, Mattel released this two pack of Ken as Speed and Barbie as Trixie and no one cared. If only they had made a Kelly as Spridle and a Chim-Chim that they could lock in the trunk of Barbie’s corvette… 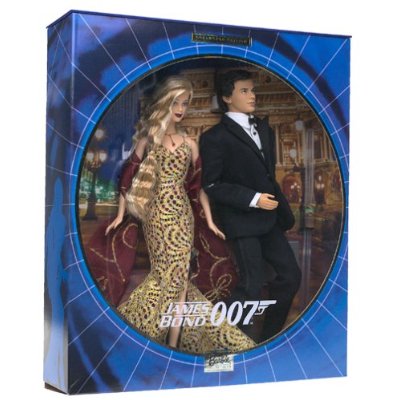 In the Bond-iverse, the femme fatale is as
central to the story as the villain, and with her preposterously sexy proportions, Barbie would fit right into Bond’s world of intrigue… as long as she had some innuendo-laced last name. Plus, Ken as James Bond isn’t that big a
stretch, thanks to the pleasantly bland bell curve that is Roger Moore. 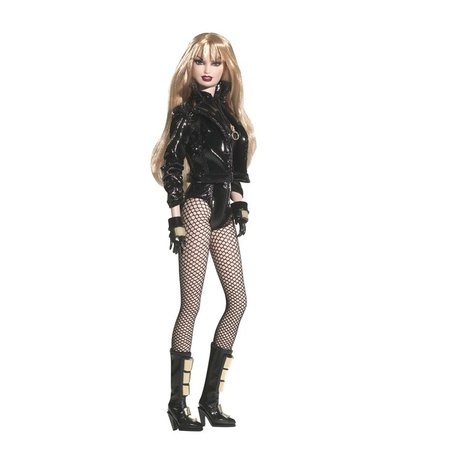 The Green Arrow’s partner in crimefighting (and in the boudoir) isn’t exactly a household name, making this Barbie the most obscure of the DC heroines she’s been dolled up as. But the doll’s real draw is that Black Canary is the first figure to feature Barbie wearing black fishnet stockings. Certain retailers objected to the figure’s sexy outfit, although this is pretty much the same costume Canary has been wearing in the comics for close to 40 years. Progress! 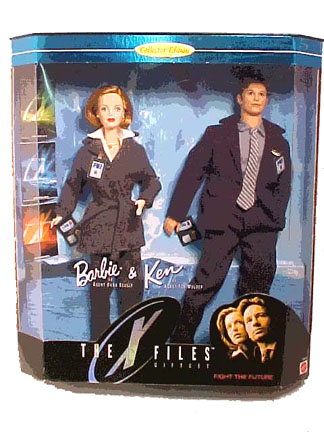 When you look at the dismal box office performance of last years X-Files movie, it’s hard to remember how big a deal that show was in its prime. It was so big that Barbie and Ken paid homage as Mulder and Scully in 1998; not bad for a scrappy little Fox show which explained nothing ever! Besides, the world still needs more Gillian Anderson merchandise. 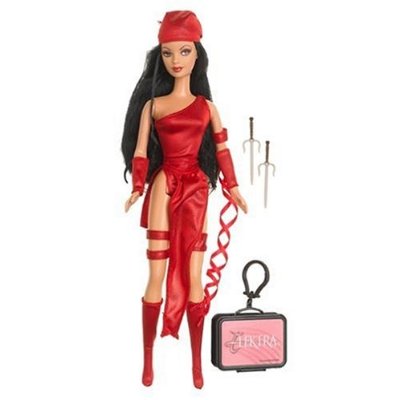 Just before acquiring the DC superhero license and thus being legally required to spit in disgust everytime they hear the word “marvel,” Mattel got the rights to make a single Marvel character Barbie in 2005. Only one pop culture
event was stupendous enough to make this now-impossibility possible —
the Elektra movie starring Jennifer Garner. Somehow, despite the odds, this Barbie kept her comic outfit and came with sais, and thus was several jillion times more awesome than the movie. 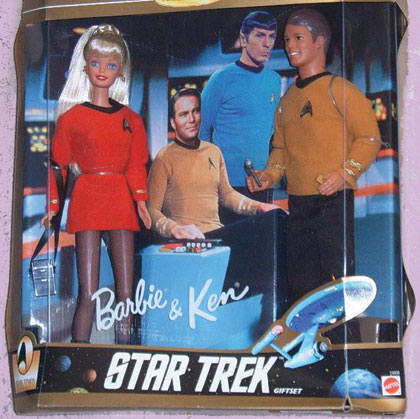 This is the one that truly started it all. released in 1996, this classic Star Trek box set included Ken playing officer and Barbie rocking the 23rd-century mini-skirt was the first of Mattel’s pop culture Barbie dolls and sets. Given the insane smiles on both their faces, it’s very clear that Ken takes his role as the lusty Captain Kirk and Barbie as the nearby hot girl very seriously, and that someone’s going to make an entry on the Captain’s log very shortly.