Since what we think of as “geeks” first appeared in the late twentieth century, there have been geek arguments. Where sports fans have been getting in drunken bar fights over their favorite teams forever, it’s only recently that geeks created the Internet equivalent of a bar fight–the flame war.

Of course, one can assume with a fair degree of confidence that almost all geeks would immediately retreat from an actual physical confrontation, but the anonymous freedom of the Internet coupled with the ability to respond almost instantly on message boards has allowed geeks to argue viciously about things that most self-respecting people have never even thought of, much less deemed worthy of discussion.

Horror geeks hashed this one out for years: which supernatural slasher would win in a fight? Jason was slow, stupid and awkward, but more or less impossible to kill, and had the distinct benefit of existing in the real world. Freddy was smart and fast, but could only attack you in your dreams. Incredibly, this argument actually got answered in 2003’s Freddy vs. Jason. Naturally, the fight more or less came out to a draw, and viewers found themselves in the odd situation of seeing Jason as a kind of hero–or at least anti-hero–in opposition to the utterly evil Freddy. 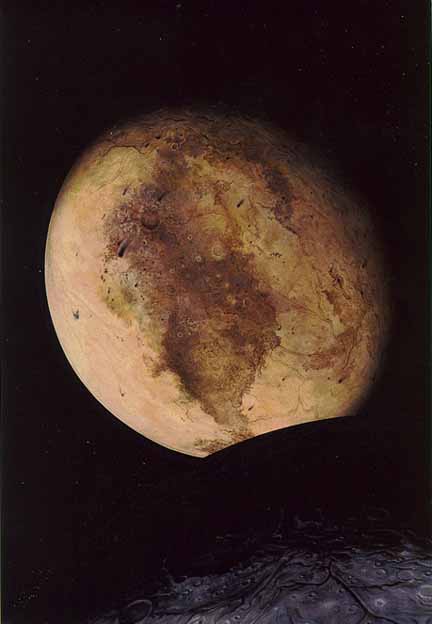 This is one of the rare nerd arguments that has actually played out in the public sphere and been cared about by the non-geek community. In August 2006, the International Astronomical Union reclassified Pluto as a “dwarf planet.” This caused quite a stir, and Pluto turned out to have a surprising amount of support for a barren chunk of rock billions of miles away. Part of the controversy may have been because Pluto was the only planet discovered by an American; but more likely it was because several generations had grown up with the nine planets and the idea of demoting one of them seemed like blasphemy (not to mention how much it would cost the public school system in new posters). While Pluto remains a dwarf planet, the debate regarding its status goes on.

8) The Juggernaut vs. the Blob 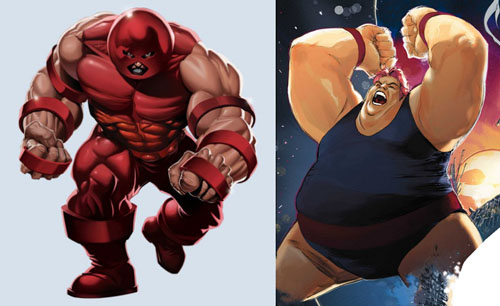 This one’s simple. The Juggernaut is an unstoppable force. The Blob is an immovable object. What happens when they clash? The universe as we know it should implode, right? Well, that’s one of many theories. Fan explanations have gone into everything from working it out with actual physics to claiming the Gem of Cyttorak would give Juggernaut a supernatural edge. In the comics, the Blob has actually been moved by the Juggernaut, Hulk, and even Strong Guy(!), so clearly the Blob’s whole “immovable object” claim is an exaggeration at best. Still, Juggernaut vs. Blob remains the geek equivalent of the Omnipotence Paradox. 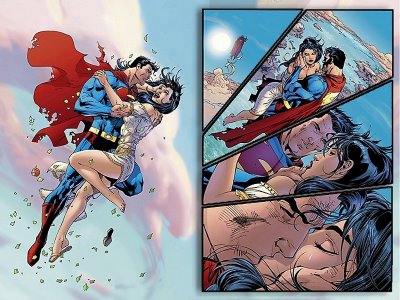 Considering Superman’s immense powers and his ongoing flirtation with Lois Lane, it was inevitable people would begin to wonder: what would happen if Superman had sex with Lois? Generations of fans have enjoyed speculating obsessively upon the minute details of how Kryptonian/human sex might work–or not work. Science fiction author Larry Niven wrote a famous article called “Man of Steel, Women of Kleenex” to examine the issue. The question even popped up in the comics as an Elseworlds story, although in this case it was giving birth to their super-strong child that killed Lois, not the sex itself. The danger of lethal ejaculation was used as a joke a deleted scene in the movie Hancock.

There have been almost a dozen actors to play the Doctor on Britain’s long, long-running Doctor Who television show, but for a long time the unquestioned favorite was Tom Baker, who played the Fourth Doctor. Baker’s unique performance lasted seven years, meaning an entire generation of Doctor Who fans grew up with the same Doctor. With his mess of curly hair, distinctive long scarf and fondness for jelly babies, Tom Baker became the iconic image of the Doctor for many–just saying the name Doctor Who brought his character to mind. Much like Sean Connery and the James Bond films, every time a new actor takes over the Doctor role, they’re inevitably compared to the Fourth Doctor.

The only Doctors to ever challenge Baker’s supremacy have been the Seventh Doctor (Sylvester McCoy) and the current Tenth Doctor (David Tennant). While the Seventh Doctor once beat Baker in a fan poll shortly after his tenure ended and the Tenth won recently, it remains to be seen whether any Doctor can match the enduring popularity of Baker’s run. 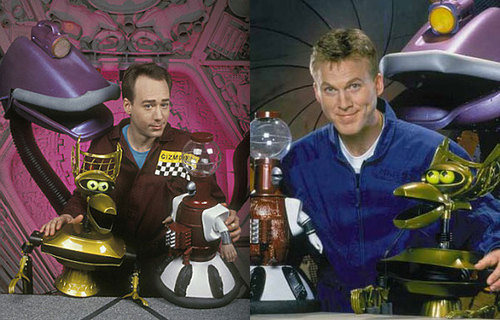 Who was the better Mystery Science Theater 3000 host? This was one of the first great flame wars, as nerds who were fans of MST3K also tended to be among the early Internet bulletin boards users, and when Mike replaced Joel on October 30, 1993, a generation of geeks were traumatized, while another generation met their new idol. Whether you prefer Joel or Mike seems to depend almost exclusively on which one was the host when you started watching the show. The two hosts had very different styles. Joel was goofy and good-natured; his riffing was heavy on references and funny voices. Mike was more sarcastic, and  would often eviscerate the films by pointing out their technical flaws and bad acting. It was a definite difference in tone, and most fans prefer one or the other.

4) Do Balrogs have wings?

If you were a Lord of the Rings fan in the late 1990s and early part of this decade, you’re familiar with this argument. It began raging across Tolkien bulletin boards around 1997 and continues to this day. In its prime, the argument caused some of the longest and most vicious flame wars known to man. And as the link above shows, nerds to this day are still obsessed by the question of Balrog winged-ness.

The problem centers around the description of the Balrog in The Fellowship of the Ring, the first book of Lord of the Rings. Initially, Tolkien describes the Balrog as being casting a dark shadow that “reached out like two vast wings” (emphasis mine). A few paragraphs later, Tolkien states that “its wings were spread from wall to wall.” According to the No-Wingers, th
is is simply a continuation of the metaphor of the Balrog’s shadow, while Yes-Wingers interpret “its wings” to refer to the Balrog’s flesh-and-blood wings blocking the passage. Over the years various artists and filmmakers have depicted the Balrog according to their own interpretation, although the Yes-Wing theory predominates. Some try to find a middle ground by suggesting the Balrog is shrouded in a kind of living supernatural darkness that spreads out from its back like wings.

The Balrog Wings argument is perhaps the archetypal geek flame war. The topic is both fannish and incredibly pedantic, of no interest whatsoever to the outside world, and yet for whatever reason, geeks argue about it like twelfth century Catholic monks debating some obscure passage of the Bible. 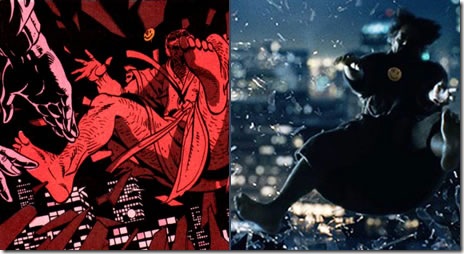 While this particular argument isn’t unique to geeks, it’s certainly a source of endless flame wars. One good example is The Lord of the Rings — ask almost any fan of the franchise and he or she will almost certainly have a firm opinion of the superiority of one or the other. Fans of the book tend to focus on what the movies leave out, and the things they change; fans of the movies roll their eyes at the endless pages of Elves singing goofy songs or descriptions of landscapes and prefer the film’s tight plotting and action..

Other good examples include the Harry Potter movies; movies based on Roald Dahl books such as The Witches, Matilda and Charlie and the Chocolate Factory; any movie based on a Michael Crichton novel; The Hitchhiker’s Guide to the Galaxy; and most recently, Watchmen and Twilight (what? Teenaged girls can be geeks too).

Much as the political stew of young America eventually boiled down to Democrats and Republicans, so did the world of comic books become dominated by two powerhouses: DC Comics, home of Superman, Batman, Wonder Woman and the Flash, and Marvel Comics, home of Spider-Man, the Incredible Hulk and the X-Men.

While the development of the two companies have certainly influenced one another over the years, there are certain traits that remain unique to each. DC is the home of the “capes,” the older superheroes who were created back when the outfit of a circus strongman didn’t look silly to the average person. Marvel is a child of the Silver Age, when heroes began to have actual lives. To this day, DC comics tend to have an epic, often cosmic scope, examining the very nature of what a superhero is and what he or she means to the universe. Marvel comics are often more grounded in realism and examines social and political issues. DC comics take place in fictional cities such as Metropolis and Gotham, while Marvel comics center around New York.

While DC doesn’t have the market share of Marvel these days and it certainly doesn’t have the breadth and depth of popular characters, it does have two characters — Superman and  Batman — who are more recognizable to anyone on Earth than any Marvel character (Spider-man is close, but not quite there yet).

Almost from the first blast from a Star Destroyer, fans of Star Wars and Star Trek have been at each others’ throats. Ironically, Star Trek fans were once reviled by fans of “real” science fiction in the early 1960s. They enjoyed a brief period of hipness in the early 1970s before being kicked to the curb by the Star Wars juggernaut. The reason Star Trek and Star Wars fans are often at odds is because their worlds are so different. While both feature plenty of adventure, Star Trek emphasizes exploration and examines social and political themes, while Star Wars is an epic featuring classical hero and myth archetypes.

In terms of cultural acceptance, Star Wars fans have long enjoyed the upper hand. Star Trek fans are often stereotyped as incredibly nerdy, basement-dwelling losers, while it was usually cool to like Star Wars. Geeks with broad popularity, like Kevin Smith, also helped raise the profile of Star Wars fans. This has changed somewhat with the Star Wars prequels — a memorable sketch on Late Night with Conan O’Brien featured Triumph the Insult Comic Dog humiliating a group of fans waiting to see Attack of the Clones.

Star Trek fans, for the most part, have responded in, well, nerdy fashion. The best example is an essay by science fiction author David Brin in which he characterizes Star Wars as an elitist, anti-democratic universe where Force-users lord over everyone else, while Star Trek offers a more populist view where the leaders may be the best and brightest, but still human. However, the really vicious debates are about the important things, such as whether the Enterprise or a Star Destroyer would win in a fight.