In 1983, an ebony goliath with a penchant for unique haircuts and a compulsion to own and wear all gold chains ever made stole the world’s heart. Mr. T was a larger-than-life personality that taught a generation the meaning of “jibber jabber,” and his impact on pop cultrue was so powerful that  (the predictable) dumpsters of Mr. T-branded merchandise came pouring into the ’80s and even a bit into the ’90s. While Mr. T made it known that he didn’t have time for fools, he seemed to have even less for “approval meetings” or “quality control,” because a great many of these products were horrible, or made no sense whatsoever, or both. Here are the most foolish pieces Mr. T merchandising, and man, are they worth pitying — both those who made them and those who unfortunately received them.

Car air fresheners generally use the images of things we imagine would smell nice, like a cherry or a pine tree or the Tazmanian Devil. Large, sweaty men are generally not assumed to smell nice which is why there’s never been a “large, sweaty men” potpourri scent. Also, considering Mr. T’s fan base is comprised almost entirely of 11-year-olds, how many of them really have car odor problems that need addressing?

Neckties are meant to be worn in public at an occasion you want to look your best. This makes the Mr. T tie an item in disharmony with the cosmos, as it is something that should not be worn in public, on any occasion, for any reason, and will never make you look good, at all. It’s not even a good picture of Mr. T — he looks like a Mr. T midget with a shark fin inexplicably growing out of his back. The only possible use for this tie would be to wear it to the wedding of people that you don’t like and don’t like you. 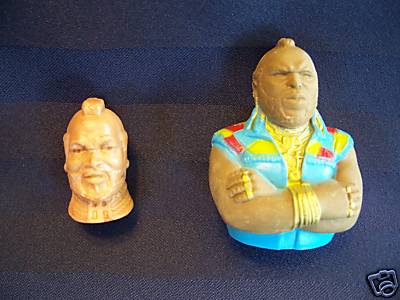 Made a mistake? No problem! Just rub the creepy legless torso of your hero on it until it goes away! Along with his nose! 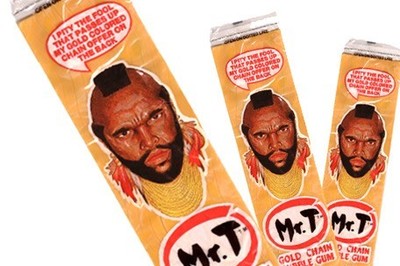 We’ve already established that no one should probably ever want to experience the aroma of Mr. T, but clearly, so how he tastes should naturally be even further down the list. Since the gum is supposed to look like like one of T’s gold chains, one can only assume that the Mr. T gum tastes of gold chains, and that’s probably the best you can hope for. 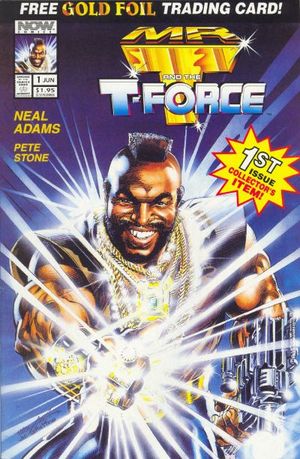 In 1993, long after The A-Team and during a period where Mr. T’s career had taken a downturn, the struggling NOW Comics launched this baffling title because absolutely nobody demanded it. Too late to cash in on T’s fame and far too soon to be enjoyed ironically, the Mr. T comic sat on shelves until it was sent to rest in a dumpster along with early ’70s Monkees records and unwatched copies of Crocodile Dundee in Los Angeles.

The only difference between Mr. T and his A-Team character B.A. Baracus was that B.A. Baracus was terrified of flying. So, of course, some genius made a kite based on B.A. Baracus, and not Mr. T. The kite came with a free glass of drugged milk, which was necessary to get it into the air. 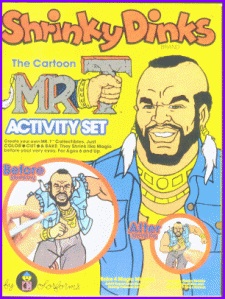 This product is damning evidence that Mr. T obviously let somebody else handle his merchandising approval meetings. No man would be willing to put his name in front of the words “Shrinky Dink” no matter how many dump trucks of money were offered. 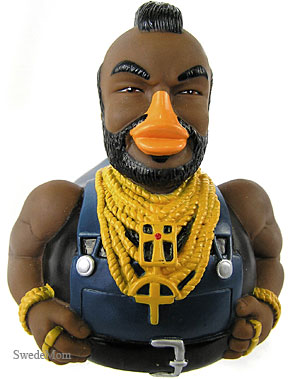 Your child getting into the tub with a Mr. T action figure probably isn’t something you ever need to worry about. However, if they want to get naked with this frightening affront to all things good and holy, and then yes, you do indeed have a problem. 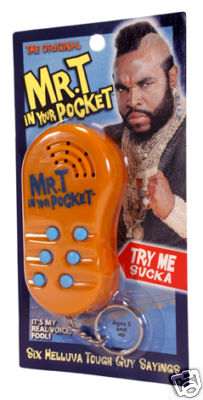 The “In Your Pocket” item in general is really only funny in Spencer Gifts where you can at least annoy the employees with its six quotes. No slight against Mr. T, but the laughs end once you leave the mall parking lot. You’d do best to just drop it off at Goodwill on the way home. 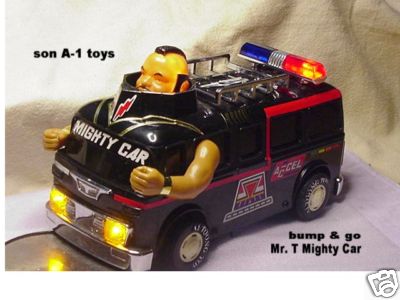 While clearly not a licensed item in any way, one wonders who thought this was a good idea. Either it’s the strange offspring of Mr. T and The A-Team van after a depraved night of passion at the wrap party or some awful, Seth Brundel-esque transportation accident. Whatever the case may be, it has driven straight into our nightmares.