From the mid-1970s to the mid-1990s, promotional glasses
were huge merchandising tie-ins for films and TV shows. Sometime after Batman
Forever brought cinematic misery to theaters (with corresponding etched
mugs being hawked at McDonalds) the trend died. Wild stories about lead paint
and tales of kids injuring themselves and others with the drinkware ensued. It’s
fun to envision middle school toughs manufacturing shivs out of shattered Papa
Smurf glasses, but in reality the premiums were most likely discontinued
because of high production costs. Thanks to Burger King’s recent Star Trek offerings,
the collectibles are back in vogue. Those of you drinking from 32-yeard-old
chipped Darth Vader glasses will especially appreciate this news. In honor of a
whole new era of nerdy drinking containers, let’s take a look at the coolest
fast food glasses ever released.? 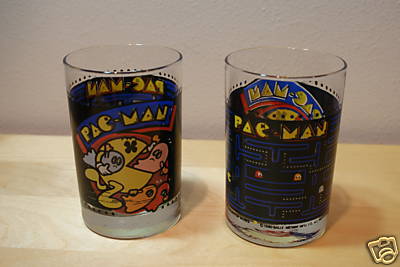 Arby’s is constantly getting shafted by popular culture. The
roast beef-schilling fast food chain has been the target of ribbing from Fargo
and The Simpsons. Even Adam West got in on the act with his recent Batman
Garage Sale video. First off, this is terribly unfair as the restaurant’s
Big Montana sandwich is a carnivore’s dream. Secondly, Arby’s was somehow able
to one-up McDonald’s and Burger King to release glasses based on Pac-Man at the
height of the game’s popularity. An incredibly respectable feat from the
purveyors of Horsey Sauce, wouldn’t you say?

The tired theory that the odd Star Trek movies are shitty
and the even ones are great always overlooks the fact that Star Trek III:
The Search for Spock is really quite awesome. The same can be said for the
four glasses that Taco Bell released in conjunction with the film. Diners who
made the run for the border could scarf down burritos while gazing at the
destruction of the Enterprise and other key moments from the movie recreated on
glass. (Admittedly they did miss a huge opportunity by not making a “David Is
Dead” glass).? Trek completists
also may want to get their nerdy mitts on Dr. Pepper’s 1976 promo glasses based
on the series and the elusive three-glass set that was released in conjunction
with 1979’s Star Trek: The Motion Picture. They’ll look cool in your
cupboard–not that anyone but you will ever see them.

In the glory days before Birdie the Early Bird interrupted
McDonaldland’s sausage party with her mentally handicapped antics, life
underneath the Golden Arches was paradise. To allow customers to share in the
burgertastic fun, Mickey D’s began offering glasses of Ronald McDonald, Big
Mac, Captain Crook, Grimace, Hamburglar and Mayor McCheese in 1977. The
promotion was successful enough that McDonaldland plates went on sale shortly
thereafter. The above clip features a look at the “McDonaldland Action Series”
offerings from 1979 in which Ronald and Mayor McCheese both appear to be
evacuating their bowels. Eating all those fries will catch up to you.

Forget all that Bicentennial garbage, 1976 was all about King
Kong. Rick Baker groupies will attest that the film is kind of a mess, but
that ape something else. The movie’s merchandising blitz gave the public
everything from bop bags to crazy drinking straws–which were perfect to use
with these glasses from Burger Chef. If you didn’t have one of the restaurants
in your neck of the woods, you were shit out of luck–just like Chuck Grodin at
the end of the flick! Substandard paint jobs and collectors who have snatched
up anything even remotely World Trade Center related have made tracking down
complete sets in good condition fairly difficult. Check out the descriptions
from the back of the four glasses:

Yeah! As a proud owner of the subway train one I can tell
you that these are worth every penny you might shell out. If you have don’t
care about paying excessive prices for merchandise based on goofy Jeff Bridges
movies, grab yourselves some online and fill up your empty life with ape fun.

4) Indiana Jones and the Temple of Doom

If thirst has a name, it must be Indiana Jones! The fucking
up of Indiana Jones and the Temple of Doom merchandising wasn’t just
limited to LJN’s action figure line. These jaw-droppingly cool glasses are
amongst the best Indy swag ever released. So naturally they were only available
at the regional food chain TacoTime in 1984. It’s heartbreaking that a drinking
glass emblazoned with the image of Mola Ram holding a still-beating heart
exists and is so hard to come by. Between this and the scarcity of Hasbro’s
recent Temple of Doom assortment of figures, fans of the film have had
to endure plenty of suffering. And that’s not even mentioning Willie Scott.

Imagine spending an afternoon seeing Star Wars then
heading to 7-11 to get a Slurpee in a commemorative Marvel Comics glass.? In that magical geek year of 1977, you
could have done just that. Having previously tested their feet in the waters of
collectible cups with their DC and Marvel tumblers, 7-11 issued a variety of
glasses that featured characters ranging from Spidey and Howard the Duck to
Captain America and Falcon. With treasures like these available in ’77, why
would the folks on Lost ever want to get back to their own timeline?

The second Charles Grodin property on this list, The
Great Muppet Caper was immortalized in this 1981 series of McDonald’s
glasses. The underrated film suffers from the middle child syndrome as it was
the second of the three Muppet movies that Jim Henson worked on during his
life. Alas, fans of the flick could get their (red?) hands on four glasses that
were designed by frequent Muppet illustrator Daryl Cagle. My personal favorite?
The Happiness Hotel bus crammed with the film’s puppet cast. Drinking with
Beaker is bliss.

Along with Kenner’s original action figures, the most iconic
Star Wars collectibles from the original trilogy were the 12 glasses Burger
King issued between 1977 and 1983. You owned them, you loved them, you probably
still drink from them. We here at Topless Robot love you for that. So
many of the sets were produced that you can still get the things dirt cheap on
eBay. More than just your ordinary Star Wars collectibles, they remain
the perfect pop culture tchotchkes.