Pirates. Can’t live with ’em, can’t have free digital media files, bootlegged merchandise or poorly executed kidnappings without ’em. History (and fiction) has been kind to the great scourges of the sea. After all, cantankerous dudes and ladies in Elizabethan garb gone-wrong have kind of come to personify romantic rebellion. One only needs look as far as the alliterative skills of “P” cities for any number of hockey teams proving just that. Though they’re not nearly as fun as the dead kind, modern pirates are making a comeback. In fact, given their propensity to pillage during god-awful economic downturns — pirates are hotter than ever thanks to characters like Pirates of the Caribbean‘s Jack Sparrow (the unnamed 10th member of this list). Unfortunately, most new recruits are too much of a burden to laugh about. That’s why, with a history of harmlessness on their side, Topless Robot celebrates the nine goofiest pirates in the history of nerdom. 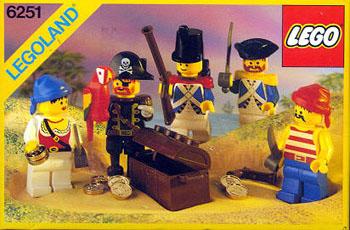 Arguably the most famous of the Lego pirate captains, the exemplary Roger Redbeard comes stocked with all the accessories a pirate needs. Stocked with his Lego parrot, his wooden (um…brown plastic means “wood,” right?) leg, his goofy hat and his tasseled shoulder pads that only history majors know the names of, ol’ Rog’ is ready to tear up bathtubs everywhere in search of gold-painted plastic. Best of all, his ship of bricks actually floats. Lookout easily clogged drains.

Back before McDonaldland was wiped from reality by the Anti-Monitor (a
less long-winded story than the one about Sid and Marty Krofft suing
the crap out of McDonalds for ripping them off), the cantankerous
Captain Crook hung out at “Filet-O-Fish Lake” and acquainted himself
with anybody who had gotten high enough to visit. The lone voice of
reason in a world mad with menu items, Crook grounded those trippin’
balls back to reality with his unceasing frown. The truth is, the
residents of McDonaldland were all victims of misnomery. Crook never
stole, Grimace always smiled and Mayor McCheese was really more of a
city manager (Did you ever see an actual election?). The guy didn’t
deserve the heat he got, especially since he provided such a great
service to stoners in need. Needless to say, Crook was and still is
1971’s greatest anti-drug.

The flamboyant villain in Herg?’s The Adventures of Tintin: The Adventure of the Unicorn and (sort of) Red Rackham’s Treasure,
the dude spends his final days acting like a badass when he’s really
nothing more than a nuisance. He attacks Sir Francis Haddock’s ship,
The Unicorn, and gets blown up. He boards the ship and overpowers its
crew and, again, gets blown up. All he does get away with is hiding
stolen treasure for a few generations – which is later recovered by a
relative buffoon. Being a scourge of the seas is cool and all, but this
just wasn’t very successful. Seriously, he couldn’t even hide treasure
from dudes from the future with access to submarines and radar, which
is really the hallmark of a serious pirate. Somehow fortune has smiled
on Rackham, because Steven Spielberg is having James Bond himself,
Daniel Craig don his trademark red garb for an upcoming Unicorn
adaptation. Well, as the completely made up maxim goes, “unlucky in
pirating, lucky at being put in Hollywood films.”

Zanzibar is a pretty pitiful bastard. Why, if he weren’t on this list,
he would be a serious contender for number one on a list of unloved
G.I. Joe: A Real American Hero characters. Nobody likes this guy, not
even his fellow Dreadnoks – and that’s not mere fan speculation, that’s
according to the bible of Joe lore, The G.I. Joe filecard itself:

“The Dreadnok pirate, he is low even by Dreadnok standards. He is a
smuggler, thief, pickpocket and boat pilot. He pilots the Dreadnok Air
Skiff and uses a spear, gun, and hammer as weapons. Even the other
Dreadnoks dislike him.”

See what I mean? Dirty, grape soda drinking biker dudes from the swamp
won’t hang with Mr. Crazy Side Ponytail. Who can blame them? He totally
splashes people with his air skiff. Jerk.

Captain Crunch’s barefoot nemesis is a foe on par with, nay, superior
to most other cereal villains. He touted a breakfast food many TR
readers are too young to have ever tasted (or heard of for that
matter), but according to the good Captain Horatio Magellan Crunch
himself, Cinnamon Crunch was delicious. The problem is, LaFoote didn’t
believe in himself. He sucked at sabotage and mischief obviously wasn’t
his true calling. If the guy would’ve made like a Disney musical and
followed his heart, he probably wouldn’t have been replaced by the
Soggies.

Rationalize the Orion all you want, the only reason they exist is for kinky Trek
lovin’. There’s nothing wrong with that, per se, but the slavegirls
from this pirate culture are pretty much the only interesting thing
their species has going for it aside from looting Federation cargo
ships. The new Trek film implies that the Orion are more than
*just* pretty green girls and dullard dudes, but just barely. So why
not embrace them for what they were destined to be: A race of space
pirate hussies? The alternative is just highly illogical.

Piracy isn’t all fun and games. Sometimes it involves perpetrating the
unpleasantries associated with a lawless lifestyle. Like murdering —
lots and lots of murdering. So what’s a gentle soul with dreams of
adventure to do? Well, the answer is here thanks to The Wiggles’
resident hearty Captain Feathersword. He does all of the things pirates
do, only in a completely sanitized and bizarre fashion. Instead of
stealing, he dances. Instead of stabbing, he tickles. On the surface
this may seem cowardly and juvenile, but the genius behind
Feathersword’s brand of piracy lies in its misdirection. He’s got more
money than most any pirate in history and he got it by stealing the
hearts of children everywhere. That’s how it’s done.

Well, somebody on the list had to break the tri-corner hat and spiced
rum archetype and make piracy all new wave and shit. Might as well be a
crazed stand-in for an unloved piece of Coca-Cola spokesmanimation. In
perhaps the most obnoxious and surreal act of piracy of the 20th
century, a dude dressed like Max Headroom (complete with flaccid rubber
mask) managed to hijack two different Chicago television station
signals the fateful night of November 22nd, 1987. The first
transmission lasted only a few seconds on WGN-TV during a sports
report. The second transmission, however, lasted several minutes on
station WGN-TV, breaking during, what else? An episode of Doctor Who.
The result is a hilarious and terrifying look into the mind of a madman
and illustrates the true ramifications of stream of consciousness
broadcasting in an orderly society. The best part is, the guy has never
been caught, searing his legendary status into the souls of “the
world’s greatest newspaper nerds” forevermore.

The mightiest freaks sailing the seas of One Piece‘s
fictional “Grand Line” route, this emotionally-scarred yet
frighteningly optimistic group live up to the romantic notions of
piracy by pursuing their dreams and fighting for their ideals. The crew
gets things done, but occasionally comes off as more of a comedy
troupe: Monkey D. Luffy, the leader of the bunch, is a gluttonous, borderline idiot who can stretch his body like rubber; the first mate Zoro is a maniac who wields three swords (one in his teeth!); Nami the navigator is obsessed with money; Sanji, their chef is an easily distracted womanizer;
their doctor Tony Tony Chopper is a reindeer who can’t take a compliment; their cyborg
shipwright Franky is fueled by cola; and the ship musician is a talking skeleton with an afro. There’s simply not a goofier bunch of
scallywags on the seas.