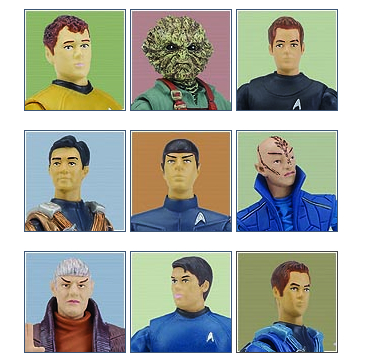 Did you buy Playmates first assortment of Star Trek movie toys? You… you did?

What’s wrong with you? Why would you do that to your self? They were terrible. And as the second wave of figures shows, they haven’t gotten significantly better for the second wave. Cool Toy Review has pics of everything coming down the (Christopher) pike, so check them out here if you’re interested, but here’s the quick version:

You know, I should thank Playmates. When I got done watching Star Trek, I loved it so much I immediately wanted to buy some Trek toys — just because the whole experience was so great. Luckily, the movie toys are godawful, and thus I didn’t. Thanks for saving me money, Playmates!
Tweet Pin It