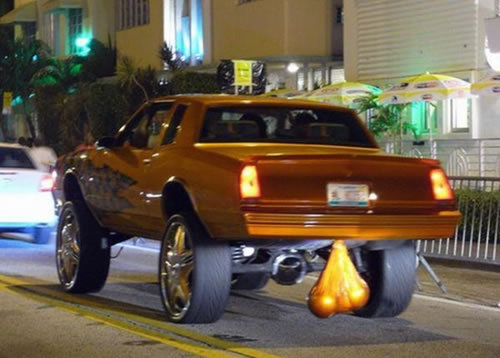 Fuck. Fuck. From Empire‘s review of Transformers: Revenge of the Fallen:

A notable moment occurs during the dementedly frenetic final act of Transformers 2.
A robot-on-robot fracas is unfolding around Egypt’s Giza Necropolis,
with Devastator, an especially massive mechanoid comprised of several
construction vehicles, set on clawing its way to the peak of a pyramid.
As it lumbers up the dusty colossus, a shot tilts up to its
mid-section, revealing two wrecking balls dangling down. Yes, Michael Bay, the man who brought us cyber-micturition in this movie’s predecessor, has one-upped himself: Decepticon testicles.

So now Bay’s not turning the universally reviled Wheelie into a horrible, mincing robo-Pesci, he’s putting balls on goddamn Devastator. On a robot from space. Made up of other robots, which means one of the individual Constructicons has to form the testicles. So. Who wants to defend Michael Bay’s “vision” now?