Watching a movie that prominently features a really cool toy is a
double-edged sword. On one hand, you’ve just found out about some cool toy that
you just have to get your mitts on. On the other, even when you get it, it’s
probably not going to be nearly as awesome as the one you just spent 90 minutes
drooling over because Stan Winston and Pixar didn’t make it, some toy company trying to spend the least amount possible did. Thus, here is a
list of toys from movies that we really wanted, and the crappy actual movie toys we got instead.

5) Turbo Man from Jingle All The
Way

Arnold Schwarzenegger risks life and limb to obtain Turbo Man, the toy every
kid wanted in Jingle All The Way’s alternate timeline of the 1996
holiday season. Not that toys have to necessarily be special to be the “it” toy
of the holiday shopping season, but jeeeeez this guy was lame in real life.? 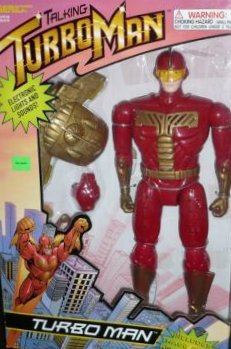 Spouting
such self-congratulatory phrases as “You can always count on me!” in a
voice that sounded more like your neighborhood’s insurance agent Bernie Camden
than a superhero, and sporting an underdeveloped torso that betrayed what was
possibly a mild case of scoliosis, there was nothing terribly special about
real-life Turbo Man that would have separated him from his colleagues on the
toy shelves of the local Kmart. They did manage to nail the elusive wing-light
feature though, unlike a later entry on this list. 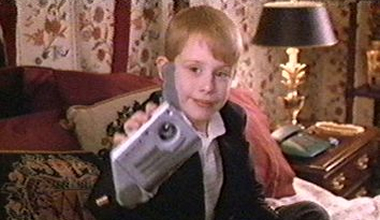 Home Alone 2: Lost in New York served the dual purpose of both acting
as a manual on how to dispose of bungling burglars in the cruelest ways
imaginable, and as a toy commercial for Kevin McCallister’s weapon of choice,
the Talkboy. For those uninitiated, Kevin McCallister used his Talkboy to
thwart suspicious personnel and pull of cool pranks while living by himself on
his dad’s credit card in a five star hotel penthouse like a 5 star bastard.
After seeing this, it was only natural for any kid to want a Talkboy of his very
own in order to have his own McCallisterian adventures.?

Aside from being
cheaply manufactured, the problem with the real-world Talkboy wasn’t that it
didn’t function in the same way that Kevin’s did in the film. To the contrary,
it looked identical, down to the extendo-mic and did everything (and more) that
Kevin’s could do, including recording, tape playback, and slow-mo/chipmunk
voice features. The true issue with the Talkboy was that the shenanigans that
made it so fly in the movie couldn’t possibly come packaged with the product.
Unless you were in Kevin’s exact situation, (notice the best thing the
commercial could come up with was cockblocking your big sister) you were
basically left with a glorified memo tape recorder (in the burgeoning age of CD’s
no less) which is a pretty lame thing to give a 10-year-old to play with, even
though he probably asked for it.

3) Little Bear from The Indian in
the Cupboard

“Wow! My very own Little Bear? This is awesome, I’ll be just like Omri!” Or,
since the plastic warrior that came with your VHS copy of The Indian in the
Cupboard didn’t have magical powers like the one in the movie, you were
more likely to have been left with an accessory-less non-articulated hunk of
plastic that was best used as G.I. Joe cannon fodder.?

Even though it was just a
give away to get kids to beg their parents to buy the flick, it was still a bit
of tease. Who wasn’t hoping their toy tie-in Iroquois would come to life? Maybe
if I try the closet down the hall…

Disgusted with ad campaigns that mislead the consumer, Globotech CEO Gil
Mars (Denis Leary) declares, “I want toys in short, gentlemen, that actually do
what they do in the commercials.” And so, his underlings David Cross and Jay
Mohr go to work, netting a small army of Commando Elite figures and the
opposing mutant gang Gorgonites to fight them. Run by X1000 military weapon
system chips and batteries that never needed to be replaced, these figures came
with light up belt buckles, were voice activated, doubled as walkie talkies and
saluted you right out of the box. Did I mention they walked, talked and fought
each other? Granted, the Commando Elite lead by Tommy Lee Jones’ Chip Hazard
were evil and shot flaming, toaster propelled projectiles at the humans in the
story, but they were still cool.? 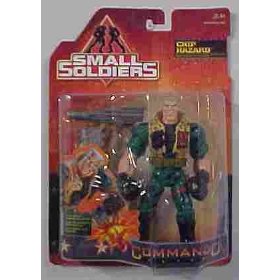 So naturally, this would be a great
opportunity to advance action figure technology in real life, right? While they
would have cost a pretty penny, as long as the toys didn’t try to kill you,
they would have been quite sweet to have. Predictably, the toy company behind
them had no problem taking the beaten path and we had to settle for the same
old, same old blah figures that talked and lit up only when you pressed their
buttons and pretty much just stood there the rest of the time.

What is there left to say about Toy Story‘s Buzz Lightyear action
figure that Andy gets on his birthday? Karate chop action. Light up 12-inch
spring-release wings. A wrist communicator. A retractable space helmet that
would disappear and reappear at the press of a button. Sounds pretty much like
the toy fan’s dream come true right? Unfortunately, the only thing that all of
these features share in common with the real-life version of the Buzz Lightyear
toy is that they aren’t included with the figure. Buzz Lightyear, quite
possibly the coolest toy ever to first appear in a feature film, received one
of the most disappointing real-life action figure treatments ever.?

The original
12-inch Buzz Lightyear sold to us in stores had a piddly six-inchish wingspan,
no light up wing tips, a bad glow-in-the-dark paint job, no wrist communicator
and no karate chop action. He didn’t even come in his cool rocket ship box. To
its credit, the figure did have the laser, talked in Tim Allen’s voice, and
resembled Buzz Lightyear. Toy Story 1 & 2 are being re-released in theaters
this October, along with Toy Story 3 slated for next year, so this may be a
chance for some intrepid toy maker to give Buzz justice. Don’t be afraid, slap
that 3 figure price tag on him. I’ll still buy it. Until then, we can only
dream of what could have been. To infinity…