[Last month or so, Topless Robot sent contributor and noted Heroine Sheik Bonnie Ruberg to Harrah’s Casino in Tahoe to witness the Rock Band Tournament put on by Harmonix and MTV. Held in Harrah’s around the U.S., the winner received $10,000 and the chance to open for the B-52 at House of Blues this past May. She didn’t see that. She was in Tahoe. This is her report.] 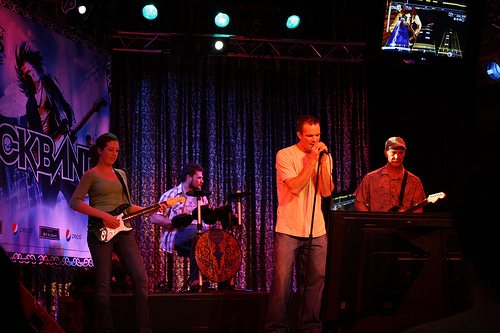 A crowd of old people has already begun to form. Tucked into a corner of the Harrah’s Lake Tahoe casino floor, the stage is set with plastic instruments and flat-screen monitors. Bathed in a tinsel blue light, the guitars, mic stand, and drums seem poised for the appearance of some rock legend with a taste for shoddy equipment. This stage is prepped for a different kind of performance though: one marked by awkwardness, gamer sweat, and endless renditions of the Beastie Boys. This is a Friday night Rock Band tournament, and it’s just – if barely – getting started.

The competition that took place here at Tahoe’s largest casino (which sits unapologetically right across the border between California and Nevada, where gambling becomes legal) was part of contest started in March at Harrah’s around the country. The event culminated May 7, when the winning band “The Gurn Killers” received $10,000 and opened for the B-52s in Atlantic City. Groups registered at local tournaments like this one, then made their way up to the finals; winners were determined by the number of points racked up during each song. Then the Gurn Killlers, those masters of fake music, were charged with appearing at a real rock concert, in front of a real audience full of people who paid to see real music. The poor bastards. They had to put on one hell of a fake show. 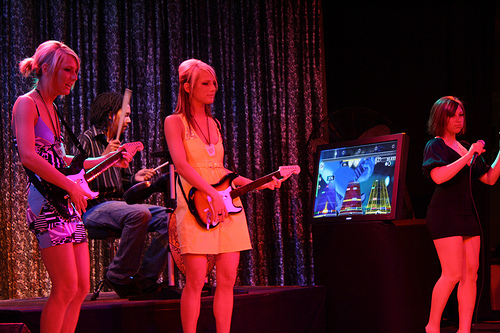 Back on the slot-machine dotted floor, the typical casino crowd needs a little warming up. An MC in a bright red wig kicks things off by begging onlookers – middle-aged women, twenty-something men holding beers, confused elderly gentlemen — for a first round of volunteers. A mom with a bowl hair cut heads up on stage, joined by a would-be guitarist in thick black-framed glasses. Together they stumble through The Allman Brothers’ “Ramblin’ Man.” All players must be at least 21 – combining gambling with under-aged gaming being, understandably, a PR nightmare – but that doesn’t stop teenage girls from gathering on the casino floor’s “age neutral” walkways to giggle and watch.

One of only two registered team to compete this night, “The Day Trippers” — four locals in trucker hats who also rocked out at the previous week’s Tahoe Rock Band tournament — sit on the sidelines, kicking back, cat calling the teens from ten feet away. Competitors can’t go up on stage until their official performance, since practice might give them an unfair advantage. Forty-something cocktail waitresses, like perky school teachers poured into tiny black dresses, buzz around the now-full seating area. A radio station from Reno, 104.5 Pure Rock, has planted a DJ at the back of the room so the musical attempts of the stream of uncomfortable volunteers can be broadcast live. 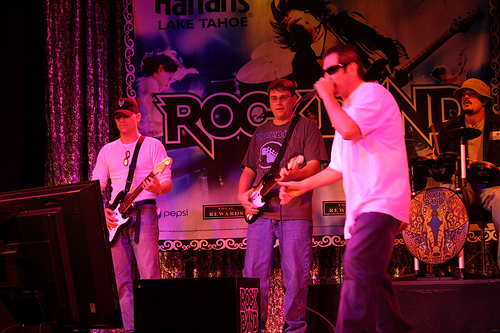 Though The Day Trippers take the night with their rendition of The Red Hot Chili Peppers’ “Give It Away Now,” it’s the newbies who really deserve prizes — from the energetic blond who plays her instrument like an air guitar and never hits a single button, to the boy who sings vocals without ever articulating a word, or the set of super model-esque twins celebrating their twenty-first birthdays by looking gorgeous as faux rock stars. At least they would give the B-52s’ audience something to cheer for.