When you think of people who get screwed over in Star Trek, chances are you think immediately of the “red shirts” — those hapless Starfleet members who die by the dozens whenever they beam down to an unknown planet, or when an omnipotent enemy shakes up the Enterprise. You probably don’t think of women, since Trek has a pretty decent history of female empowerment, even making Kathryn Janeway the captain of a starship, albeit in the worst Star Trek series ever made. But in reality, the only people who die as much and as horribly as the red shirts are women, whether in the Trek TV series or the movies, and it’s actually far more awkward than Kirk’s womanzing. Here now are 10 of those rather misogynistic deaths from the horrible, to the absolutely, positively horrible.

Okay, so, we don’t see the Orion chick young Kirk makes out with near the beginning of the new Trek movie actually getting killed, but it’s assumed that she and a whole slew of cadets were blown to bits at the fight over Vulcan since all the ships besides the Enterprise were destroyed. (I would have prefaced that with SPOILER, but really, something’s wrong with you if you haven’t seen this film yet.) Anyway, Gaila gets used by Kirk, falls in love with him, gets dissed by him, and then excitedly gets ready to go into space, where the ship she is on gets blown to pieces in a few minutes. Happy days! There is also supposedly a deleted scene in which Kirk uses her to hack academy computers, so you know, there’s another way she gets dumped on. Though considering that on Orion the word most often placed before “girl” is “slave,” perhaps this fate isn’t so bad for her.

So, you’re just a belly-dancer on a sensual planet, doing a show, and decide “Hey, here’s a Starfleet officer I’ll take a stroll with on the dark and foggy streets,” except they’re not really foggy, more like someone went to Spencer’s and bought 500 fog machines. Anyway, in a quiet stroll in an alley, you are stabbed a bunch of times. Of course, the rest of the episode focuses on whether Scotty just butchered you like a hog, but it really doesn’t matter to you as you’re dead. Not only dead, but dead with barely any clothes on in some filthy alleyway. Awesome.

The end of the love of Kirk’s life can be summed up like this:
“I’m a kind social worker who is trying to make a difference in this world.”
“Oh no, a truck!”
“Thank goodness this drug-addicted crazy southerner saved me.”
“Now there’s a cute guy who showed up in my life who doesn’t make fun of my for thoughts about space travel, new energy sources and a peaceful society!”
“My life is looking up!”
(All of this is erased)
“Oh no, a truck!” 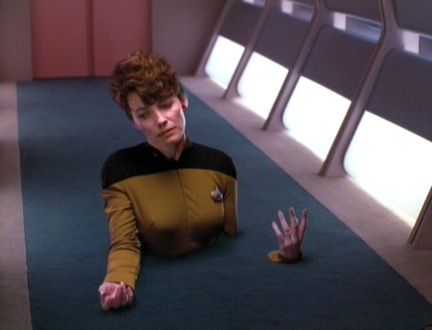 The Star Trek: The Next Generation episode “In Theory” is mostly about a Data tackling a problem most Star Trek fans find almost insurmountable, and that is being in a relationship with a woman. The other part of the story is a series of subspace holes that cause parts of the ship to disappear and re-appear. Lt. Van Mayter here ends up getting melded with a deck when the floor disappears then reappears, melding her with the deck. There’s not much else to her backstory, but no matter who she was or what she’s done, you have to admit this is a pretty terrible way to go. I mean, just look at that picture. Disturbing. Not only that, but I’m presuming they just didn’t vaporize her body with a phaser and had to cut her out of there to get the body removed, right? Ugh.

If you saw the recent Star Trek film, you know her as “that woman who screams, gets sucked into space, and gets smashed against a phaser turret” — surely one of the most horrible ways to die that one can imagine in Star Trek. She doesn’t have a name, but everyone in the Star Trek universe eventually gets their own bac-story eventually, so I’m sure she will get a name and a loving family who will miss her dearly. That family will see her off to the spaceport as she embarks on her very first mission on the U.S.S. Kelvin, full of hope and wonder to be a Starfleet Officer on a mission of exploration, her long, amazing life ahead of her, and then — scream, whoosh, thunk.

Ms. Thompson and another crew member get transformed into a crystalline block by a guy from the Andromeda galaxy. Then he crushes her into dust and restores the other crew member, just because he can. Now, I would blame the writer having a bitter intense hatred of women for this really messed-up way to tie, but one of the writers was D.C. Fontana, a lady. Then again, maybe she was writing from personal experience. I mean, ladies, how many times has a guy reduced you to almost nothing and then crushed what was left just because he could? Yeah, you know it.

So, the several hundred-year old symbiont Trill, which is in the young body of Jadzia, with a very nice life with Worf ahead of her — smashing things, yelling, getting drunk — gets killed by Dukat, who needs to mess up one of those Prophet Orbs forgotten about fo
r several seasons. Actually, it’s not Dukat that kills her, but The Dark Side of the Forc– I mean, the magic of the “Pah-wraith,” which sounds like an unwanted Christmas present from Hickory Farms. In the afterlife, Jadzia goes on to spend years in purgatory, toiling away on an unfunny sitcom starring an elderly Ted Danson.

In a stunning move, a black oil slick known as Denise Crosby’s career choice comes up and whacks her right out of the main cast of Star Trek: The Next Generation. The sentient oil slick is merely one of those super-powerful evil beings that seem to populate the Star Trek universe so readily, like some sort of gooey Dick Cheney. Tasha Yar doesn’t just die, though; she spends several minutes under the care of Dr. Crusher who attempts to revive her with all the passion of a person trying to fill out a crossword puzzle. Oh, and Yar has a big splotch on her face. People who get killed by aliens get splotches. Of course, she doesn’t really die. She keeps coming back through time travel, or alternate dimensions, or the need for Denise Crosby to collect some paychecks.

This Lieutenant navigator is a Deltan, which means they shave their heads and have to take an oath of celibacy. So, being a Deltan means that you have to not only have to go without hair, but you have to go without sex as well, which, if human history is a guide, only means it is a matter of time before the Deltans having sex with anything that isn’t strong enough to fight back. Adding to her own personal frustration, she’s on a ship with a guy she really would like to have sex with, Commander Decker. So, frustrated, horny, and bald, she gets zapped by a giant beam of light and dies, only to have herself copied by a robotic alien race so they can have an emissary that not only looks funny, but talks funny as well. At the end of the film, her duplicate becomes one with the cosmos or whatever, only to be copied by Gene Roddenberry for the character of Deanna Troi, which is a fate much worse than death.