Admit it Doctor Who fans: You’re more excited about the Torchwood miniseries starting tonight than any of the upcoming specials involving your beloved Time Lord. Sure, last month’s Doctor Who: The New Doctor was a welcome and entertaining fix, but Torchwood‘s Children of Earth will be appointment TV. The July 26 airing of Doctor Who: Planet of the Dead? August will arrive before many of you get around to watching it.

And that’s okay. Showing a little favoritism toward Captain Jack Harkness and his Torchwood crew makes sense. The chilling “We are… We are coming” commercials have the sci-fi fandom buzzing with anticipation for CoE. There’s also the simple fact that spin-off Torchwood has simply become the better show. With that in mind, we present five reasons why we watch Torchwood live and DVR Doctor Who. 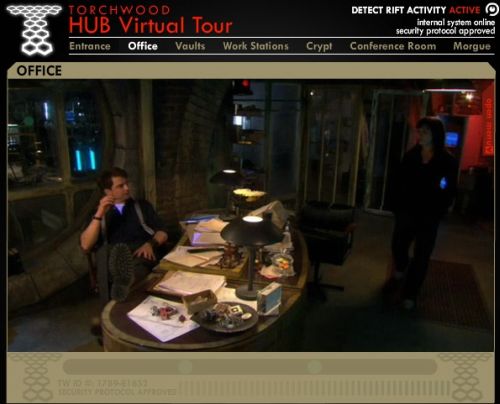 When was the last time we got more than a glimpse inside the Tardis? Other than the Control Room, the Doctor hasn’t shown us his digs in ages. The Hub, on the other hand, has an open-door policy for fans, not only through the show but online via a virtual tour.

With its hidden entrances (the underground Hub has two: an elevator concealed by a perception filter and a door inside a tourism office), high-tech work stations, a crypt and weevil-filled vaults, Torchwood HQ itself has become another character on the show. One with plenty of screen time.

As awesome as the Doctor’s sonic screwdriver is, the Torchwood team has access to a stash of advanced technology – human and alien. Camera contact lenses, amnesia pills, portable prison cells and the Resurrection Gauntlet, which allows the wearer to bring back the dead for a short period of time, all come in handy when trying to save the world.

The other-wordly beings on Doctor Who – Cybermen, Daleks, Sontarans – are meant to be look cheesy, so let’s not waste time debating production values between the two shows. Focus instead on the intent of the alien races that end up on Earth. On Doctor Who, the majority want to destroy or conquer humans. Because of the rift of time and space – upon which the Hub sits in Cardiff, Wales – the aliens on Torchwood often end up there accidentally, and sometimes they mean no harm. It’s nice to feel like the entire universe isn’t out to get us, every episode or so.

2) Much, Much Better Sidekicks

Ianto Jones (Gareth David-Lloyd) has come far since the start of the series. Introduced then as a sort of Guy Friday, he has survived what other team members have not and proven himself to be more than just the guy who “picks up after the others.” He’s also Jack’s lover now, adding an element to Torchwood rarely – if ever – seen on a sci-fi show.

1) Captain Jack Is Awesome and Sticking Around

Torchwood fans, though, can’t imagine the show without John Barrowman and Jack. Lucky for us, Barrowman has said in recent interviews that he has no plans to vacate the role. That consistency will keep fans loyal and engaged, as will the ever-evolving character’s complexity: Jack remains hopeful about life and humanity, which considering his immortality easily could have swung the other way; and he may be with Ianto now, but the romantic tension between Jack and the now-married Gwen remains. Who knows what awaits our beloved Time Agent? For those of us who have resisted reading the spoilers about CoE, we’ll find during the five-part Children of Earth, which airs tonight through Friday at 9-10:15 p.m. ET/PT.