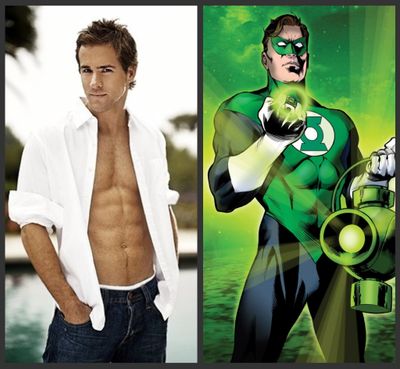 Well, that was fast. In my first genuine, breaking, post-after hours big news article, Variety says that Ryan Reynolds has been awarded the lead in Warner Bros.’ Green Lantern movie, to be directed by Martin Campbell (who did both Goldeneye and Casino Royale, my two favorite Bond films besides Goldfinger).

Three thoughts here: 1) I am sure that effectively nixes Reynolds’ involvement in a Deadpool movie, just as I said earlier. Green Lantern will be a big franchise, and it’ll keep him very busy, even if Warner/DC hasn’t outright forbade him from appearing in future Marvel movies in his Green Lantern contract. That is, unless… 2) it doesn’t get made, because there have been what seems like several hundred DC movies with cast members signed and even directors ready that just disappear into the ether, like Justice League or Superman Vs. Batman or Wonder Woman or whatever. Everyone’s acting like this Green Lantern is really getting made this time, but is it really? Who knows? Not me. All I’m saying is I wouldn’t feel safe putting money down that Green Lantern is definitely going to happen. Yet. Finally, 3) no matter how much you wanted a Deadpool movie, if you like Ryan Reynolds — and he seems to be a nice, nerdy guy with insanely chiseled abs but with a devastating inability to wear shirts — you have to admit this is a much better choice for him. A Green Lantern movie is a much higher-profile character and a potential film franchise. It’s very clearly the right move.

Hey, look on the bright side, Deadpool fans. When the Green Lantern figures come out, maybe you can customize a few of them in to a Reynolds Deadpool.