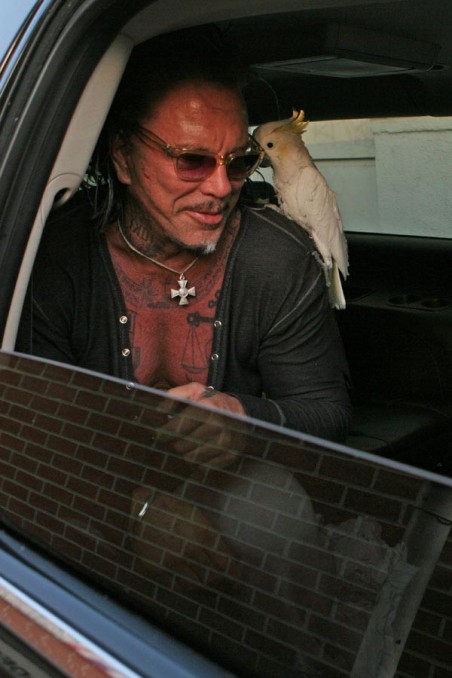 So some of you guys helpfully figured out that that Gwyneth Paltrow pic was from an old issue of Vogue magazine, and thus has no bearing on the film. Topless Robot apologizes for the error; I’m not sure how or why it started making the nerd rounds as news yesterday. So please, take this absolutely insane tale of Mickey Rourke on the IM2 set as an apology:

Rourke, for his part, wanted to instill some lightness into the role. “I
told Favreau, ‘I don’t want to just play him as a one-dimensional
p—,'” he says. “He let me have a cockatoo, who I talk to and get drunk
with while I’m making my suit.” [EW via FilmDrunk]

Wow. Just… wow. You know, I really wonder if that’s how it. It seems just as likely that Rourke went up to director Jon Favreau and said he’d eat his eyeballs if someone didn’t bring him a cockatoo immediately. Or, that Rourke was already drunk and muttering to himself during his scenes, so Favreau had to put something in for Rourke to be talking to other than his DTs. I understand this is a weird addition to the Whiplash character, but c’mon — I can honestly say I think most B- and C-list villains would be improved immensely if they each had their own birds.