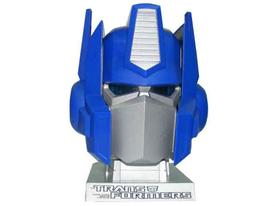 Oh, for fuck’s sake. That’s your Optimus Prime speaker idea? Just use make his severed head, and have two pieces which have never moved before swing out to awkward reveal speakers and make Optimus looks like his head’s been smooshed by Bruticus? That isn’t worth $50; hell, it isn’t worth $10.

This isn’t that hard, people. Either make a full body Optimus, and hide the speakers in his cab, or — and this would be even easier — hide them in his cargo trailer portion, like the Japanese did when they made that sweet Optimus Prime MP3 player. The only person I can think of who would want to buy this piece of crap is Megatron, so he can have a laugh while listening to the new Wilco album. (Via Gizmodo)