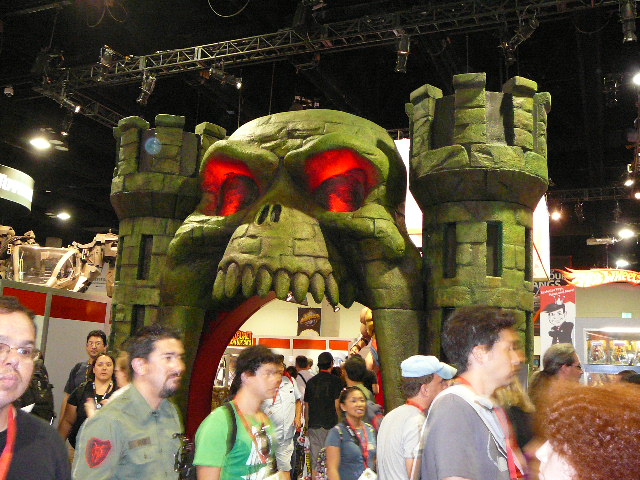 Greetings, folks! I am alive and at SDCC, where I have to report that… well… there’s not much going on. Oh, there’s a lot of people. There were several million people who showed up for the “exclusive” Wednesday Preview Night, making it difficult to walk around the dealer’s floor last night — I’m genuinely terrified of what it’s going to be like on Saturday. But in terms of awesomeness, there’s just not a lot going on. No major nerdy film displays except for Iron Man 2, very few awesome displays of any sort except for a big Castle Grayskull from Mattel. 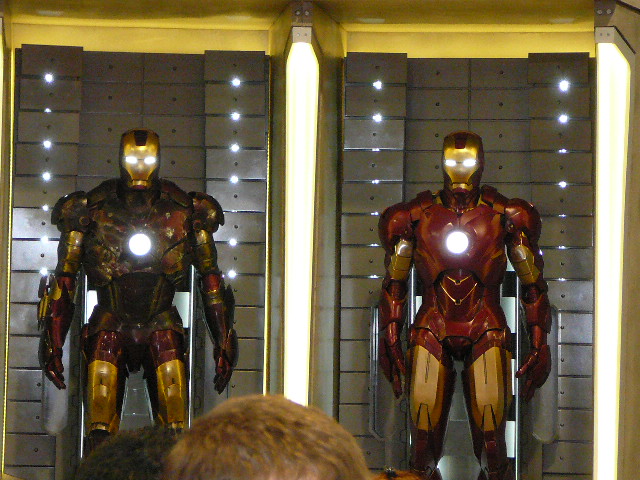 Let me give you two examples of the underwhelmingness of the material on the show floor — the coolest thing by far is the hall of Iron Man movie armor at Marvel, where they have all three armors from the first movie, and the new Mark IV armor from next year’s Iron Man 2 flick. Cool, right? Well, yes… except that the Mark IV armor looks almost exactly like the Mark III armor. It’s slightly different, but you have to star at it a minute to see how. It’s neat, it’s just not amazing.

Better example — the second coolest thing at the show might by the car from Seth Rogen’s upcoming Green Hornet movie, which… is not very exciting at all. It’s also currently got a tarp on it; I don’t know when it’s getting revealed. But it’s either a cool ’40s-style thing or, less likely, a weird sleek green sports car. Both of which will be neat, but… not mind-blowingly so.

Here’s the worst part at the moment — Twilight. I really don’t have any problem with SDCC having a Twilight panel, and it’d be cool if there was some way to harness all those screaming teen girls to get interested in the other aspects of Comic con, although I don’t think much of an effort has been made in that direction. But! At 6pm last night, several thousand peopls weree camped out to see the Twilight panel that will be shown this afternoon. The the Twilight fans have effectively taken over Hall H, meaning if I wanted to see the Disney panel with Tron 2 — and I really, really did — I would have had to get in line… yesterday at 6pm. This does not make me happy.

I don’t want to sound ungrateful that I’m here; it’s certainly cool, and I’m looking forward to covering the panels I can get into. But if you couldn’t make it out, please don’t let it ruin your sleep.

Also, this statue of Bumblebee totally peed on me. It’s like he knew, man.