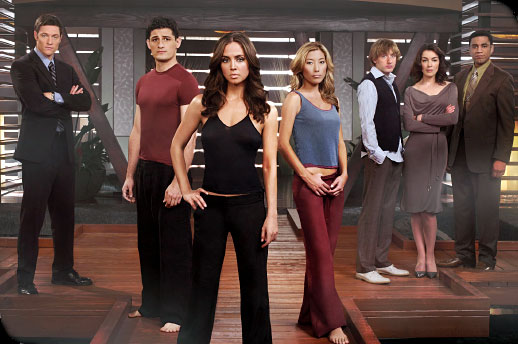 ?
? If you don’t want any Lost spoilers, just skip to the next section. The rest of you, get ready — Daniel Faraday and Juliet will show up in some way in season 6. More intriguingly, Cuse and Lindelof showed an “In Memoriam” trailer for all the characters who have died in the show so far. Noticeably absent: Juliet and Claire. Hmm…

? By all accounts, the Futurama panel was kind of sad. Whatever that Fox “live decision” thing they had planned on doing was canceled, and none of the voice cast showed up. Cohen and crew couldn’t comment on any of the negotiations, and all they could tell the crowd was “cross your fingers.” That’s super, super depressing. But thanks to Brittney Le Blanc for the assist in covering the panel.

? I had really, really wanted to see that final season one Dollhouse episode, but as I’ve previously mentioned, it’s been practically impossible to get into panels unless you wait a minimum of two or more hours in line.The basic gist is that the episode was merely a “what if?” and we’ll be back to pre-apocalypse next season — a next season which will include appearances from Buffy alums Alexis Denisof, Summer Glau and Felicia Day. If you want all the gory details — and these will likely show up in season two, so consider them mega-spoilers — check ’em out here.