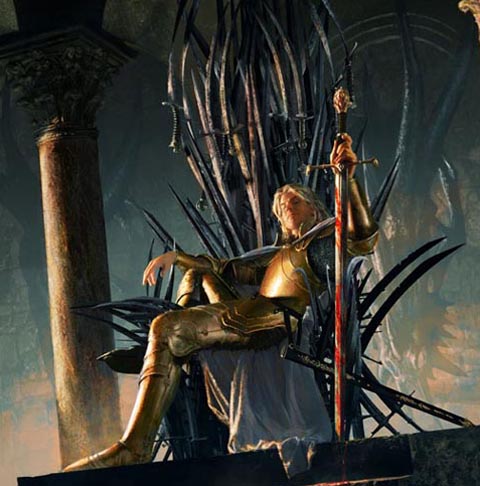 To the folks who voted for a movie of George R.R. Martin’s A Song of Fire and Ice series in this week’s Sci-Fi/Fantasy Books Which Desperately Need to be Movies Daily List…good fucking call. Because HBO is ordering a pilot based on the fantasy novels, to be titled A Game of Thrones after the first novel.

The idea of HBO using its considerable resources and talents on a full fantasy series (chock full of dragons and magic and shit) kind of blows my mind; I haven’t read Fire and Ice, but I’d sure as hell check out any HBO show of it. Now, admittedly, this is only a pilot, and no guarantee it’s going to get picked up. But the Hollywood Reporter has some interesting thoughts and info:

Also, the success of “True Blood” may work in “Thrones’ ” favor. HBO has always sought to defy any sort of specific genre branding for its network, emphasizing that each project is judged on its own merits. Yet given how the vampire drama continues to gain viewers and how Showtime’s swords-and-monarchy historical drama “The Tudors” has performed, it’s not unreasonable to believe the network may see “Thrones” as a good fit.
…
The cost of producing a fantasy series is usually a factor that deters networks. The producers note that “Thrones” is written as a character drama and major battles often take place offstage. “It’s not a story with a million orcs charging across the plains,” Weiss said. “The most expensive effects are creature effects, and there’s not much of that.”

Martin plans seven books. If HBO picks up the project to series, the producers intend for each novel to encompass a season.

Like, if everyone who suggested their favorite sci-fi/fantasy book/series earlier this week had their wish, wouldn’t we all want an HBO series? It’ll have plenty of episodes to do the stories justice, since it’s pay cable there likely won’t be any dumbing down of the source material, and HBO usually hires pretty talented people for their shows. If HBO meddles in anyway, it’ll probably be to add some sex and nudity to the series, assuming Fire and Ice doesn’t have any already. And I imagine the people who will be irked by that are firmly in the minority.