Children of the ’80s who had been immersed in Generation 1 Transformers were in for a shock when Beast Wars debuted in 1996 and began by reintroducing Optimus Prime as a little blue bat named Optimus Primal and Megatron as a spindly green robot who turned into an alligator. Outrage spilled out onto Usenet, with an argument derisively summed up by some as, “TRUKK NOT MUNKY!” Yes, the Transformers had ditched their vehicle forms in place of organic animal disguises, and few of the original characters were anywhere to be seen. But Beast Wars soon won over fans with its very articulated toys, excellently written TV show and, ultimately, the revelation that the Beasties were the descendants of the original Transformers, occupying prehistoric Earth along with the crashed ships containing their dormant ancestors. Harmony was restored. And the truth is, Generation 1 (and Generation 2) had croaked and the success of Beast Wars was likely instrumental in keeping Transformers alive to this day.

However, one thing Beast Wars proved is that mixing robots with organic features can cause some really bizarre results. The original Transformers had touched on the idea briefly with the Pretenders toys, but Beast Wars plunged head-on into the disturbing image of robots wearing animal parts. Some Beast Warriors reached a whole other plateau of weird, though (especially with the toys exclusive to Japan). Here are the 12 strangest Beast Wars figures. 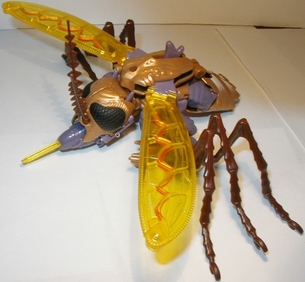 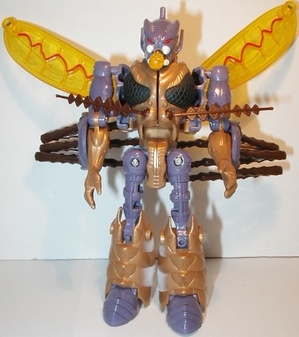 “Transquito is hated by all who know him,” proclaims this evil Predacon’s tech specs. Of course he is; everyone hates mosquitoes! Especially one that can transform into a robot that resembles something out of Buck Rogers and can fire his big, disgusting proboscis like a missile. It’s no wonder that Transquito was one of Beast Wars’ biggest shelfwarmers. Of course, all you needed to defeat this monstrosity in battle was a can of OFF! 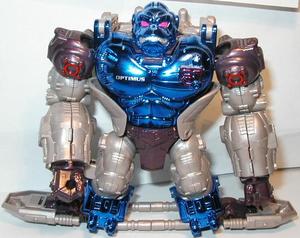 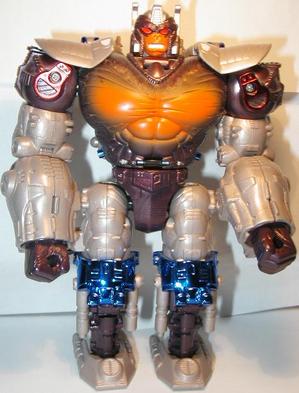 In the (awesome) Beast Wars cartoon, a quantum surge converted most of the Maximals and Predacons on Earth into new Transmetal forms that made them closer to their non-organic Cybertronian forms but rendered them utterly useless at blending in with Earth’s fauna. It made for some cool toys, though, so we didn’t mind too much. Optimus Primal received one of the strangest upgrades, being able to turn into a shiny blue, metallic ape (due to the vacuum metallized paint of the toy) who flew around on a hoverboard whilst wielding a pair of maces. It was an odd design choice for the leader of the Maximals, but he rolled with it. By the way, vac-metal paint has a nasty habit of flaking away like dandruff from some of the Beast Wars toys, proving that a radical 1990s toy deco could sometimes cause pain and emotional distress for toy collectors in the long run. 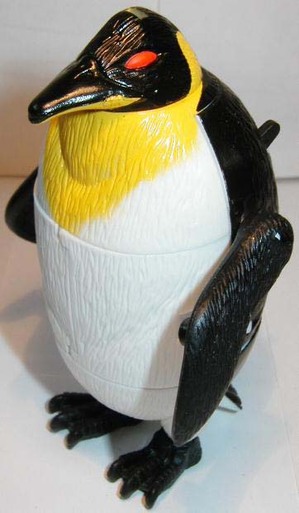 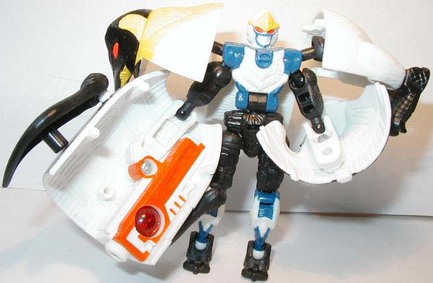 American Beast Wars toys by Hasbro/Kenner tended to stay within a predictable safety zone of animals that were both formidable and perhaps easier to design. Takara (Hasbro’s Japanese counterpart), though, was more creative and dynamic with its exclusive toys for the Japanese market. There were giraffes, snakes, horses, rabbits and many other animals you would see in a zoo or on the farm but not in Hasbro’s toyline. Break, from the totally awesome Beast Wars Neo series of toys in Japan, turns into a giant emperor penguin. It’s certainly one of the last animals you’d expect to see waddling at you from across a battlefield, but as you’re bent over in hysterics, he’ll transform into his retro-G1 Targetmaster gun mode and incinerate you for laughing at his not-so-happy feet. 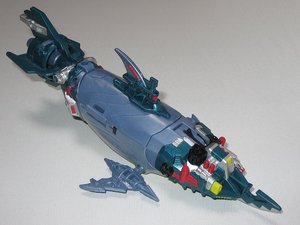 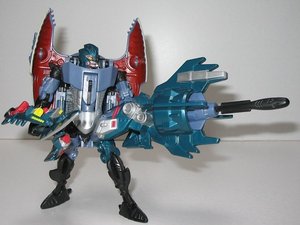 As a robot that transformed into a convincing organic shark, the Maximal Cybershark had a perfectly sensible disguise for blending into Earth’s oceans. Hellscream, the Japanese retool of the Cybershark figure, made a bit less sense. His alternate mode was something that looked like a shark designed by HR Giger – loaded up with cybernetic components, a sawblade nose and a tail that looked like a submarine propeller. Of note is that Hellscream was the upgraded form of the Predacon Starscream from the Beast Wars II continuity. 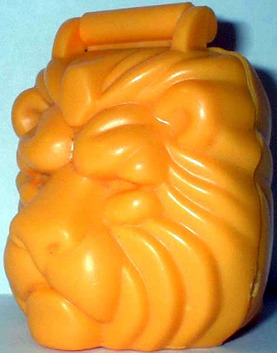 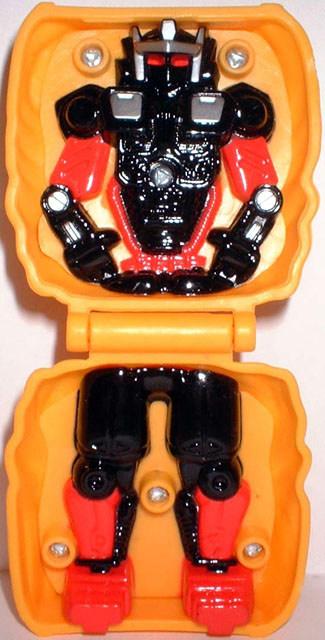 Poor Under-3; he really got the short end of the French fry. No one bothered giving him a real name, leaving him with the functional title of a Happy Meal toy made for a customer base who could barely gum a chicken nugget. Made with zero parts that could easily be broken off and choked on, Under-3 had the misfortune of being a disembodied lion’s head that opened its maw to reveal an Optimus Prime-like robot within. Under-3 seemed less like a Transformers and more like a bizarre art deco sculpture of an Autobot who had been swallowed whole by the Cowardly Lion. 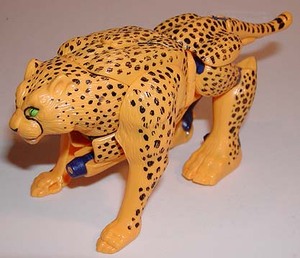 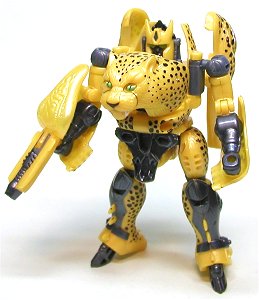 Cheetor was one of the main characters of Beast Wars, the kid-appeal Bumblebee/Hot Rod character of
his era. His first toy included some of the subtle but totally disturbing features included on the early Beast Wars figures. He included an extra “mutant head” that looked like a horrific Mardi Gras mask. But most unsettling were his weapons. One gun was made from his butt, with a gun barrel hidden under his tail and seemingly sprouting from his poop shoot. And the other gun was made of his intestines, which were sculpted in detail and functioned as a working squirt gun. Although it shot water, we all knew it wasn’t *really* water. The G1 days of colorful laser battles were over… Instead, the poor Predacons were getting double-doused with cheetah crap.

Pillbugs were those not-so-fearsome bugs you’d find in your yard as a kid that would curl up into a little armored ball when you poked them with a pencil. You wouldn’t want to be poking Retrax with any writing implements, though. This Predacon robot and pillbug folded up into what looked like a demonic Pac-Man. However, whatever menace he had immediately eroded when you learned that Takara (the Japanese counterpart to Hasbro/Kenner) recolored Retrax into a loudly colored, red, white and blue good guy named Powerhug. Beware, evildoers, the power of hugs! 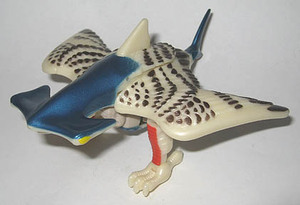 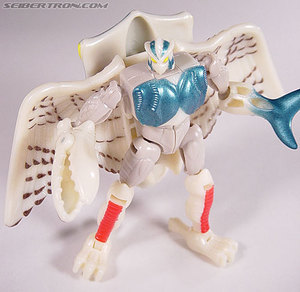 The Fuzors subset of Beast Wars is so strange that they all deserve at least an honorary mention on this list. The story behind them was that the stasis pods carrying the shapeless protoforms of these Transformers malfunctioned when choosing animals for them to turn into, blending together two disparate beasts. A prime example of this weirdness was Air Hammer. The concept of a shark that can literally fly from the water on hawk’s wings high into the sky, chase you down on land and eat you is truly scary. However, Air Hammer has a certain je ne sais quoi that makes him more laughable than frightening. He reminds one less of Jaws and more of the Flying Toasters screensaver in After Dark. Thankfully, as a heroic Maximal he was more hungry for justice than for human flesh. 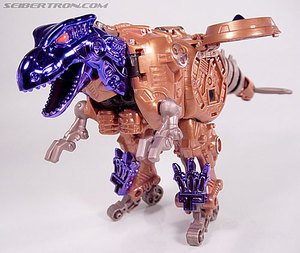 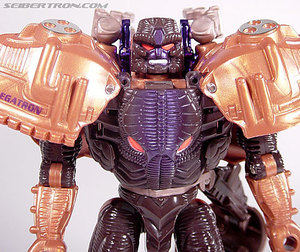 Just like Optimus Primal, Megatron received a Transmetal upgrade that strode a fine line between laughable and awesome. His alt mode wasn’t just a boring old T-Rex anymore, no. It was now a robot T-Rex that was equipped with jet turbines and roller skates. Off to the roller disco, my Predacons, yesssss!!! Just a note: If you have this toy, be very careful with it. Its bronze-ish parts tend to suffer from a condition similar to Gold Plastic Syndrome (GPS, for short), in which the plastic crumbles to dust. Megatron’s waist is known to snap in two like a wishbone. Although time hasn’t been kind to this awesome toy, the Japanese version reportedly does not have this problem. 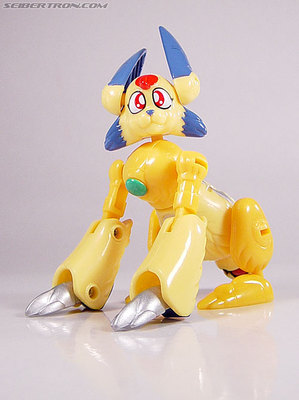 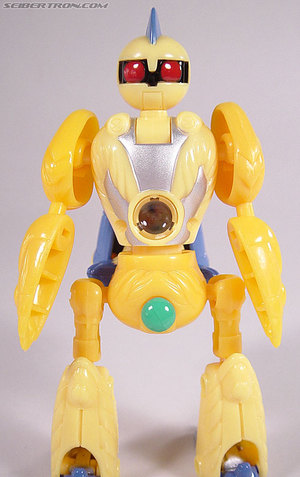 Ah, just what the hell is Moon? He’s not one of the initial 151 Pokemon, although he could have fit right in. Moon was a goofy-looking robot who transformed into an even goofier-looking rabbit. And he had a Viewmaster-like device in his chest that displayed pictures of various Transformers. He was basically the Uatu, The Watcher of the Beast Wars II universe, watching the battles between the Predacons and Maximals from his vantage point on the Moon, occasionally siding with the good guys. 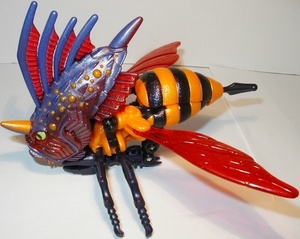 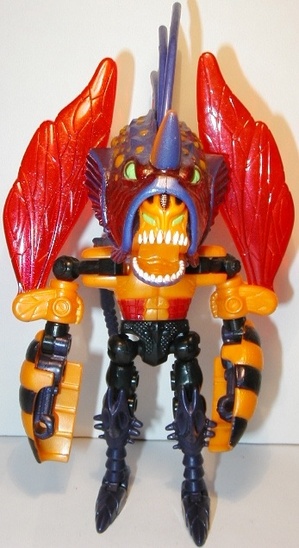 Another fish/flying creature hybrid from the Fuzors line, Injector was possibly the kind of monster that even Unicron had nightmares about. Injector was part lionfish, part hornet, and all freakish hellspawn. I don’t know what’s more likely to induce spontaneous pants-messing – the giant fish head he wears even in robot mode, or the gaping, sharp-toothed robot mouth he’s got inside of that one. He’s also got spines on his head that pop up at the pr
ess of a button and he can shoot his stinger like a missile. The only thing he’s missing is your soul, which I assure you he will attempt to capture if you stare into either set of his eyes for more than five seconds. 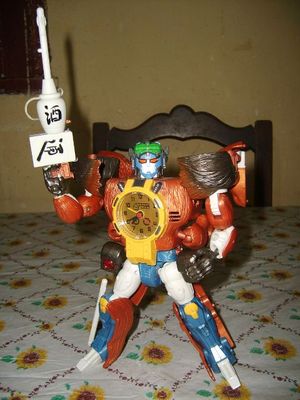 Heinrad is perhaps the greatest Transformers toy ever made, and let me tell you why. He’s like the Doc Brown of the Maximals, containing a working alarm clock in his stomach that, in the fiction, allowed him to briefly stop time and phase between different points in time. He also rocks a badass pair of goggles. Heinrad (sometimes known as Heinlad, likely due to translation issues) transforms into a Tanuki, a Japanese Raccoon Dog. It is a real animal but is also a prominent trickster character in Japanese folklore. Like the Tanuki of folklore, Heinrad carries a purse full of notes payable and a jar of saki, from which he liberally swigs. Unlike the folklore, Heinrad can combine the purse and saki into a missile-firing blaster. The actual Tanuki is known for its comically large testicles, and the Japanese of yore blessed the fictional Tanuki with even larger balls, which it would sling over its shoulders like an *ahem* sack and beat madly like they were drums. And, yes, Heinrad is anatomically accurate. He’s got a nice pair of robo-balls positioned beneath his alarm clock tummy. See, Devastator in Transformers 2 wasn’t the first Transformer to have a scrotum!