Menu
Home
>
Comics
>
The 7 Worst Underoos Your Mother Ever Bought

Why your mother? For a couple of reasons. First of all, chances are you never spent your hard-earned allowance money on underpants, with or without superheroes plastered over them, so any underoos that you wore were likely purchased by your mother or a similar legal guardian (hopefully). Second of all, if you had to buy underoos as a kid — or more likely, were forced to join your mother on a clothes-buying shopping trip — these are not the ones you would have purchased. These underoos were only bought by parents, perhaps confused yet well-meaning, not knowing they should be picking up the Darth Vader and Superman sets… or by parents who didn’t give a shit and just needed some children’s underwear. Here are the least cool underoos sets you ever put on.

There’s nothing uncool about the Incredible Hulk, but his underoos were significantly less badass than their green comic counterpart. All the other superheroes had cool costumes which were modified into their underoos, allowing kids to pretend they were actually dressing up like superheroes. When you had these underoos on under your regular clothes, you got to pretend you were disguised in your secret identity and had super powers! However, the kid wearing the Hulk underoos knew that underneath his cloths were crappy white underpants with a picture of the Hulk on them. 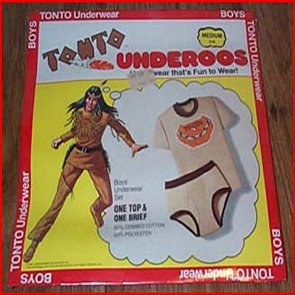 Nothing says “the store was sold out of Lone Ranger” more than having Tonto underoos. That is, if you even knew who the Lone Ranger was — these things were bafflingly made in 1980, not 1959. Fun fact: there was not a single child in the entire world who would have wanted a Lone Ranger underoos set over a Star Wars set in 1980.

While most of us would like to have Archie’s female troubles — specifically, having a hot blonde and a rich raven-haired temptress fight over our body — in our teens, not very many young boys probably want to be Archie Andrews. This is because not many young boys read Archie, unless they have an older sister and are bored out of their mind. Wearing Archie’s underpants is even less appealing. 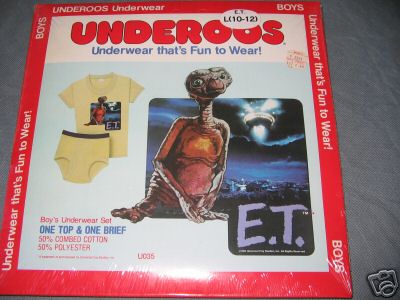 What child doesn’t want to pretend that underneath these cloths he’s a hermaphrodite alien with a candy fetish that lives in a child’s closet? Probably most of them, actually. We guess Eliot underoos were too boring, although they’d have made more sense. And Steven Spielberg probably knew even in 1983 that Drew Barrymore underoos were just a bad idea waiting to happen. 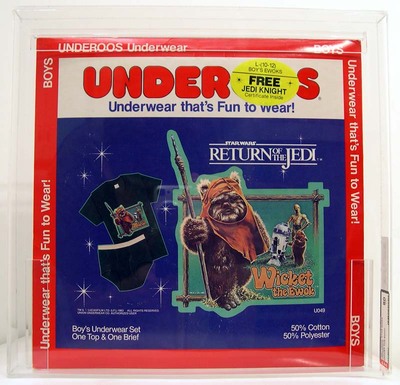 Look. Wicket’s fine. The Ewoks are fine. We’re not knocking the Ewoks here. But the underoos brand offered a wide variety of choices when it came to Star Wars and Return of the Jedi, including Boba Fett, Han Solo, Leia, Luke Skywalker in his fricking X-Wing pilot outfit…. hell, even C-3PO. These were all a jillion times cooler than Ewok underoos. 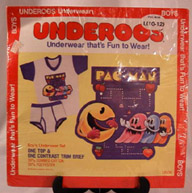 Actually, Pac-Man is a pretty awesome choice for an underoos set. Unfortunately, it does mean you’re dressing your child in underpants adorned with a creature best known for gobbling balls. That’s… that’s not good. 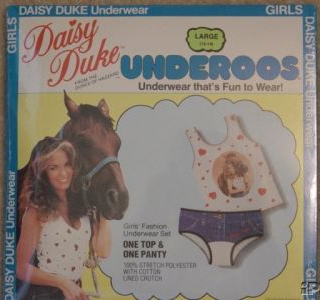 While it seems innocent now, the sexy “short shorts”-wearing southern siren from Dukes of Hazzard paved the way for little girls to idolize dressing like a harlot. Lord only know what irreparable damage this did to our nation’s collective psyche — and given the popularity of ever-younger skanks in pop culture, the damage appears to be massive. Frankly, these Daisy Duke underpants might be directly responsible for the chain of sluttiness that led to Paris Hilton. The horror!