So yesterday I received a box, as I’m occasionally wont to do — inside was most of Hasbro’s 2009 San Diego Comic Con exclusives. Once I stopped cackling with joy, I made two decisions: 1) Topless Robot, effective immediately, will now become a huge Hasbro shill site (stay tuned for my week-long segment, “50 Reasons the G.I. Joe: Rise of Cobra Movie Will Be Awesome,” 10 reasons per day! Reason #36: Channing Tatum is the dreamiest!) and 2) I needed to do a post on Hasbro’s exclusives specifically, because there’s a lot of them, and a lot of them are better than you might be thinking. Here’s what the box contained: a 12-inch Rise of Cobra Baroness, that 3 ? Destro Legacy two-pack, two Star Wars figures, a Marvel Universe Invaders four-pack, a black-&-white Marvel Universe Captain America, a My Little Pony (one of the artsy ones), the classic Transformers Soundwave re-issue, and an Optimus Prime Mighty Mugg. Hit the jump for pics and utterly biased praise discerning commentary.

This is the first thing I opened, and I’ve got to admit, I was surprised. I mean, we all know how horribly the 12-inch Cobra Commander turned out. But Hasbro’s calling this 12-inch figure an “adult collectible” which apparently means “not shitty.” She’s not Hot Toys quality, but I’d think you could put her next to Sideshow’s awesome 12-inch Joes without her looking out of place. She has a great face sculpt — with a really great smirk — excellent clothes and accessories. Regular Joe fans should really consider taking a good look at her before dismissing the figure out of hand because it’s Rise of Cobra. For $30, it’s a bit of a steal.

Same deal with this. First of all, the packaging is incredibly sweet — the book opens on the left side to go through the McMullen family timeline, on the right side to go through the best of MARS’ weapons-tech, and in the middle to reveal the toys — a Destro ancestor in armor, and then movie Destro as played by Chris Eccleston. Now, the ancestor has a mask that fits over his head, while modern Destro has an alternate masked heads, both of which are  pretty sweet. More importantly, both have incredible sculpting — really, just incredible. Frankly, the 3 ?-inch modern Destro looks just like Chris Eccleston. It’s one of the best sculpts Hasbro has ever done. Seriously. Joe fans who want this thing might have to fight off some Doctor Who-loving customizers at SDCC.

Lest you think that I meant that TR is going to become a Hasbro shill site, I’m only mildly fond of this set. It’s nice, and I believe both the Red Skull and Namor in teeny green trunks are exclusives (well, as is the Human Torch, but only because of a Toro-esque paint job; if there’s something exclusive about the Cap I can’t figure out what it is) but the Marvel Universe figures just don’t have the same level of sculpting as Hasbro’s Joe or Star Wars line. Human Torch fares the best because he doesn’t actually have a face, just some lines. Red Skull looks pretty darn good, but apparently Hasbro used one of the Indiana Jones Nazi figures for his body, and thus he’s pretty small compared to the others. Cap and Namor are just enh. And the packaging isn’t anything to write home about. I really which they’d done some Invaders or ’40s-style art on there. There’s also a black and white Captain America being offered at SDCC; I can’t imagine why anyone would want it, unless they had to own ever Marvel universe figure produced. Frankly, since I get most of my b&w figures as variants when I’m trying to get colored gashapon, my dislike might be because I view b&w figures as a punishment. 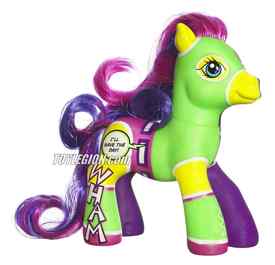 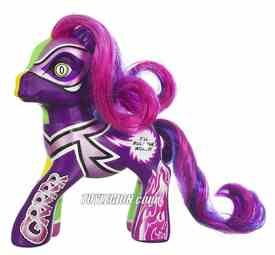 You may be shocked to learn this, but I have a penis. Thus, I’ve never had much of an interest in My Little Ponies. Still, I couldn’t help but notice this exclusive is kind of awesome. One side is a superhero, one is a super villain, complete with sound effects and word balloons painted on her. The supervillain side also looks delightfully insane. Pretty cool, if you ask me. 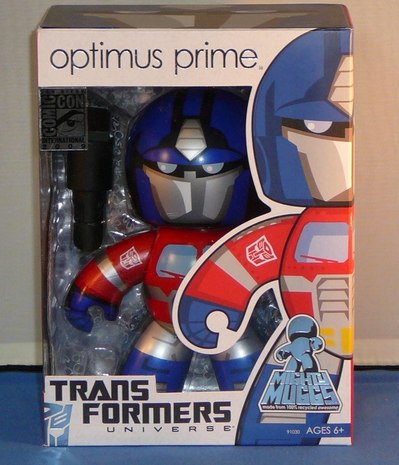 I’m only marginally approving of Mighty Muggs. Frankly, the body is just too darn plain to do much with, in my opinion, so I feel that it only works with your plain human-shaped characters like G.I. Joe and the basic Star Wars humans, or when they add stuff to it, like Galactus’ big head in the Marvel line. The Transformers have such distinctive shapes that turning them into a Mugg loses virtually everything cool about them. Also, this variant is just that it’s metallic. Bleh.

Meanwhile, if I could have hot, sweaty sex with a single toy, it would probably be this. As an adult nerd and toy collector, I’ve only ever wanted to own one Transformer — classic Soundwave. I was aghast when I missed the re-issue that came to Toys R Us a few years ago. But it turns out that was fine, because this SDCC re-issue blows it
out of the water. Soundwave is exactly like you remember him, down to his metal feet! Plus, he comes with four tapes — Ravage, Laserbeak, Buzzsaw and Ratbat, each with their accessories, plus four cassette cases for them. This thing costs $50 at SDCC, which I was absolutely going to pay; it’s just that wonderful. But now I don’t have to. I full accept your jealousy and hate.

Let’s end not on a bang but a whimper — two Star Wars figures you don’t need. The Stormtrooper Commander is just another Stormtrooper paint variant (when I was a kid, all Stormtroopers were white! And we liked it that way! And get off my lawn! *shakes cane angrily*) from The Force Unleashed that I don’t remember seeing, while Luke comes packaged with an X-Wing ladder and a big, shit-eating grin. I honestly think most SW fans would want the Luke figure, just because of the ladder; it’d be kind of funny to see dozens of unwanted smilin’ Lukes on the convention floor.

The only other exclusives Hasbro will have at SDCC are a Wolverine Mighty Mugg and some Littlest Pet Shop thing, so I’m not especially crushed those weren’t in my gift bag. But overall, I’d say that’s a hell of a strong offering — I don’t know that there’s a better toys being offered at SDCC than the Soundwave re-issue (certainly none I have such carnal desire for) and those Rise of Cobra exclusives genuinely surprised me with their awesomeness. Much, much thanks to Hasbro and the PR team for sending me the goodies; I certainly appreciated it, and hopefully it helps some of you guys, too. And stay tuned to Topless Robot for our amazing upcoming feature “Ripcord Rexamined: Why Marlon Wayans Is the Greatest Actor of His Generation.”