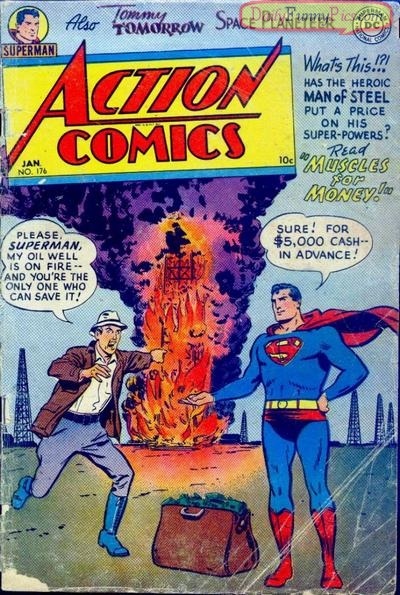 ?And I more or less mean that literally, as a court has ruled that an additional portion of the Superman character and comics should go to
co-creator (more specifically their heirs) Jerry Siegel and out of DC
Comics’ control. I’m sorry to cut and paste another lengthy Variety
article, but I find who owns what part of Superman and his mythos just
fascinating:

This means the Siegels — repped by Marc Toberoff of Toberoff &
Associates — now control depictions of Superman’s origins from the
planet Krypton, his parents Jor-El and Lora, Superman as the infant
Kal-El, the launching of the infant Superman into space by his parents
as Krypton explodes and his landing on Earth in a fiery crash.
…
In 2008, the same court order ruled on summary judgment that the
Siegels had successfully recaptured (as of 1999) Siegel’s copyright in
Action Comics No. 1, giving them rights to the Superman character,
including his costume, his alter-ego as reporter Clark Kent, the feisty
reporter Lois Lane, their jobs at the Daily Planet newspaper working
for a gruff editor, and the love triangle among Clark/Superman and Lois.
…
DC owns other elements like Superman’s ability to fly, the term
kryptonite, the Lex Luthor and Jimmy Olsen characters, Superman’s
powers and expanded origins.

Madness! Now, Variety points out that this is less about the rights
themselves and more about how much money they owe Siegel and Shuster
for tall the Superman media floating around since 1999. But the Siegels and Shusters will also own the entirety of Action Comics #1 come 2013, meaning they’ll be the ones with the right to make Superman movies and shows or whatever. So if Warner wants to make say a Superman movie without Siegel and Shuster’s blessing (or massive payments to them), they’d best begin quickly.

Also, I still don’t know how DC can have a Superman comic in 2013 if the Siegels and Shusters own Action Comics #1 outright; maybe they can’t. I assume that DC/Warner is just trying to stake out as many rights as they can now so that they have to pay as little as possible to “license” Superman come 2013, because they have to to keep Superman at DC — right? Madness, I say. Madness.
Tweet Pin It