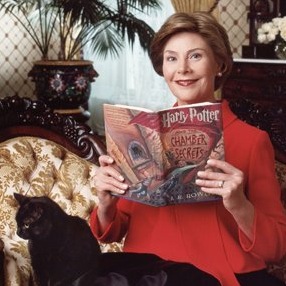 ?I hate when we get into political arguments here on Topless Robot; I have my opinions, certainly, but really, TR is for nerdiness, which is why I’ll happily post a pic of Obama wielding a lightsaber and delete comments complaining about or praising the president’s policies. It’s about the dude wielding a lightsaber, man. That said, I really don’t know how we can avoid talking policies here, when the news is that Bush refused to give J.K. Rowling a Presidential Medal of Freedom since several of hsi officials said the books promoted witchcraft. From the new book Speechless: Tales of a White House Survivor by former Bush speechwriter Matt Latimer:

This was the same sort of narrow thinking that led people in the White
House to actually object to giving the author J.K. Rowling a
presidential medal because the Harry Potter books encouraged withcraft.

Apparently this is on page 201, if anyone doesn’t believe it. Now, I am well aware that there are idiots out there who believe this, and believe that Dungeons & Dragons also promotes the same. But I will never stop being aghast when I discover that these people are working at the highest levels of the government. It makes me wish that witchcraft actually existed, partially so they wouldn’t be such imbeciles, and partially so someone could cast a spell on them so they’d stop being such imbeciles.

And yes, that very much is a picture of former First Lady Laura Bush reading a copy of Chamber of Secrets. Sigh. Thanks to MyNoNos for the tip. (Via Think Progress)