We all have to do things for money. The luckiest of us get to do something we love, the vast majority do things we don’t like or at least don’t mind, and a sad lot do things they hate. And some people, like one character in particular, will do virtually anything for a paycheck, no matter the job. When Star Wars movies weren’t in production, the golden protocol droid remained busy on the big and the small screen, taking odd jobs, doing PSAs, and hawking products the world over; and much like in all six movies, C-3PO was played by the same actor, Anthony Daniels, in every one of these performances, commercials and shills, making them all more legitimate and shameful simultaneously What golden terrors await you in C-3PO’s skeleton closet?

If you have a Saturday morning cartoon, you are going to have a cereal.
This was law in 1984, and even golden men from other planets were not
immune to the needs of marketers.

“We’ll call them C-3POs.” Will we? Did we spend all day coming up with
that one? Anyone can act, but apparently anyone can’t come up with
snappy, apt names. And those aren’t “Os,” they’re “8s”. Taking a job
like this is the last step before a robot has to sleep in his car by
the side of the road. (Don’t pretend you haven’t seen it. Anyone
visiting Hollywood has seen Twiki by the underpass and OG Cylons
hustling their hip hop mix CDs in front of the Amoeba Records. This is
no life for a robot.)

Before George Lucas contracted the men behind the Muppets for The Empire Strikes Back and Return of the Jedi, the Muppets contracted C-3PO in 1979 to translate for R2-D2’s hot street lust on Sesame Street, of all places.

Apparently C-3PO is a comedian. Given that it’s Sesame Street, you
might expect singing or dancing, not critiquing R2-D2’s taste in
chicks. Or maybe you would expect that. Six million forms of
communication aren’t enough to keep a robot employed in matters of
protocol and diplomacy.

It’s not uncommon for celebrities to make some mad phat bank by going
to Japan and doing a few ads. Brad Pitt has done it, so why not Star Wars‘ resident stud muffin, as in this 1996 Mitsubishi commercial?

He’s fluent in Ewokese, but can he drive stick? (More on C-3PO’s stick momentarily.)

7) Doctor (or Someone Who Plays One on TV)

Fearing his status as the most beloved Star Wars
character, C-3PO decided it would be a good idea in 1980 to do a Public Service
Announcement to help kids get what they love the most — shots!

Little known fact: R2-D2 beat up C-3PO after doing a spot requesting
more homework from Mrs. Yablon because she totally forgot to assign any
before the Christmas break. May the Force, long division, and needles
be with you!

This 1982 video — you can tell because the Empire Strikes Back collection has the last series Empire Strikes Back
figures like Hoth Luke and Zuckuss for a grand total of 47 — thus
cementing the nerditry of a generation. Kids can’t resist this kind of
hard pitch! (Could you? Surely not.) It’s insidious, and surprisingly
uncommon in children’s products these days. Who wouldn’t want an AT-AT,
Slave I, or Wampa after seeing this spot? Commies, that’s who. 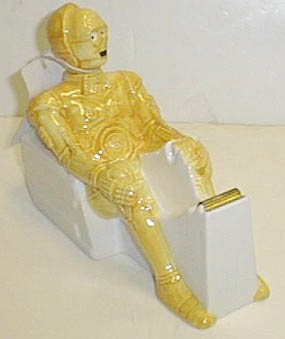 At some point, C-3PO licensed out his good name and good looks to a
variety of companies to make numerous licensed products — like the
cereal and the toys. But did you know that C-3PO also became a product
that encourages you to put something between his legs? It’s true!From
Sigma (who also brought us Landspeeder soap dishes and a super-cool
Snowspeeder tooth brush caddy) comes this oddity. Apparently Han called
him “Goldenrod” for a reason… but this isn’t the only one.

Apparently, C-3PO must have been busted by the Burbank police at some
point because, like so many showbiz greats before him, the golden droid
has been made to do a PSA against smoking.

As you can see, somehow C-3PO has discovered that R2-D2 is smoking.
Presumably to be cool, because let’s face it, R2-D2 is generally
considered to be the cool one. It’s a good thing he’s around to let us
know he doesn’t approve of such things. 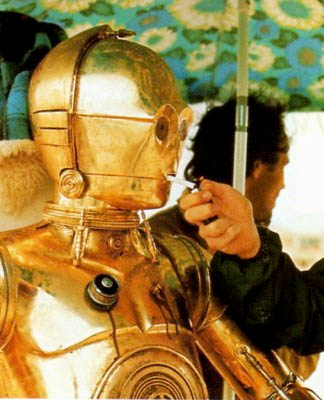 Nobody likes a hypocrite. It’s like the robot has some sort of oral
fixation. Well, at least it’s just cigarettes, surely this won’t turn
into something worse that may manifest itself in some public
documentation sold to children, right? 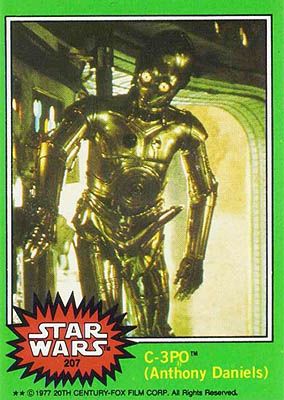 First: this is real. No, you are not seeing things. Topps (best known
for their baseball cards) actually released this bad boy (with his
bigger, badder boy) in the 1970s in wax packs of trading cards with a
stick of bubble gum which is as fresh today as it ever was. This
1977 trading card was actually distributed in large numbers to unsuspecting
kids. Various stories have circulated over the years as to the origin
of the image, from a disgruntled employee with an airbrush to the image
seen here being the actual unaltered image as taken from the negative
provided by Lucasfilm. The corrected card is actually much harder to
find, but let’s face it, if you’re going to buy one of the two versions
you’re going to want C-3PO as Bwana Dik. (Apologies to the Mothers.)

Nothing lasts forever, and eventually C-3PO, star of three of the most
beloved movies of a generation, had to find new work. But what could a
robot do? Surely there had to be some film that could use his talents.
Thankfully, he soon found work, but not before scraping the bottom of
the barrel in this 1999 clunker.

C-3PO, we understand whipping it out for the cameras back in the 1970s — everybody was doing it — but did you have to appear in this?