Menu
Home
>
Comics
>
The Least Super Superman That’s Ever Been

If you’ve been a nerd for at least a decade, then you probably remember that in the late ’90s, Tim Burton was set to direct the Superman movie, Kevin Smith had written the script, and, inexplicably, Nic Cage was going to star. Happily, even Warner Bros. knew this was too insane to let happen, and it eventually was shoved in the basement closet where all of Warner’s DC movie’s go to die. But today, a tes pic was released of Nic Cage in what would have been the Superman suit. This is that pic. 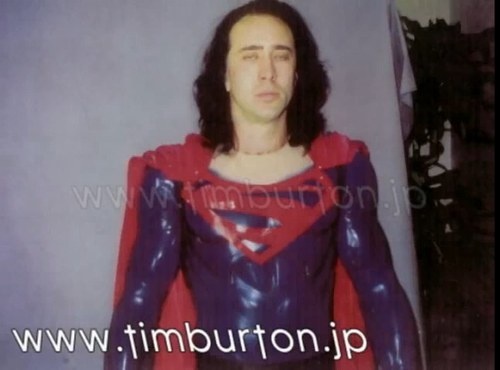 ?
HOLY FUCKING FUCK. This picture is genuinely more terrifying to me than the Pok?mon menstrual pad, and at least as inappropriate. I don’t know whether to laugh, cry, or go knifing people in the street. (VIa io9)