Bruce Campbell. Actor. Author. Director. And perhaps most importantly, a god to nerd-kind. Never before has a celebrity so accepted their B-movie fate and found their way into our nerdy hearts.
His appearances always make us take notice, thanks to his legacy of awesomeness in films like Army of Darkness and TV shows like Burn Notice and The Adventures of Brisco County Jr. But it would be a lie to say that everything Campbell has starred in during his long career has been awesome; as a B-movie star, he’s been in a lot of crap, frankly. However, no matter how low-budget or ridiculous or outright terrible the project, Bruce Campbell always gave it his all — which is one of the many reasons he’s endeared himself to so many nerds. We all know Bruce’s hits, but in order to truly understand Bruce himself, we have know his misses as well. Thus, out of love and admiration, Topless Robot presents the the 10 least essential works of Bruce Campbell.


Tornado! (you have to yell it) was a TV movie meant to capture the excitement from then summer blockbuster Twister, which means Bruce has the unfortunate role of being the TV equivalent of Bill Paxton. Despite having one of the laziest DVD covers ever made, Tornado! does succeed in having superior character and story development than its big screen counterpart. But then again, so do most home movies.

Please don’t get us wrong — Darkman is awesome. It was the first stab at the superhero genre for Bruce’s high school buddy Sam Raimi, which meant that Bruce was guaranteed a part in the film. However, as a Bruce Campbell vehicle, Darkman is sadly lacking. He doesn’t appear until the final seconds of the film, and when he does, he has no lines. Fans of Sam’s brother Ted — all eight of them — fare better with Darkman, as Ted not only gets a speaking role but a truly ridiculous death scene.

Easily the best film on the list, this Coen brothers flick won the Academy Award for Best Picture; however, Bruce only appears on a television soap opera that the hit men are watching. More importantly, the footage is actually from a self-described “horrible” Detroit area show Bruce did as a young man. So while you should still run out and rent this movie if you haven’t seen it, realize that Bruce Campbell may be the only actor alive embarrassed to be in Fargo.

A name-only sequel to the 1995 Tarantino/Rodriguez gore fest, this made-for-video sequel trades on the name Bruce Campbell in hopes poor schlubs (like us) will rent it. Bruce’s cameo comes early and has absolutely nothing to do with the resulting film, which is a low-budget time-waster about vampire bank robbers. Watch the above YouTube clip and save the 99 valuable cents you’d spend renting this.

Sam Raimi’s follow up to Evil Dead also ended up teaching him about creative control when the studios backing the film replaced Campbell as the lead and stuck him in a bit part as Renaldo  the Heel. Despite Bruce’s efforts to chew a little scenery, the overall film is disappointing and only interesting to Campbell completists. 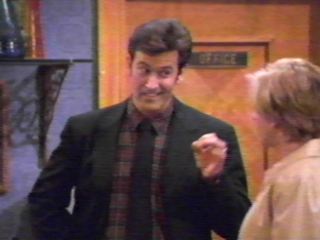 ?
Nobody can blame Bruce for wanting to soak up some of the gravy that is sitcom money. Playing Ellen DeGeneres’ boss and resident homophobe Ed on her self-titled sitcom, Bruce’s character wouldn’t let Ellen babysit his children for fears of her turning them on to the Indigo Girls or some such. Sitcoms are never fun when they get all “very special episode,” and we prefer our Bruce tolerant, thank you very much.

Ah, Bruce’s first big “summer blockbuster” A-list movie… wherein Bruce gets killed in the first five minutes and you’re forced to watch Tim Curry as an annoying gorilla sign language speaker for the remainder. Bruce shows up later in the film as a corpse, which seems to taunt you with the knowledge that Bruce escaped this horribly boring film, but you didn’t. Adding insult to injury, Kenner also stupidly chose to exclude Bruce in their poorly thought out line of Congo action figures, eliminating the only possible cool thing this film could have spawned. Still, the above Youtube clip of Bruce explaining his involvement with Congo shows bad experiences make great anecdotes.

There’s an alien in an airport! It could be anyone! Bruce plays a convict who turns out to be the hero in this hastily made Syfy Channel movie; this plot was done on The Twilight Zone so much that it has Rod Serling’s tire treads on it. The most redeeming thing about this quickie is it kept the Campbell family fed and clothed. Trying to get through an airport in real-life is far scarier than anything in this film.

?
Movie remakes of popular television shows were all the rage in the 1990s, even if most of the population had long forgotten the original series. We can give thanks to horrible movies like McHale’s Navy, which finally put a stake in the heart of that trend by keeping the public away in droves. Bruce avoids all blame in this one as Hollywood had yet to realize that Tom Arnold = box office poison.

Bruce stars as astronaut Ivan, who (after arriving back on Earth in what looks like a flare being shot into a quarry) is just shocked to find that giant termites have enslaved mankind. It is up to him to save the day in this made- for-SyFy mess. Alien Apocalypse actually features CGI creatures that look less convincing than the monster of any random 1970s Tom Baker Doctor Who episode. Bruce tries his best, but he’s got very little to work with here and the film’s pacing is horrendous. Apologists claim that the film is meant to be a comedy, a classic move now known as “The Wiseau,” but the low-budget sci-fi schlock Bruce is mockingly making in the beginning of My Name is Bruce — named Cavealien 2 — would imply otherwise.