We all know we should all be terrified of robots. These mechanical marvels are stronger than us, smarter than us and, if the mounds of Battlestar Galactica slash-fic is true, way better at gay sex than we are. But worst of all… they know it. Pretty much any robot out there could wipe us all out given the right time and tools, (the tools being themselves). “But, surely Asimov’s three laws will save us!,” you say. Yeah, keep telling your self that as their metal fists peek through your front door. But since they may be temporarily programmed against pounding in our already squishy meat-bodies, they have to show their homicidal rage the only way they can – through being condescending robo-jerks. Here are the 8 worst of the bunch. 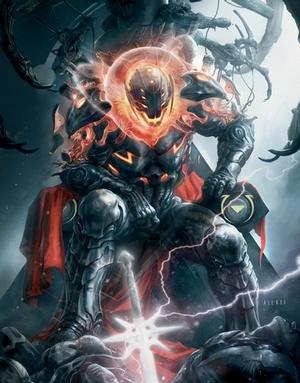 ?
Constant Avengers foe Ultron is smug in the way just about every Marvel villain is smug – he likes being evil in ALL CAPS WITH LOTS OF EXCLAMATION POINTS!!!!! But how smug is he reallty? Well, let’s start with the fact that he named himself Ultron, and later adopted the even more redundant “Ultimate Ultron.” That’s even more smug than calling yourself Mr. Fantastic.

Okay, there will be some of you that argue that Star Trek Voyager’s Doctor isn’t a robot as he’s made of light and force fields – but there’s no arguing that he’s something we created that thinks we “solids” are inferior jerks. Sure he mellowed in the later seasons from being a real superior dick to being a superior dick who sings opera, but in the last season, he still wrote a novel about how all the rest of the Voyager crewmembers were moustache-wearing dicks, while he was the hero. Yep, he’s a robot who writes fan fiction in which he’s inserted himself, which might be the greatest robot menace of all.

You might not think about The Hitchhiker Guide‘s perennially gloomy Marvin being on this list, considering he is the embodiment of self-deprecation, but remember what he drones on about… He’s fity thousand times smarter than a human and has a “head the size of a planet.” And he’s got a point – it’s only his crippling depression that keeps him from being a threat. If anyone invents a prozac-program, Marvin could rule us all.

For a robot, V.I.N.C.E.N.T.’s pretty nice to humans, but his superiority really comes out in his constant, nagging proverbs and advice doled out constantly through The Black Hole – he’s essentially a fat, floating Bartlett’s Quotations. Also, V.I.N.C.E.N.T. considers his model of robot better than everything else, even though it includes Old B.O.B., the only robot programmed to sound like a rodeo clown. Yep, he’s a robot racist that “hates the company of robots” and has no compunction about shooting them or carving out their insides with his bladed metal penis. Actually, he should be smug about that.

The heartless, soulless heart and soul of Futurama, Bender, has no doubts about how awesome he is. And ike all great men, he is a mass of contradictions: a hater of robot/human love, yet he cares deeply for the head of Lucy Liu he carts around in his stomach. One moment proud of his “shiny, metal ass,” yet later declaring that bodies are for “hookers and fat people.” And deeply loving of his roommate Fry, yet secretly dreaming to kill all humans. Maybe when the new season starts, he’ll finally get his wish.

?
It’s an interesting philosophical question — if a robot is programmed to duplicate a jerk, is that robot itself a jerk? Is there such a thing as a “dick meme” that can infect a ‘bot – particularly one made in the image of Doctor Victor Von Doom, a man so arrogant that he’s still trying to kill his college roommate for ruining his dorm life? And here he succeeded, as he’s made robots that felt they could replace him – and if you’re more smug than a man who spends years in his basement making duplicates of himself, that’s pretty dang smug.

The evil twin of Star Trek: The Next Generation‘s Data (and not to confused with Data’s retarded twin, B-4), Lore excelled at killing human at an early age, teaming up with a giant crystalline snowflake to kill everyone at his space colony (although, what he had to offer a giant crystal is anyone’s guess). Later, preaching the supremity of being a machine, he led a cult of borgs who wanted to remove their organic parts. So, he not only got to kill a bunch of human, but convince some cyborgs to let him cut out their brains. Robot Jesus, he must’ve been persuasive.

When you’re looking for a smug mechanical asshole, one name comes above all – the screeching scene-stealing Starscream from Transformers. He doesn’t discriminate about who he feels superior to – he’s better than everyone: human, robot or giant humanoid robot head. After all, how overly self-confident do you have to be to brag about how you’re a better leader when your leader’s standing next to you… and that leader’s also a gun?