You’re having people over for a night of dungeon running, or maybe you are having no people over and playing your friends online with some Left 4 Dead. Either way, you are going to need to eat something during this lengthy gaming session, preferably something you can grasp without one hand without looking. More importantly, it must be something that has almost no preparation time, thereby maximizing your game time. Most importantly, it must be horrible for you; full of calories and fats and cholesterol and sugars, with as little actual nutritional value as possible. Why that last part? We’re not 100% sure, but it’s certainly a rule that gamers aren’t going to eat salads during their epic tabletop or online adventures. Here now are a few of the worst things nutritionally — but the best things emotionally — to eat while gaming. 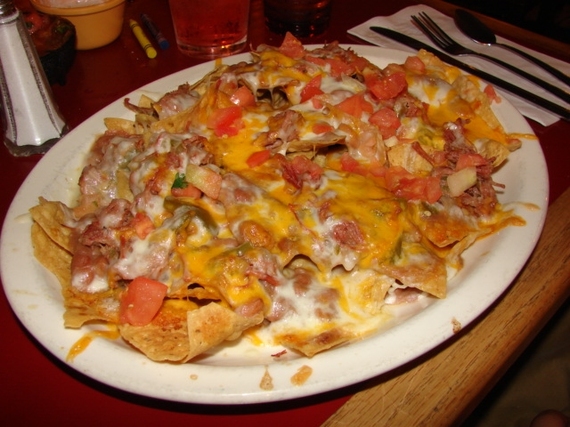 ?
This delicious snack has the special property of being variably unhealthy. Plain nachos and cheese are not that bad health-wise, but you can easily ramp that up, with sour cream, olives, tomatoes sausage chunks, whole slices of pizza, until what you are left with is food goo, not unlike what you might feed to domestic livestock. Perfect for when you might already be in a “farm” mindset for a game of Settlers of Catan.

?
You need to bring something to a D&D campaign, and you want something sweet, you usually can’t go wrong with Oreos. You can even go and get some non standard mint, strawberry or Double-Stuf Oreos if you want to shake it up, but if you usually slap down a plastic wrapped plastic tray of Oreos on a table, your friends will eat them. Also, they contain 2,400 calories per container so, you know, eating one of these by one’s lonesome could be considered “heroic,” though going into a diabetic coma over Xbox Live could be one of the worst ways to die as you not only see “The Light” but hear someone shouting “Hey, this fag is sucking dick all over the place!” 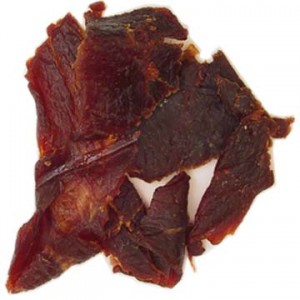 ?
Why have we not yet developed a way to make this snack cheaper? It is delicious pieces of dried meat, yet always costs you an arm and a leg to purchase. They also contain about 600mg of sodium on average, so naturally you may find your organs turning into jerky themselves if you eat enough of it. If further to demonstrate the unhealthiness of these foods, think of a gas station. Are you thinking of jerky? Jerky is synonymous with gasoline. Jerky is also great to use on a 3-D gaming map for those characters unfortunate enough to be killed outright. As a DM all you need to do is replace the character’s statue with a piece of dried snackness and say “See that? Dwarf jerky. Anyone want to revive the peppered teriyaki goodness?”

?
A cousin to jerky, you don’t necessarily seek out the Slim Jim, rather it subliminally calls to you as you are purchasing a soda on your way to a gaming session. Get in the car, and suddenly there’s a Slim Jim there without you realizing it. It also one of the few things that you know can’t be healthy for you without even looking at ingredients on the package, but if you did look, you would see “Mechanically Separated Chicken” as an ingredient. Yes. It sounds like it might be chicken torn apart by a robot with claws for hands, but in reality is just chicken meat turned into a paste-like substance, which looks like this: 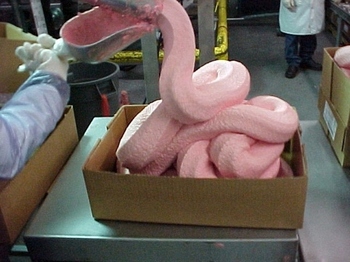 ?
Of note: Slim Jims have been out of production since a large explosion at the Slim Jim factory since June 2009, and perhaps only now are returning to acceptable distribution levels, so there are likely to be still plenty on the shelves. 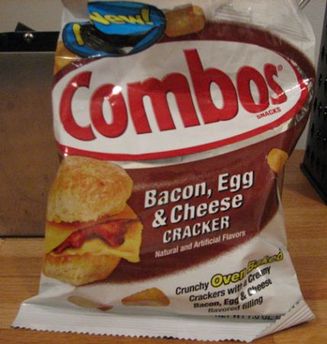 ?
Essentially cooked circular dough with stuff inside, these beauties can run you about 140 calories per serving with 60 of that being fat calories. In a small 1 oz. bag, you can get 7 servings, so if you eat a whole bag, that’s 980 calories, with 420 calories of that being fat. They also do sort of taste a lot like whatever the flavor is, from pepperoni pizza to chips and jalapeno pepper, thanks to whatever strange supersience in flavoring they utilize from labs buried deep in the earth. The Combos all have essentially the same shape, which is not unlike a Snausage, the snack for dogs, which isn’t necessarily a bad thing. If they marketed “Snausages for Humans” you can bet there would a lot of Combos eaters who would crack a bag of those in a second, even if they just changed the packaging and not the dog treat itself. 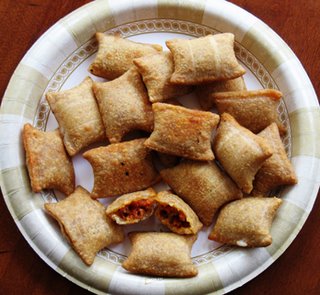 ?
These snack-sized pizzas in an edible container that are less healthy than a regular slice of pizza are truly the pinnacle of human scientific endeavor. No, seriously, you get a box, you cook about forty of them, sit down and you are set. Maybe with a little ranch dressing on the side or beer to dip these in and you have yourself a good hearty meal. Or, heck, cook several boxes, make a giant mountain of pizza rolls, place a few mountain climbers, a flag at the top, and have your friends over to eat the Mount Everest of snacks! 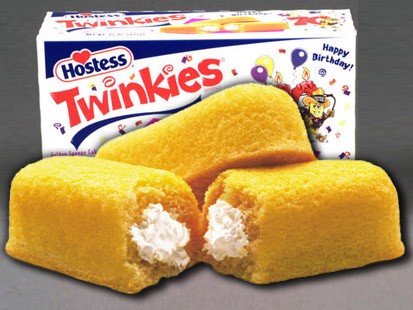 ?
I don’t even need to describe Twinkies. You know what these are, cake, with filling and a creepy-long shelf life of 25 days (yes, they do expire) which is because they aren’t made with dairy products. That’s right, they are a cake without any dairy in them, which should tell you that something unholy is made up of their molecular compounds. Doesn’t matter, though does it? Take a box of one of these to a gaming night, and you are a hero. Or screw that, keep the box for yourself, load up some Modern Warfare, and cram Twinkies in your mouth as you shoot – it’s not like you’re going to get some interesting conversation over Xbox Live anyway. 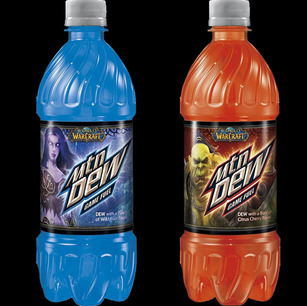 ?
There is a reason you can find Halo and World of Warcraft-themed Mountain Dew drinks – it’s like the ichors of the Gaming Gods! Yeah, it’s got a lot of sugar, which is bad, and the usual carbonic acid, which can eat through your insides, but more importantly it contains Brominated Vegetable Oil. Brominated Vegetable Oil, or BVO is banned in 100 countries. Oh, also in a pure liquid or vapor form, it’s deadly. Put it in your Mountain Dew or a number of other citrusy soda drinks and you get that distinctive uniform color to it. It also has it side effects such as memory loss, violent tendencies, acute irritability, tremors, confusion, loss of peripheral vision, slurred speech, stupor, erratic reflexes, and so on and so forth of awful. You do have to drink about 353 12-ounce cans of soda per day for 42 days to have any kind of detectible chemical buildup, which some gamers may call “cutting back.” 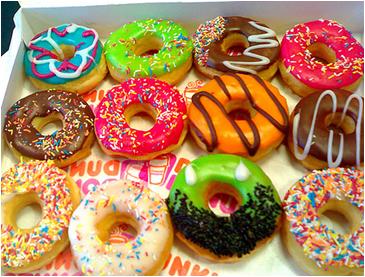 ?
Who does not like a donut? It’s about the worst thing you could eat. You may think that because it has dough in it that perhaps you are getting some nutrition, but you aren’t thinking. A donut, whether it be cakey or Krispy, has about no nutritional value whatsoever. It’s got nothing but fat, sugar, and carbohydrates in portions so large it may as well be “The Sam’s Club of Unhealthy.” However, like cigarettes, it may be the unhealthyness that draws us to it. Also, it is one of the few foods you can buy a box of, bring it to a friend’s house and only your most picky of bitch friends will not find something they like. 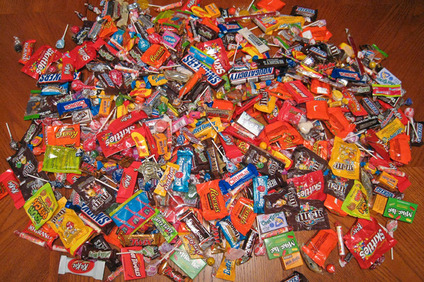 ?
One advantage of being old enough to buy candy is that you can buy candy any time you want. This being America, you can get bags of easy-to-consume candy in enormous sizes. Never mind your insulin, you’ve got a giant plastic bowl to fill with Skittles, Reese’s Pieces, M&Ms (all varities), Jolly Ranchers, Gummi Bears, Mike and Ikes, Reese’s Peanut Butter Cups, King Size Snickers Bars, and sugar cubes covered in powdered sugar. Go ahead! Go wild! It’s not like with your sedentary lifestyle you’re going to start losing weight anytime soon, unless you are using the Wii, in which case, you’re not really gaming.