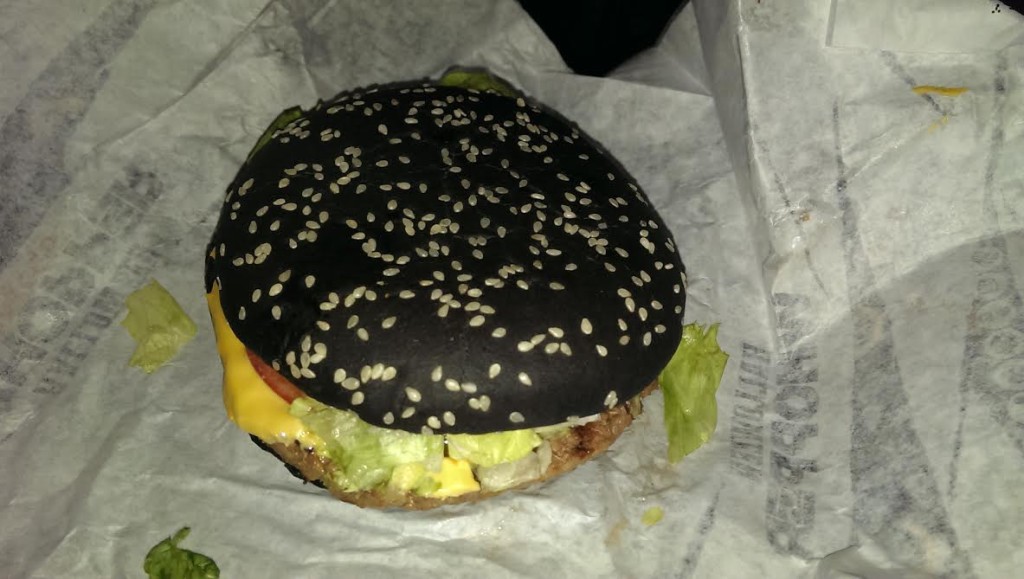 Halloween fast food isn’t usually a thing, largely because when it comes to what people eat, they tend to prefer plausible deniability to something that actively scares them. That, and “pumpkin spice” isn’t in high demand as a burger flavor, yet. (It’ll happen.)

But this year, Burger King seems to be adopting its ’90s era slogan “Sometimes ya gotta break the rules.” And while I wish they were doing it as radically as their Japanese counterparts, who make burgers and cheese black by using squid ink, this is a start. As my wife said, “It looks like the bun went out into the desert and died.”

Burger King have been lousy second-raters for some time, but I didn’t realize just how much until I went looking for this burger. At my reliable neighborhood outpost, they were closed for remodeling. At the next one I GPS’ed, there was a bank instead…with a drive-thru window and familiar architecture design. When I went to the GPS again, it told me there was one 2 miles away – and then it sent me on to the congested freeway for 30 minutes. Yes, if you noticed an unusual time gap in posting yesterday, that’s what that was. My GPS being a prick.

Nonetheless, I made it home with a bag full of black buns. The darkness is supposedly the result of A1 sauce baked into the bun – technically, this is the H-A1-Loween Whopper – but if you taste the bread on its own, I defy you to taste all but the mildest sauciness. But there are other perks – the mixing of the A1 steak sauce with Whopper-standard mayo makes for a creamier condiment than one might expect, which is complemented nicely by runny tomatoes and the briny pickles. And since the black bun is not absorbent in the least, expect the aforementioned combo to drip all over your lap. Good thing I was in shorts.

I should note also that this burger is huge. The meat may be thin – hell, it looks like a meaty Oreo… 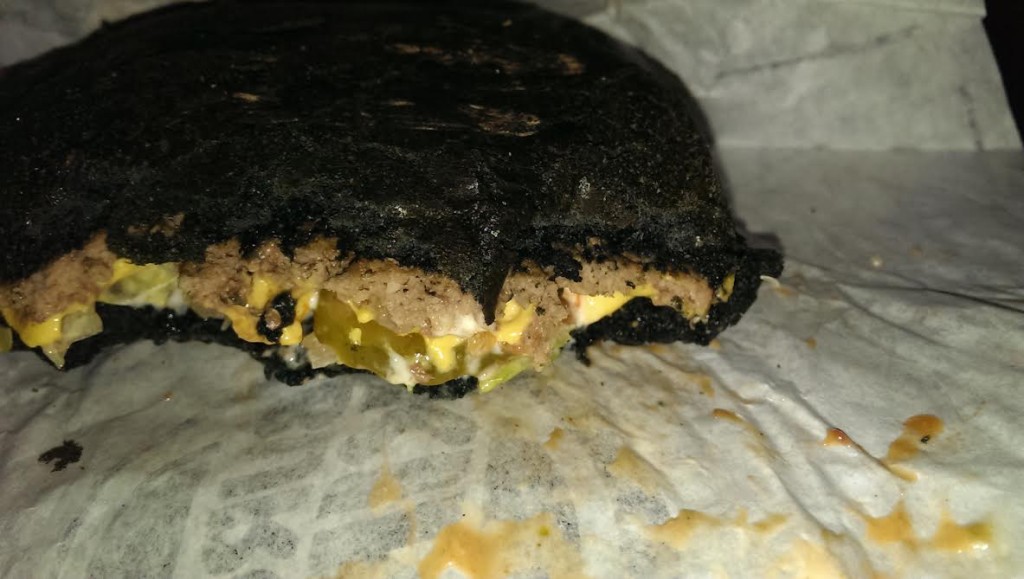 …but it is enough to satisfy, if this is what you like.

I feel like the Halloween theme could have gone stronger, though – the “Zesty sauce” for onion rings is bright orange, so why not work it in? Failing that, just be a real cheap-ass and call ketchup “blood sauce.” There are so many ways to augment this that nobody considered. I feel like they just said, “Americans are weenies, so let’s just push their limits with a color change.” Did we pass? Dammit, we had better pass. Don’t let me down. Next year, I want squid-flavored cheese with pumpkin mayo and “ghost” peppers. Is that so much to ask, creepy King mascot who ought to understand seasonal scares? Is it?

Jeebus, it shouldn’t be. But then, you recently tried to intimidate me with “fiery” chicken fries that were anything but, and distract me further with “chicken fry” sauce that’s just barbecue mixed with mustard, so I don’t know if I can trust you any more.

Fattening up emo goths is a worthwhile endeavor, though. So I will support you…FOR NOW. Meanwhile, bring a napkin to this burger. You’ll need it.