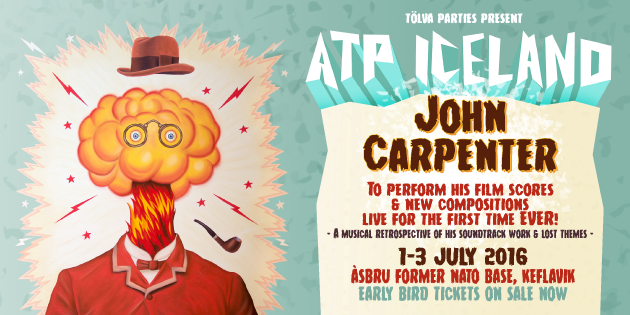 Talk about your mixed blessings. It’s great to see the beloved director get credit as a serious musician, but…ICELAND? Seems appropriately weird, I suppose.

John Carpenter will be performing a musical retrospective of his work, his first solo record of non-soundtrack music Lost Themes, plus brand new compositions. The Horror Master will also be joined on stage by both his son Cody Carpenter, and his godson Daniel Davies (both of whom co-recorded Lost Themes), in addition to a full live band and spectacular stage production.

“We are incredibly honoured to present the first ever show by this legendary film-maker and composer. Having had the opportunity to present the maestro Ennio Morricone twice in recent years, it has been a burning ambition of ours to also present John Carpenter, who is both a pioneer and a huge influence on us and so many great musicians and film-makers that we work with. You’d be fucking crazy to miss this.” ATP’s Barry Hogan

If you want a reminder of how great he is and how YOU DON’T GET TO GO, the ATP festival has made a little trailer. Maybe Bjork will let us all know how it went.