We are now done with 2 weeks of Addams Family: The Musical. Shameless plug!!!!!!!!!!. We have only 3 more weeks left. Last weekends audiences were fab. Lots of laughs and claps. We sold out ALL shows!!!. The theater even had to add a few extra seats. As I can I have added a few more pics from the show for this week . Enjoy.

Hope you all liked the soup recipe from last week. As I think them up I will provide the details. I only have myself to experiment with now. John was such a great guinea pig. Of course he was easy – he said once my food was way better then the stuff he got in the field from the Marine Corp. Not sure if that was a compliment or not? MMMMM.

Well, group, not a heck of a lot of questions this week (the 2 from Luke don’t really count) [Like Hell! – LYT] . We did have a debate on the posts. Hopefully now the site was tweaked this week my article will be one that stays on the front page a bit longer. It seems to disappear faster then it used to so I don’t know if people are not finding it. I need feedback to keep going – or we can just have more cat pictures and no text if you like.

Sorry its been a while, Ms. Boyd. Haven’t had a head-scratcher for a while. smile emoticon

Anyway, I think I have a good question this week. My wife and I have been traveling the world the last few years. We honeymooned in Europe (a river cruise on the Rhine), went out to Vegas for our first anniversary, taken two cruises down to the Bahamas and vacationed in Disney World this past September.

Since neither of us have ever been to Mexico, we were thinking a resort would be nice. I know you’ve raved about Melia in Puerto Vallarta in the past. Is it a good destination for the Fall? Also, is there a lot of stuff to do not only around the resort but in the surrounding areas? Prices seem very reasonable, so I’m definitely interested. smile emoticon

Wow, you have been busy. It is so great to travel. We are going to Melia again in November. This time we are taking Luke and Julia for a few days. The Melia is in the Marina district of PV, so you are in walking distance to shops and restaurants in the area. You don’t just have to stay at the hotel. There is a good tour company who has a desk in the lobby. You can take adventure tours if you like zip lining, hiking etc. There is a winery tour, old town tour, adventure with dolphins, a pirate ship and an Aztec dinner/show. There are water sports and para-sailing over the ocean. Yep, you can keep busy or just lay around – there are even couple massages in a cabana overlooking the beach/ocean. I have never stayed anywhere but the Melia, but all of the chains are in the area and there are also houses you can rent if you don’t want to be in a hotel. Speaking English is not a problem. Money exchange is a bit better at the airport then a hotel. November weather is nice, but we have also been in March and June. June we got some rain, but mostly at night when we were in bed anyway.

Melia is a family resort, but I have never seen kids get out of line. Pool is big so I have never felt crowed or not able to swim. They do not have a spa. The nightly shows are very good and entertaining. I have seen both good and bad reviews on Tripadvisor about the place; sure, it is not 5 star or the Ritz, but it is clean, food is good and plentiful and the staff is very nice. It is a great place to go and relax. I’m sure there are fancier places in the area, but so far have not been tempted to try another hotel. Hope you enjoy if you go.

How do you feel about the updated cartoons we are getting? We’ve got Wabbit, which basically loses everyone except Bugs and Yosemite, and has terrible animation. Now we are apparently getting a new Scooby Doo (Be Cool Scooby Doo) with equally terrible animation and Daphne with hand puppets for some reason.

I really don’t know why we need to update everything. Especially if the quality of the animation is not equal or better. I love the classics and don’t generally watch the new revised versions.

Do you think an argument on Facebook has ever changed anyone’s mind?

No we generally just get into a pissing match which this one sort of turned out to be. Lots of comments but no questions for me this week. Well at least I had comments posted. I guess that keeps my work going in a back handed way – right?

QUESTION: If I went to ESPN.com and said “Hi, I’m the Bad Sports Fan – I don’t care about football, baseball and basketball. How can I get you to post more about archery?” what do you suppose the response would be?

It would most likely be the blank stare. Oh, here is one that will get me in trouble: I hate the entire network weekend programming being sports, sports, sports. Gosh every channel I get with my bunny ears is football this, baseball that, golf, tennis, auto racing. All darn weekend. Thank heavens I have Netflix where I can get all of the food shows I wish to watch.

QUESTION!!! is it Cousin Itt or Cousin IT? I would think all that hair would make IT work difficult, but I’ve seen worse. Certainly the character is no weirder than most of the people that work in the IT field, and every family has that one person they turn to for IT advice.

Well it is IT in the script. Our Cuz is a very nice girl who does very well managing all of the hair that is put on her during the show. She can’t even see thru IT. The outfit is several wigs put together and she has to count the number of steps she takes on the stage so as not to fall off. Fingers crossed so far so good – no tumbles yet. I have attached a photo of IT sitting in the green room – she is so cute. 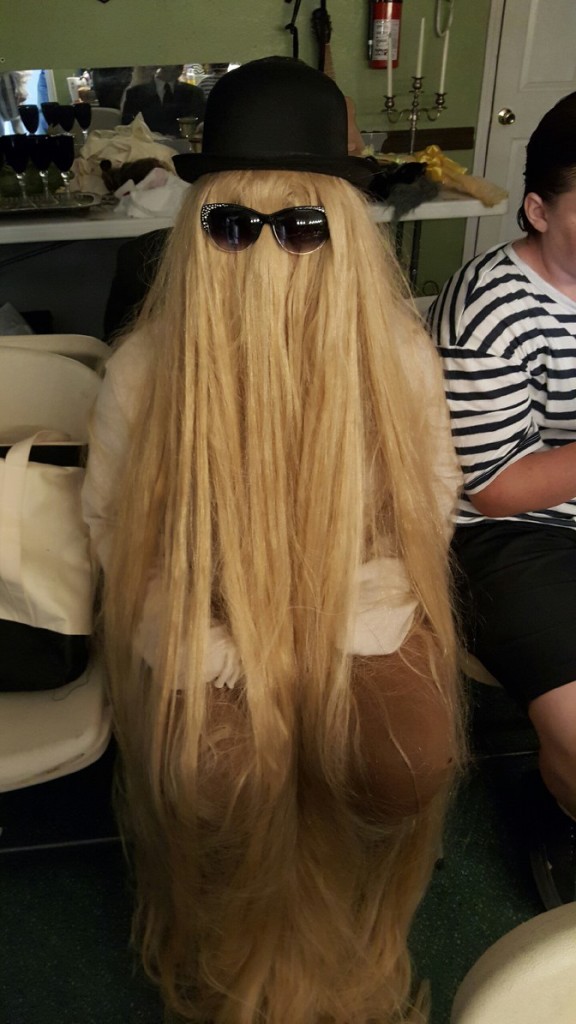 Well, I passed the county driving course, I am now allowed to drive the county cars. These would be cars with just the county logo and or the citizen patrol vehicles which have the Sheriff decal on them. A patrol car could be driven if I were, say, taking it to the shop for repair or something, but then you have to place an out of service tag in the rear windows. There were four different driving tests and I passed them all the first run-thru. The trick is to do it all very slowly,; if you add any speed the control is not as good. Lucky it was not a timed test.

We made it to Columbus Day – not sure why we have this one anymore and almost everything in our area was open except the bank and schools. Mostly now it is just a reason for a sale and/or a day off. Next on to Halloween.

Hope you like all of this weeks pics. As always be good to each other this next week. Please send questions. Huggs to you all.

Feel free to ask more questions on all worldly and otherworldly matters  below, or email directly to boydappraisal at yahoo. Nothing is too important, or too trivial.