Project Warlock, the debut from Buckshot Software and brainchild of 19-year-old developer Jakub Cislo, is a frantic, bloody, retro-styled first person shooter. In my humble opinion, it’s a real treat. Prefer to watch? Check out our two-tone take by clicking the image above, or visit 2 Headed Hero on YouTube! 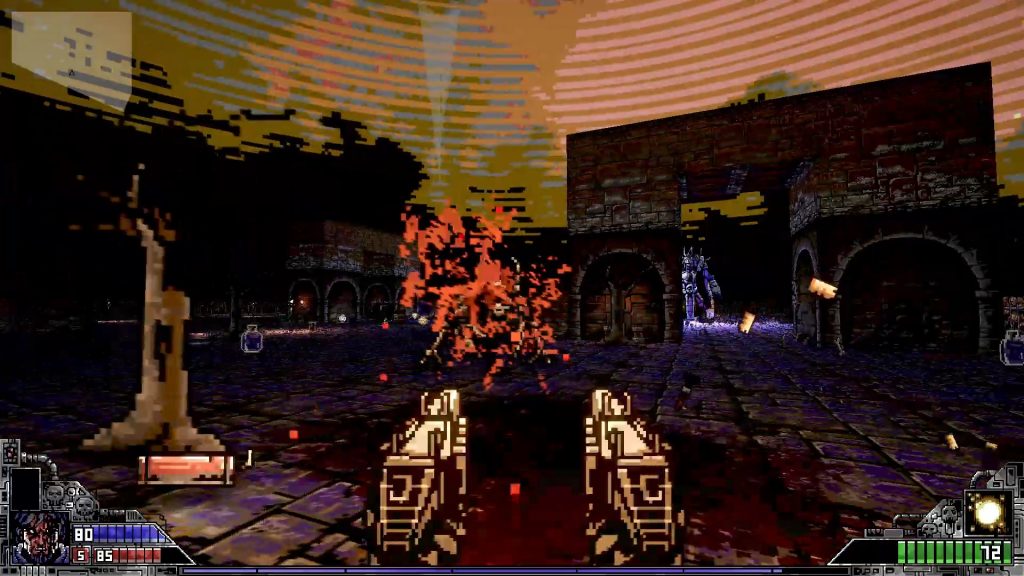 On the surface, this game is a modern day callback to the corridor shooters of the 90s – filled with retro trappings, chunky pixels, and rivers of gore.

Today on Backlog Quest, we blast our way through Project Warlock – a frantic, fast-paced first person shooter, and the debut release from Buckshot Games. Beneath the surface, it’s got a lot of the same guts that made classics like Doom, Quake, and Duke Nukem 3D household names. Some readers out there will probably want to snap it up based on this description alone. Project Warlock was recently released on GOG.com as a limited time exclusive. The game is also rumored to be heading for the Steam platform soon.

A Warlock’s Work Is Never Done

Sticking players firmly behind the sorcerer staff of a nameless time-traveling magician, Project Warlock wastes no time. Players are attacked from the get-go almost as soon as they punch New Game. The challenge? To guide the Warlock through 60 levels of hectic, bloody mayhem until finally planting his boomstick firmly up the backside of the Lord of Hell himself. 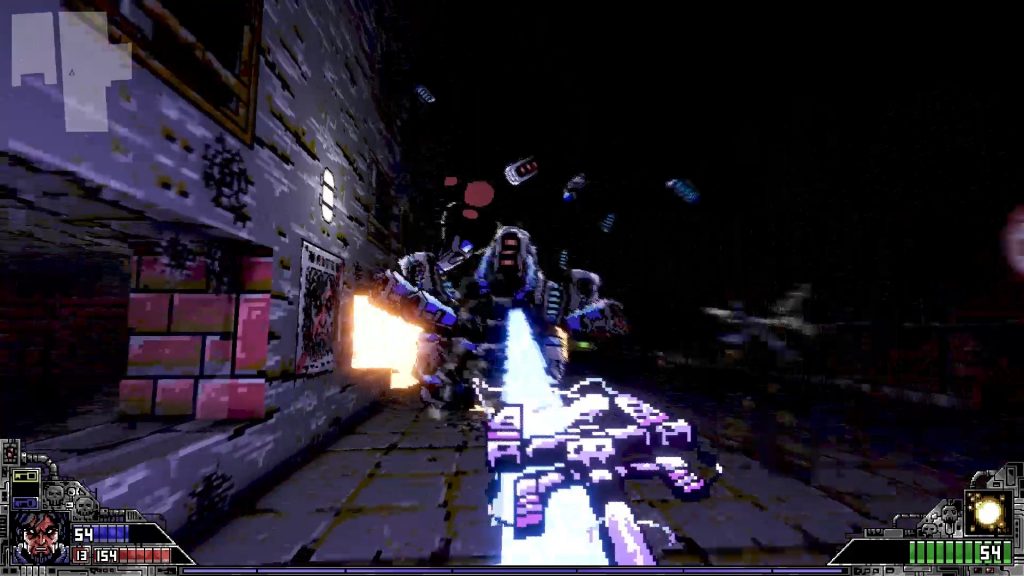 …and you sure are going to meet a lot of unfriendly characters along the way.

The pixels are big, the action is bloody, the monsters are plentiful, and the explosions are huge.
If this all sounds like standard 90’s retro shooter fare, you’d be right, but Project Warlock doesn’t stop there. Really, it doesn’t even slow down. The game throws several modern-day mechanics into the mix. An experience system, character builds, and weapon upgrades all round out the gameplay.

Mashing Monsters Throughout Time and Space 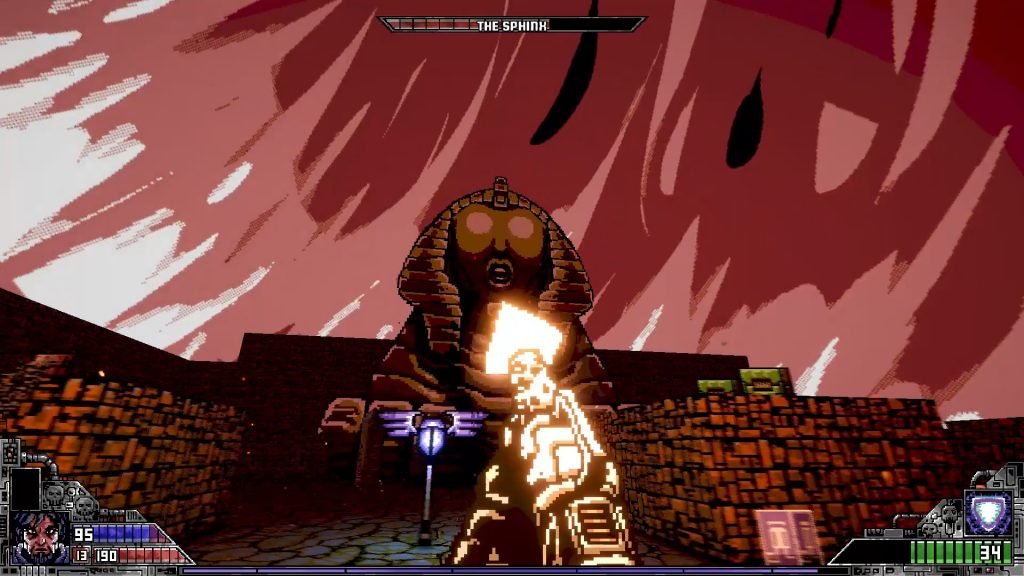 There’s a huge variety of environments in Project Warlock. Each of the five episodes has its own theme, complete with different pickup graphics and enemies. (Plus, there’s a part where you shoot a big statue with a shotgun.)It’s up to your time-traveling Warlock to blaze a path through five different historical periods on his trip to Hell. Ramparts and castles in the Medieval episode give way to claustrophobic ice caves in the Antarctic, and trap-filled tombs in Egypt. The levels largely lack verticality, having much more in common with 1992’s Wolfenstein 3d. This becomes most apparent in the Egypt episode, where claustrophobic hallways reign. 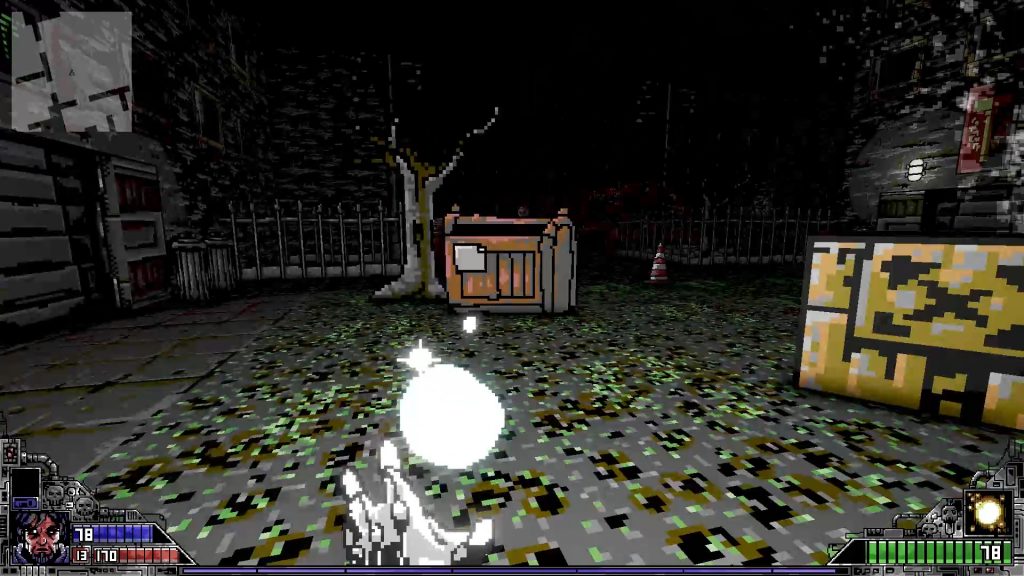 The Industrial zones that follow do much more to open up the maps by including huge warehouses and multi-level buildings.

Project Warlock’s campaign includes five bossfights that serve as episodic climaxes. Each battle takes place in large open arenas. The bosses are enormous, have multiple stages, and are joined by hordes of minions. Each boss battle was a blast, although they were a bit of a difficulty spike. Boss fights probably caused most of my deaths throughout the campaign.

On the default difficulty, veteran shooter fans should expect a fair challenge. There’s no mid-level save system, and careless moves can end the Warlock in mere moments. Some tougher enemies have to be put down several times, rising back from the grave as battle-damaged versions of themselves – a really clever touch. Dying sends the player to the level start with health refilled. Lives are limited – but plentiful.

Here’s what it looks like when you bring a staff to a… uh, staff fight.

Bumping up to the highest difficulty setting turns Project Warlock into a challenge for only the most masochistic god-tier shooter fans. Enemy damage increases, and a single death sends the Warlock back to the beginning of the entire game.

Graphically, Project Warlock attempts to channel nostalgia – and largely succeeds. The game wrestles with pixel-art limitations similar to its inspirations, but applies a punchier graphic art style and modern pixel techniques to achieve a standout look all its own. It also adds modern lighting and shader effects, even turning them into an interesting addition to the gunplay. The player is forced to juggle between their shotgun and their lonely source of light on the fly.

There’s a variety of graphics options to add different retro shaders, enhancing visuals as the player sees fit. There’s even a couple monochrome settings for those that really want to feel like they’re in a time warp.

Level designs in Project Warlock consist mainly of tightly contained switch and key hunts. Over the entire 60 level stretch, I only found myself running around lost a handful of times. This was mainly due to missing a path or secret inside one of the game’s overly dark hallways, which brings me to a minor complaint: The game is often pitch-black, making the light spell somewhat of a necessity. Don’t get me wrong – I’m all for dark atmospheres in games, but if I can’t see even a couple feet in front of me without using a spell, it’s an issue. Fortunately, the darkness level was already addressed in a recent patch and this significantly mitigates the problem.

It would be a huge oversight not to talk about the soundtrack. Each one of the 60 levels has its own theme, and most of the tracks do diligent work in amping you up for the slaughter ahead. The music puts you through a gauntlet of synth-driven metal, chip tune themes, and industrial ambiance. It’s pretty top notch in both quality and quantity, and comes as a free separate download from GOG along with the purchase of the game.

The sound effects generally add a lot to Project Warlock’s atmosphere. Weapons are beefy, and spells pulse with powerful bass tones. Still, a few sounds (such as minigun fire, and some of the monster yells) stuck out as unbalanced, overdriven, or amateurish. These minor transgressions were only small marks on an otherwise effective and nostalgic soundscape.

Project Warlock’s take on the BFG makes chunky stew out of the biggest hell-beasts.

Give Me The Guns

No shooter is complete without a heaping helping of firearms, and Project Warlock delivers more than its fair share. The arsenal is simply enormous, and even starting weapons like the lowly pistol are highly effective and satisfying to use. Each weapon can only be upgraded into one of two choices, and these same tokens are also used to purchase spells, so some sacrifices… must be made. Not everything can be obtained in a single run through the five episodes, so this gives Project Warlock some replay value right off the bat.

Guns don’t matter if the shooting isn’t good. Fortunately, Project Warlock has some of the most satisfying gunplay this side of the millenium. The game places as few obstacles as possible between the player and the purest sense of twitch shooting.

You won’t find any aiming down sights or reloading mechanics here. (By default, there’s not even a crosshair.) You will find a satisfying sense of feedback and impact when buckshot slaps one of the game’s many hellish horrors. Each piece of the arsenal operates differently and has its own application in the field. 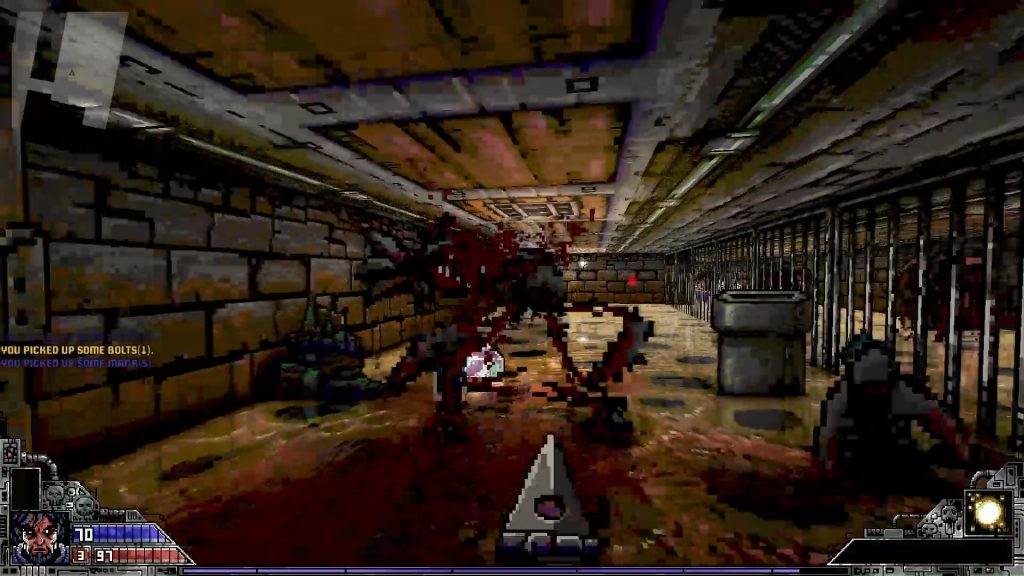 Even melee weapons can be pretty lethal. Some neat water reflections and lighting (pictured above) help bring Project Warlock a step forward.

A Symphony of Violence That Hits My Favorite Notes

Project Warlock hits all the right notes for a fan of old-school shooters like myself. I found it extremely compelling, to the point where I finished the entire campaign in about seven or eight hours.

Keeping with the theme, I chose to go full Warlock for the campaign. My simple staff became a fearsome lightning rod, capable of blowtorching through the toughest creatures in seconds. Thor himself had nothing on my Warlock once I unlocked the street sweeping power of the Stormlord spell. The pure visceral feel of the weapons going off are some of the best in any twitch shooter I’ve recently played. Despite a few minor complaints, Project Warlock is a bloody treat. Shooter fans should drop whatever they’re doing and play it. RIGHT. NOW.