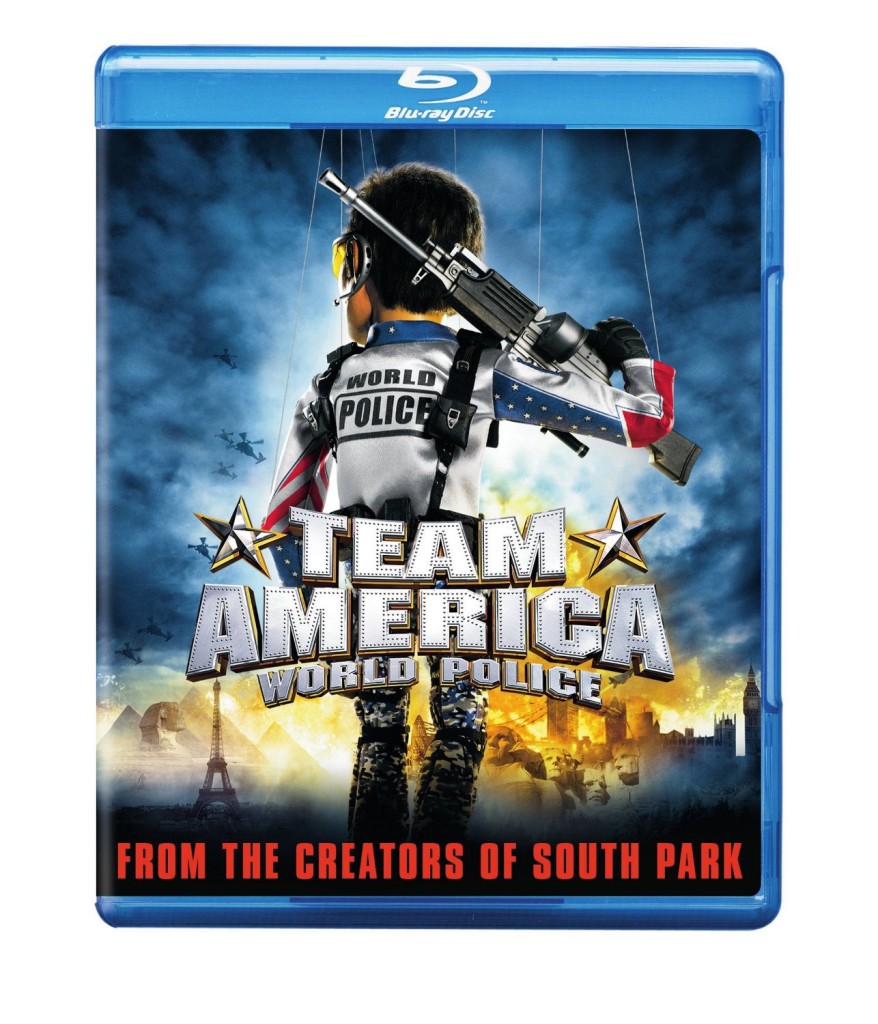 Team America coming to Blu-ray ought to be a good thing. On the heels of The Interview and the Sony hacking, it was initially the go-to fuck you movie that theaters like Alamo Drafthouse were going to show instead for free, until Paramount put the kibosh on it and wouldn’t let the prints be rented. With North Korea newly threatening, now would have been the perfect time to re-interview Trey Parker and Matt Stone, and maybe even get Seth Rogen and James Franco involved. Instead, we get…nothing.

Not only does the new Team America Blu-ray have none of the previous extras – nor any extras at all – it’s also the R-rated cut only. Now, I don’t think the unrated cut is anything special – it adds defecation to the sex scene, but in a way that requires awkwardly re-editing the music to extend the scene, and that’s pretty much it. But the consumer should have the choice, especially since it was the default DVD option.

But if nobody buys this, of course Paramount will say, “hey, there’s no money in this, so screw it.” If you want the movie at all on Blu, you’ll probably have to buy this version, then MAYBE see a more fully loaded edition if sales merit it.

For the record, I think the movie’s brilliant. Both lefties and righties believe it’s for them when in fact it’s skewering both, and it has what I consider the mark of a truly great satire – it spoofs things you didn’t even consciously know were cliches (“Why can’t they ever do this the easy way?”). At least it’s only $8.99.

San Andreas – Dwayne Johnson is the only Rock that doesn’t fall and crush somebody during a hugely implausible chain of super-earthquakes, that conveniently pace themselves to properly pad a movie’s running time. Meanwhile, Alexandria Daddario attempts to survive a collapsing San Francisco while frequently clad in a wet T-shirt, and Paul Giamatti preaches doom and gloom from under a desk. If those things appeal to you, this is mindless movie heaven. The disc includes deleted scenes, a gag reel and a director commentary by Brad Peyton.

The Brood – David Cronenberg’s classic horror film about an angry woman whose fury causes her to conceive homicidal rage-babies gets the Criterion collection treatment, and includes a full restoration of Cronenberg’s surreal silent sci-fi feature from 1970, Crimes of the Future.

Manos: The Hands of Fate – We detailed the restoration process for one of Mystery Science Theater‘s very favorite bad films – about a demented cult leader who worships a deity named after the Spanish word for hands – here a while back. Now it’s on Blu-ray, side by side with a “Grindhouse” version that features the original scratchy, faded print for added cheese factor. Featurettes detail the restoration and the puppet parody Hands of Felt, while actors Tom Neyman and Jackey Raye Neyman-Jones gamely return for a commentary track.

The Phantom of the Opera – The Lon Chaney silent version of the tale appears here in two versions. There’s the restored 1929 theatrical version, in two different projection speeds, with two different soudntrack options. Then there’s the earlier 1925 print, not-so-much restored, but longer and with additional scenes. At least one should get inside your mind.

Ron Howard’s Dr. Seuss’ How the Grinch Stole Christmas: Grinchmas Edition – Because my wife adores Ron Howard as a role model for child actors who can grow up sane and successful, I am not permitted to say a bad word about him. So I will note that The Grinch is definitely a movie, it most certainly includes actors, and the Blu-ray is supposedly remastered, though the extras remain the same.

Aladdin: Diamond Edition – The animated movie that made Disney seem hip again in the ’90s – and unfortunately inspired rival cartoon creators to think that all it took to make a hit was gratuitous pop-culture references – has all its classic DVD features, plus new commentaries, featurettes and Robin Williams audio outtakes complete with storyboards for what could have been. Yes, “A Whole New World” was syrupy, but never forget that Disney here let Gilbert Gottfried have the biggest role of his career – and it ruled.

The Land Before Time – While Disney still has a certain amount of timeless appeal for me, I feel like I grew out of Don Bluth quite quickly, and as such I have never viewed any of these dinosaur cartoons that have become a monster franchise on home video. I know the people who love them really love this first one, but they may not love that it has zero extras, which seems like a real missed opportunity.

Red vs. Blue: Season 13 – The latest installment of the comedy machinima made with a Halo engine is “the final installment in the critically acclaimed Chorus Trilogy,” whatever that means.

Mosquito: 20th Anniversary Edition – I have no clue what this movie’s about. If only there were a clue in the title somewhere.

Tomorrowland – Give Disney’s summer misfire a shot, and you may find there’s more to it to like than you imagined. People complained that the trailers gave them no idea what kind of movie it was, but that’s part of the fun – while watching, you really don’t know what might happen next, except that it involves two kids, George Clooney, and an alternate dimension that can be accessed via either “It’s a Small World” or the Eiffel Tower, depending what era you’re in. Not everything in it works, but for a simple Disneyland brand extension it’s a whole lot more creative than it ought to be.

My Little Pony Equestria Girls: Friendship Games – We may have recently written about this one in detail.

What else is everyone picking up?