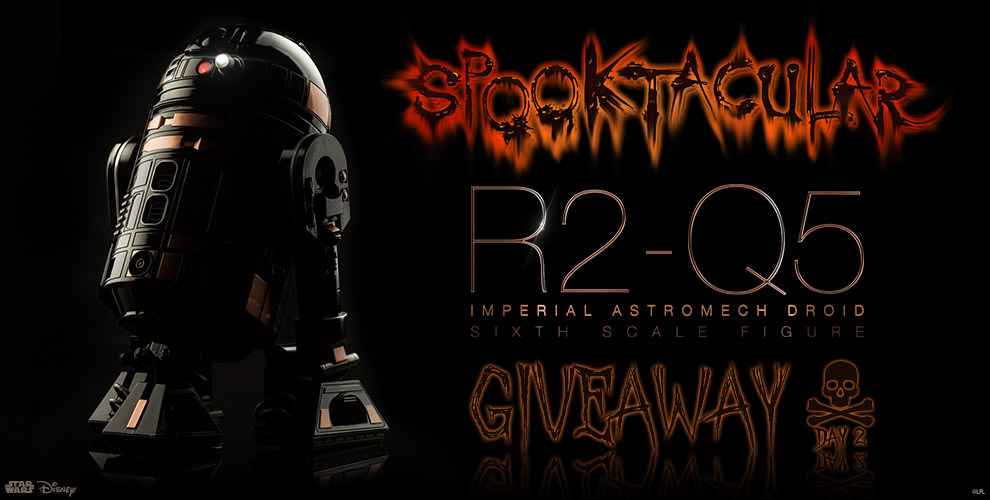 Would you pay $139.99 for what is, effectively, Goth Artoo? Sideshow is betting you will – though they’re also offering a chance to win it.

As everyone’s favorite astromech R2-D2 fought alongside his friends for the Rebel Alliance, his lesser known Imperial counterpart, R2-Q5, played a critical role in the background as a spy for the Galactic Empire.

Wait. Spy? This is why the Empire was doomed from the beginning.

“Good idea. How about one painted to look exactly like the Rebels’ astromech droids?”

“What are you, stupid? We’re the Empire. It has to be black and evil-looking.”

“Nooo…the Garindan spy we used in Mos Eisley wore all black, and he was inconspicuous.”

“Actually, no he wasn’t. Pretty much everyone who laid eyes on him figured out he was a bad guy right away.”

“You know what just occurred to me? Droids are autonomous beings. Maybe we could just, y’know, ask him what he’d like to do.”

“So, R2-Q5, are you sure being all-black is conducive to being a spy?”

“Beep-boop-boo-beep! [‘I hurt myself today/to see if I still feel’]”

“See? What can you do. Lord Vader programmed him before turning cyborg.”

Ready to roll with retractable tripedal treads, hinged panels, and an articulated light-up dome, this delightful droid is perfectly equipped to join the ranks of any Star Wars collection.

He won’t make your bowel movements green – but he might make your cyber-goth friends green with envy.