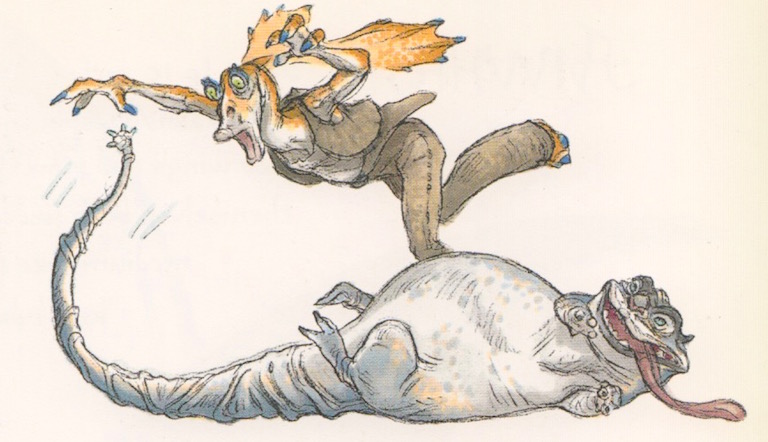 While in hindsight, I think a good case can be made for Jar Jar Binks as a Star Wars plot device – he lucks into heroism and a promotion for which he isn’t ready, and as a result votes for martial law – there’s no denying he is annoying. But he could have been even more so.

In an article for StarWars.com, our own former contributor Steven Romano reveals that the original plan was for him to have a pet alien dog that he would constantly trip over. Because HILARITY!

The notion to pair Jar Jar Binks with a canine companion was entertained during The Phantom Menace’s early stages — intended as a lovable foil or an accomplice in the Gungan’s fumbling antics. Concept art by Whitlatch does exist, but it was eventually decided to keep Jar Jar a solo act and drop the idea…somewhat, at least. The alien canine waddled and slobbered its way into series canon through the book The Wildlife of Star Wars: A Field Guide, illustrated, again, by Whitlatch. Officially known as “blarths,” the initial characteristics were retained for the species, described as laid-back, good-natured creatures whose constant desire for attention oftentimes leads to — if the above image is any indication — innocent disaster.

So originally it wouldn’t have just been African-Americans that were offended by the dopey Gungan, but pet owners as well. Mercifully, it seems Lucasfilm folks were self-aware enough to realize they might as well have just strangled the prequel trilogy in its crib right there, and moved on.

Next I expect to discover that Anakin was originally set to murder kittens rather than Sand People, whose corpses are rough and get everywhere.