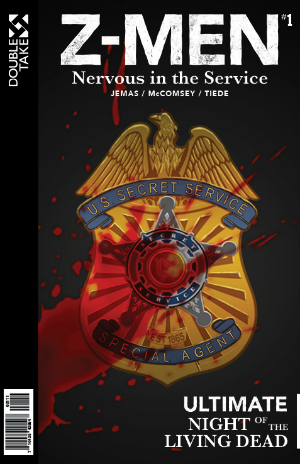 Ah, NOTLD. The go-to movie that every character in every horror movie is watching on TV, and which countless indie productions have shamelessly riffed on…all because it’s in the public domain.

We reported a while back on Double Take Comics aiming to create a sort of Romero-verse set in the ’60s and surrounding the events of the first film. They came out, and our own Jim Dandeneau was less than thrilled. Lionsgate, however, saw dollar signs in the spin-off Z-Men, in which President Lyndon Johnson assigns Secret Service agents to bring him back a zombie.

Quoted from a press release that says almost nothing about the product itself:

“We’re delighted to expand our relationship with our friends at Take-Two by partnering with their comic book arm, Double Take, in bringing Z-Men to the big screen,” said Lionsgate Motion Picture Group Co-Chairs Rob Friedman and Patrick Wachsberger. “We continue to diversify our portfolio with films adapted from novels, video games and board games and look forward to translating 2T’s graphic novel into a spine-chilling film for moviegoers and comic book fans alike. It is yet another example of the strong underlying intellectual property on which our film and television content is based.”

Crap. Board games? Just stop. YOU SHOULD NOT BE PROUD OF THAT.

If I were a betting man, I’d say the premise will be updated to the present and feature a fictional president, because the two most interesting things about the comic are also the factors that probably play less well with the moviegoing teens today.