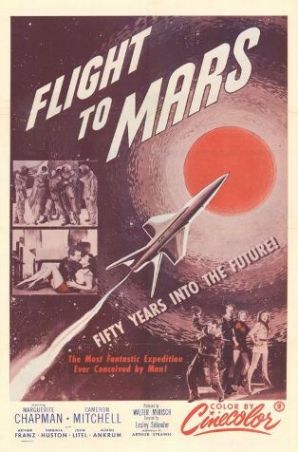 To judge from this weekend’s box office, and from last week’s announcements from NASA, Mars is where it’s at right now. Ridley Scott’s The Martian, based on the hard sci-fi novel by Andy Weir and featuring Matt Damon as a stranded castaway struggling to grow spuds in the Red Planet’s soil, finished big with moviegoers, just on the heels of the space agency’s conveniently-timed confirmation that Mars is moist, at least in spots.

So Mars is in. But for a lot of us, Mars was never out. We were into Mars before it was cool, and quite familiar with many of its more illustrious denizens. Here are just a few of them:

The first truly great pop-culture Martians were almost certainly those in War of the Worlds, the 1897 novel by H. G. Wells. Sci-fi’s original space invaders made to the screen in a big-budget adaptation in 1953 from George Pal, and another in 2005 by Steven Spielberg. Both versions have their merits, but the creatures themselves, when we get a look at them, aren’t especially memorable.

Alas, what might have been. Among the many unrealized projects of stop-motion master Ray Harryhausen was War of the Worlds. He didn’t get to do the movie, but he did create some splendid drawings, as well as test footage of a Martian’s agonizing death throes. Harryhausen recalled director Eugene Lourie observing that he made his creatures die “like the tenor in an opera,” and this is another example of that. 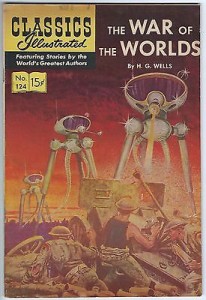 The famous comic book adaptations of classic literature, beloved of procrastinating book-report-writers everywhere, were often pretty tame, even lame, in terms of their art and bowdlerization. It’s possible that the Classics Illustrated War of the Worlds was the best, most imaginative, entry in the series.

In any case, I always much preferred the comic’s designs, both of the tripodal Martian war machines (above) and of the creatures themselves… 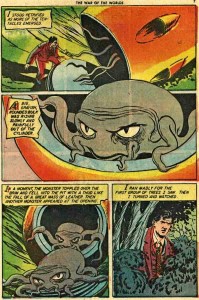 …to either of the major movie versions. Somebody ought to do a Victorian-period movie version, based on this comic. Just for me.

One of the triumphant moments in 20th-century sci-fi was the famous “Panic Broadcast” on Halloween Eve, 1938: The Mercury Theatre on the Air’s version of War of the Worlds, starring Orson Welles and reconceived as a string of radio news updates about a Martian invasion of rural New Jersey and subsequent attack on New York. The second act, after civilization – and thus radio broadcasts – has been laid waste, was a more conventional drama.

Although the degree to which America truly panicked may have been exaggerated over the years, it appears that some listeners did take the show for reality, and got the jittery pre-WWII crap scared out of them. Listening today, this may seem hard to believe, considering the alacrity with which events unfold in the play. But even if a modern listener might not take the show for reality, the Mercury Theatre’s WOTW still holds up well as the nightmare epic of the theatre of the mind, and is an essential part of nerd literacy. Much of its power is due to actor Frank Readick, imitating the Hindenburg guy, as newsman Carl Phillips, reporting as the Martians emerge from their ship. His description starts around 15:25 in the clip above. 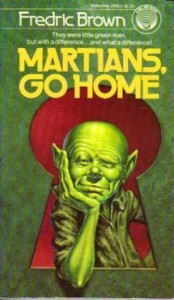 By tradition Mars is, of course, the home of Little Green Men. In Fredric Brown’s 1954 classic Martians, Go Home, said Little Green Men are simply dickheads and voyeurs. About a billion of them invade earth in phantom bodies, for no other apparent purpose than to amuse themselves by observing and insulting humans.

Randy Quaid starred in the 1989 film version, in which The Martians were played by various obnoxious ‘80s-era comedians. It was Rob Schneider’s movie debut. 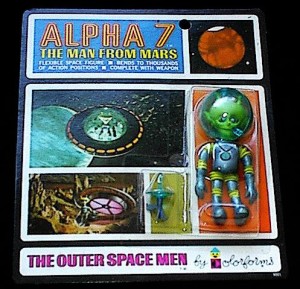 Not many action figure series have ever been as cool as the Colorforms Outer Space Men of the late ‘60s. Created by designer Mel Birnkrant, each member of the bendable original line was a representative from a planet in our Solar System, though they often showed mythological as well as science-fictional characteristics: Commander Comet, a Tom of Finland-ish angel-winged Venusian; Colossus Rex, the scaly, mace-bearing badass from Jupiter; Xodiac, a pointy-eared, demonic-looking sort from Saturn; the brainiac Orbitron from Uranus; the tentacled, trident-bearing Astro-Nautilus from Neptune; and Electron, the blue-skinned fellow from Pluto, still considered a planet in those days. Earth wasn’t represented, nor, for some reason, was Mercury.

Colossus Rex was the one that, as a kid, I most coveted; he was my equivalent of Ralphie’s Red Ryder, except that I never got him. But I did have perhaps the most archetypical member of the series: Alpha 7, the classic green man from Mars. He came with his own helmet and ray gun, and with a guileless and openhearted expression on his face.

That’s what the clip calls it anyway; I see the rat and the spider, but not so much the bat. There’s also a little crab or lobster or crayfish or prawn to it, in the pinchers.

Anyway, this specimen of the Martian fauna is probably the most memorable of several encountered by the Earth explorers in Angry Red Planet, Ib Melchoir’s 1959 fave. The Mars scenes were shot in a red tint which can make you feel like you’re suffering a cerebral hemorrhage while watching.