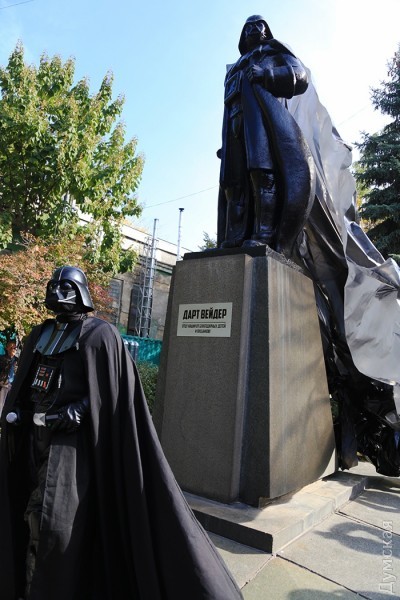 Ukraine knows a thing or two about tyrannical leaders who want to forcibly create an Empire, but while Vladimir Putin would undoubtedly love them to erect an effigy in his honor, they gave it to Darth Vader instead. Thanks to a new rule against monuments to Soviet communism, a statue of Vladimir Lenin was set to be demolished, but instead the residents of the town decided to turn him into everyone’s favorite Sith Lord – with a wi-fi hotspot in his head. I’d like to think Lenin would have appreciated the irony on both counts.

The opening was attended by “Vader” himself, flanked by Stormtroopers, one of whom was driven in a dune buggy by “Chewbacca.” Local outlet Dumskaya.net has some amazing images, and this quote, as roughly translated by Google in what sounds like a pointed jab at former president Viktor Yanukovych:

“At first I was strongly opposed to the creation of this monument. I thought it was overkill. But the campaign looked, I calmed down: this is the fact. Previously, it was necessary to die in order for you to remember.Therefore, during the life of the monument is particularly pleasing. I wish all politicians behave the way that they erected monuments in his lifetime, ” – said Vader.

Rather hilariously, the Hollywood Reporter story that picked up on this is bylined “Vladimir Kozlov.” It does not appear to be an April Fool.