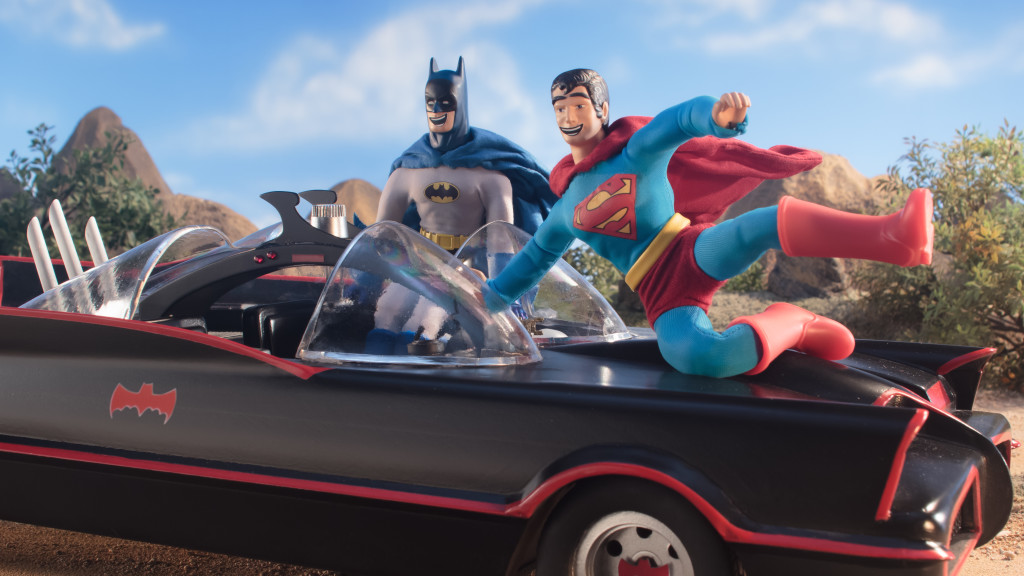 “Magical Friendship,” a title Robot Chicken’s creators swore to us at Comic-Con was not based on My Little Pony, is the third full-episode DC Comics special, and deals with the bond, such as it is, between Superman (Breckin Meyer) and Batman (Seth Green). In this episode, it’s a friendship that goes south when Superman starts mocking heroes with no powers, and winds up unleashing a competition that will break dimensional boundaries, ushering in multiple alternate versions of each character.

Among them are a Batrusi-dancing Adam West Batman, and a badass, leather-jacket clad Burt Ward. The team had no idea when writing it if they’d get the real actors, but it was always a goal. “I mean, it was one of those dream scenarios where you write something, you hope for the best, and then it was about going out to them,” says show cocreator Matthew Senreich. “But the good thing is Seth gets to work with Adam on Family Guy, so we know he had a direct connection to Adam, and could ask him. But then with Burt Ward, you know, it was the fingers crossed, hopefully he would do it.”

“I wrote [Ward] a letter,” says Green. “Yeah. We were like, ‘Dude, we love you! Please come! We’ll make you look awesome! Your puppet’s going to be RIPPED! You’re going to throw the Mego Robin in a trunk. Come on, man!.'” Ward, who had never seen the show, agreed on one condition – that although he’d be willing for his character to behave badly, he would not swear, as he still takes his responsibility to be a good public face for Robin seriously.

But you don’t have to worry about Robot Chicken losing its edge – an extended Big Lebowski reference includes Penguin having an erotic fantasy about the Boy Wonder. “He’s incredibly distracting,” says Green. DC’s Geoff Johns had no objection, adding “the characters are unbreakable. They’ve survived a lot of bad interpretations. They can survive a few jokes. I think that you see a character like Batman, in particular, or even the Penguin, but they’re so elastic. They can be for Robot Chicken or they can be for a four-year-old kid, or they can be for us, you know. Comics, or the Nolan films, or Gotham – whatever. You can’t treat them like china. You’ve got to have fun, and if you’re going to do Robot Chicken, you’ve got to do it. Otherwise, let’s not do it.”

Adds Green, “We’re at a disadvantage, because we’ve had to learn all this stuff in real time, and kids that are born now or are born in the last five years, they’re introduced to all of these characters…as something that has always existed, as something that is indefinable by time. A dozen different ways into it, and they can love every one of them. ” 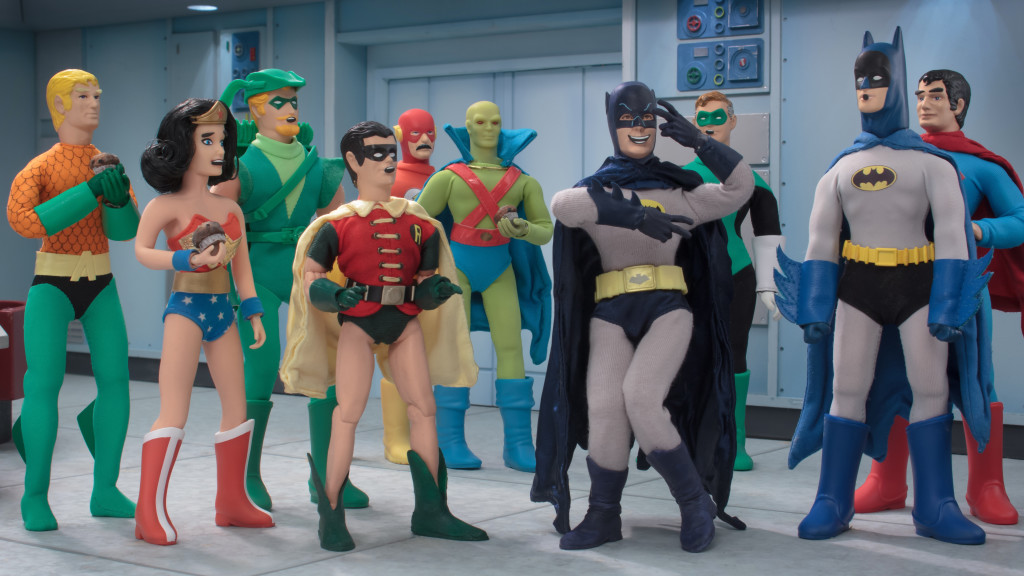 Green had been waiting for a while to get Composite Superman into an episode, and this one provided the perfect opportunity. ”

The second season of Robot Chicken, we got sent a big package from DC direct, all of the figures of that series, and one of them was composite Superman, and I had seen that character in comics and thought it was the dumbest character on the planet. And I pulled out the toy and I set it in the center of our table, and I was like This fucking guy! This guy! Why would an alien come here and say ‘I’ve taken the form of the nation’s two greatest super heroes, only one of which has super powers’? So what does that mean? That this other side is just wholly fallible? And that character was actually the inspiration for our Christmas hero composite Santa Claus.”

Senreich adds, “And I just love that Superman immediately names him composite Superman before Batman gets a chance to do anything.”

Senreich: “And it’s over. And he’s got green skin for no reason.”

I try to gain nerd points by noting that in fact, Composite Superman in the comics has all the powers of the Legion of Super Heroes, but Senreich will have none of that, saying, “This is our own version. Multiverse. We can goof around in that way!” 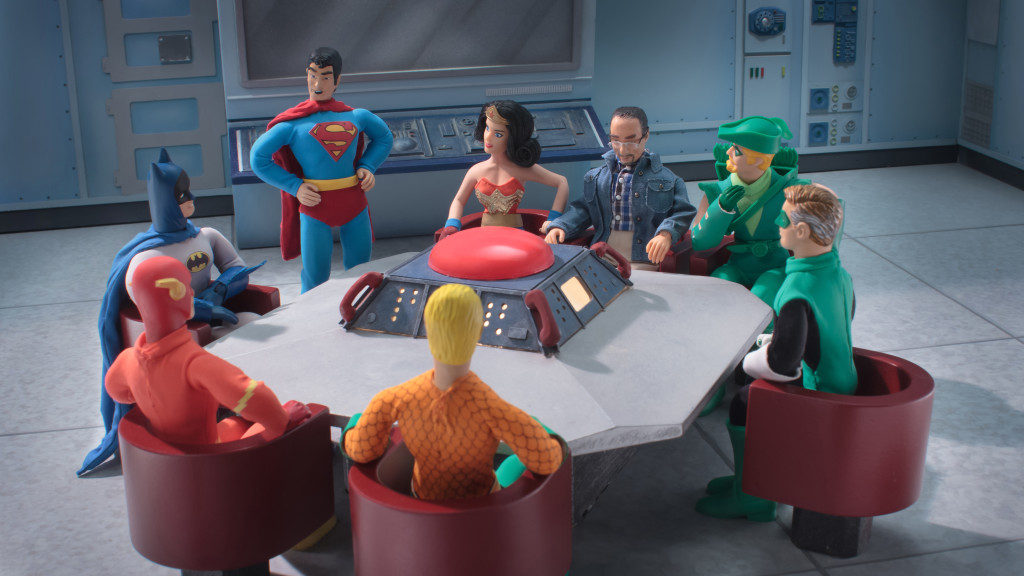 When it comes to favorite versions of characters, however, the Robot Chicken team and Johns are still partial to the Super Friends perception of Aquaman, who gets monkey shit flung in his face this time, among other indignities. Says Johns: “I also think there’s something cool to have that thread of Aquaman, regardless of how cool the interpretation is–whether it be in film or comics or whatever–to have that thread, that undercurrent, no pun intended–to have the public underestimate him, or make fun of him, or not understand him, or him feeling ridiculed or like an outcast, because it’s inherent to his personality that he’s going to have a chip on his shoulder and he’s got to deal with it.

He’s got a little bit of a perception that’s not justified, and I think that’s actually cool. I think that makes him interesting. I like to root for the underdog, and when I did Aqua Man, I didn’t shy away from it. I’m not, like -I think the mistake can be we’re going to make him the most bad-ass character, and you go too far that way. I think it’s OK to interpret or incorporate some of that public perception-that he’s not cool, that he just talks to fish – to put it in there, and that he has to deal with that.”

Jason Momoa may not agree.

Is a Robot Chicken DC comic book ever going to be on the table? Johns isn’t sure. “You know what, it’s tricky! I don’t know. I would say it should be like – we should probably do it like Twisted ToyFare Theater. Where it’s pictures of the characters. It’s hard to draw that stuff and make it as funny. It’s funny because of the tactile toys. Seeing our toys come to life and doing it. But there could be something there, yeah.”