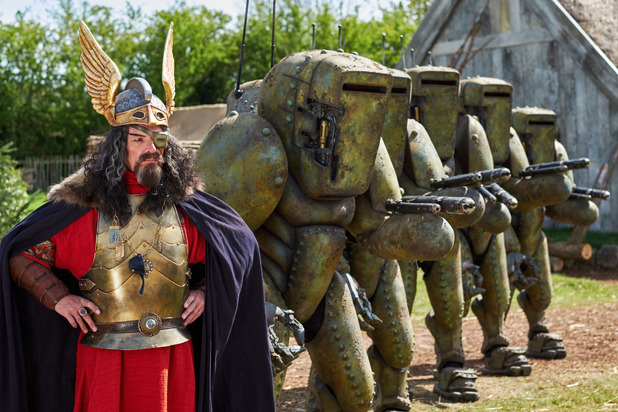 I’m always happy when Doctor Who does something I don’t expect, and you may remember that when the “Big Daddy” aliens above were first revealed, I took a wild stab and suggested they were most likely misunderstood creatures perceived as a threat only because they happen to be large and dangerous-looking.

Happy to be wrong. Though I did spend the whole episode wondering why they were called “the Maya,” only to realize after reading another writeup that everyone was actually saying “Mire,” but, you know, Britishy.

Now I must chastise – horn-hats on Vikings? Really? Did we forget this show was originally meant to teach children about history and science? (Come to think of it, a straight historical episode without aliens would be a welcome break at this point.)

Assuming thematic intent for the whole season, it looks to me like the Doctor’s arc is going to be this:
1. “I’m going to die! I’m scared and I can’t change it!”

3. “Geez, I went overboard with step 2 just a bit, unleashing something terrible” with a possible side of “Clara sacrifices herself AGAIN just to teach the Doctor a lesson.”

And electric eels as the key to beating a space army? Sci-fi treats electric eels like they’re magic and can do anything – see also Jamie Foxx as Electro – but if they really could take down armies don’t you think real-life militaries would be breeding and stockpiling them?

Maisie Williams’ character exists to prove that Norsewomen could be just as stupidly braggadocious as Norsemen. Girl power? Also, let’s make her immortal and give her the power to make one other person immortal too. That can’t possibly drastically change history. You realize, fellow nerds, that Doctor Who basically just gave you the Highlander II origin story that you hated at the time, right?

I liked the Doctor pretending to be Odin, only to be cut off by another fake Odin. Moments when he has to cover for having been full of shit are always fun. And I CHEERED when the sonic shades were broken in half – when you write the gadgets and the TARDIS as too powerful, you then have to bend over backwards to explain why it can’t do the thing next time. Like, instead of electric eels, shouldn’t there be a far more efficient power source onboard? Why not make the TARDIS materialize around the Mire, and drop them off on an asteroid somewhere? This is why classic Who always had it malfunctioning somehow, but it’s like they think modern audiences won’t buy that the Doctor never fixes it. Instead, too powerful but with situational excuses.

The big question for next week is who Maisie gives the other healing patch to. Unless it’s Hitler, I’m not yet fascinated by that mystery. But speaking of mysteries, we finally got the official retcon explanation for Peter Capaldi having previously appeared on Doctor Who – the Doctor chose the face to remind him to save people.

Which begs the question of why he will choose Tom Baker’s face again sometime in the future. To remind himself he was once into Jelly Babies?