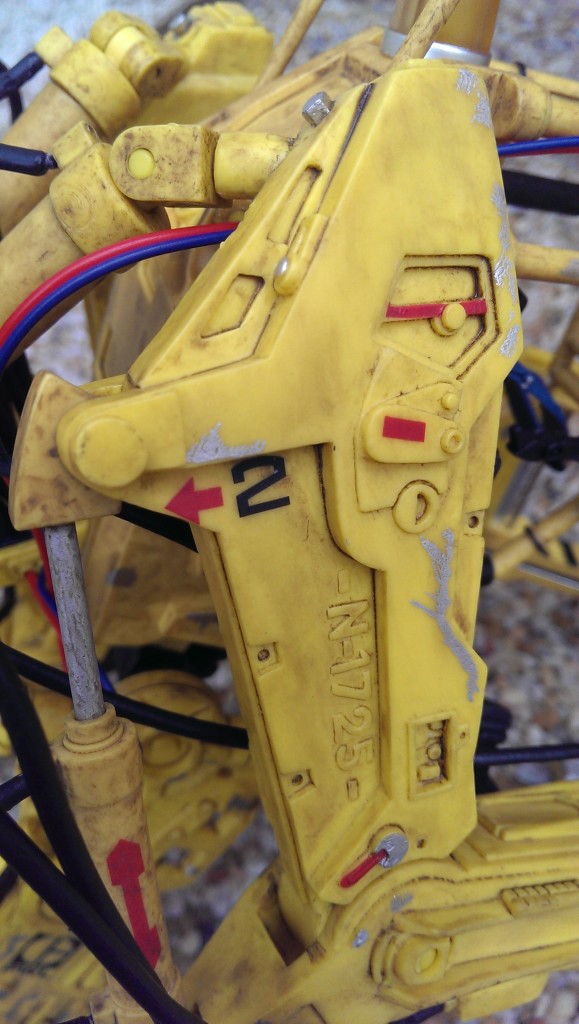 When you prefer larger figures, it’s tough to get vehicles or diorama sets for them, unless you want to go Hot Toys-style all-out and have a giant TIE fighter that costs as much as a down payment on a house. But every once in a while there’s a single-figure vehicle that’s both iconic and doable, and the Aliens Power Loader fits that bill in every way. Sadly, even though it comes in a fairly reasonable-sized box, this won’t be appearing in most chain stores, which seem to consider larger items from NECA to be high-risk/low-reward. It will be available on Amazon shortly, costing upwards of $100, which may seem steep for the size, but you’ll see why soon enough. 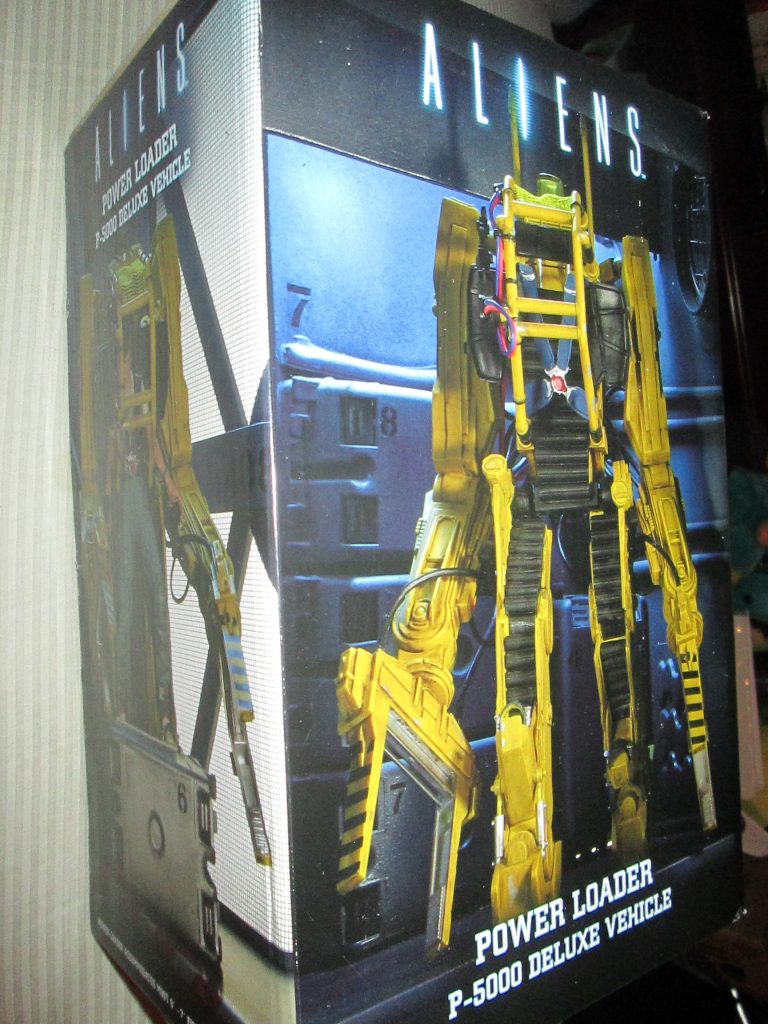 The box does not have a window – if you want to see the toy, you’ll have to open it. But unless you’re a stickler for unbroken pieces of tape, it’s pretty collector-friendly, and certainly far more so than NECA’s 18-inchers. 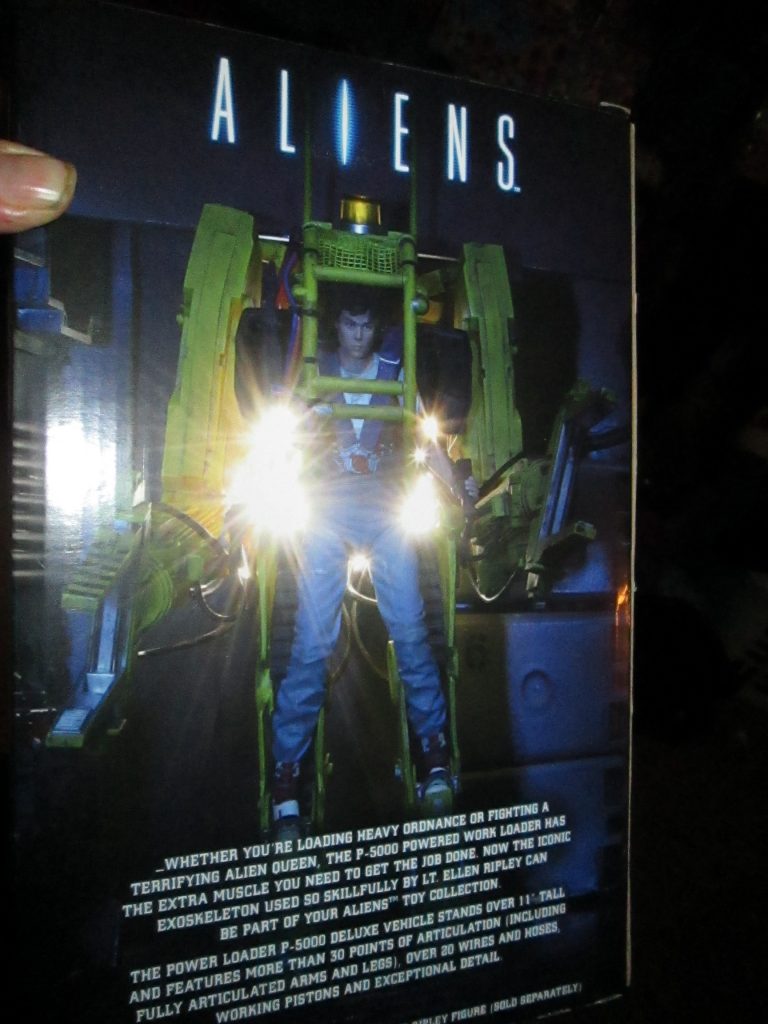 The flash on the far-left is my camera; the others are part of the artwork. 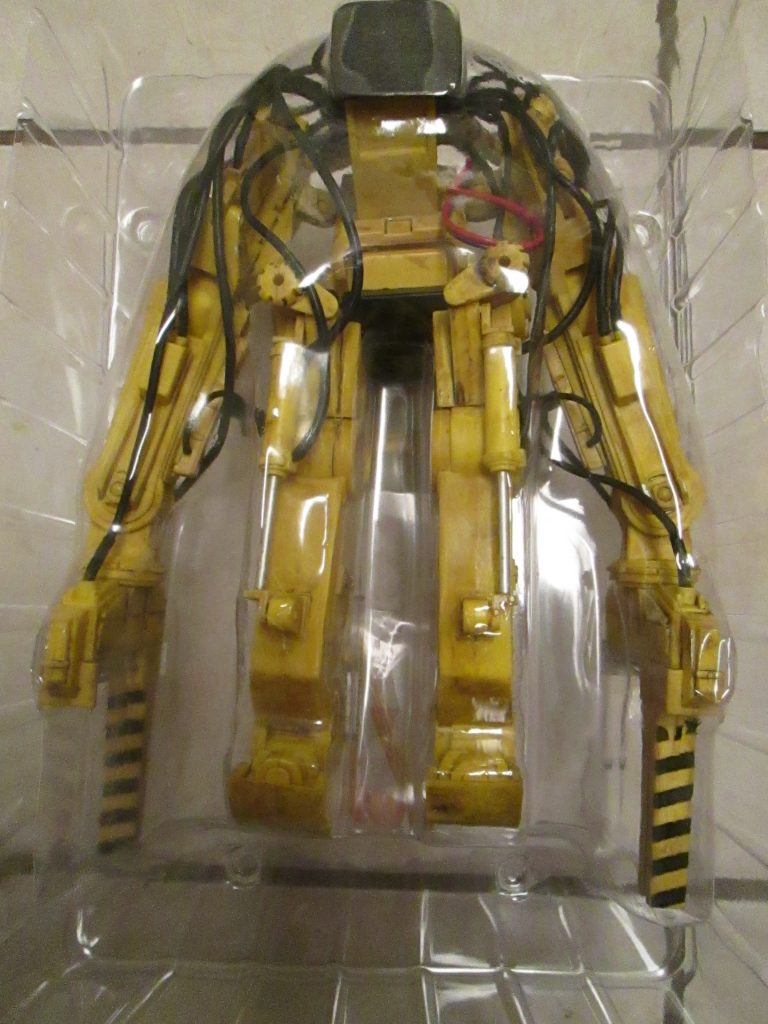 The Power Loader comes simply sandwiched between two plastic trays. No twist ties or anything like that, though it does come with a little plastic bag that contains two missile-like spikes that I eventually figured out plug in upright to the top of the toy (they’re removable to allow the roll cage to open all the way), and also a set of hands for a Ripley figure (not included) to grasp the controls. 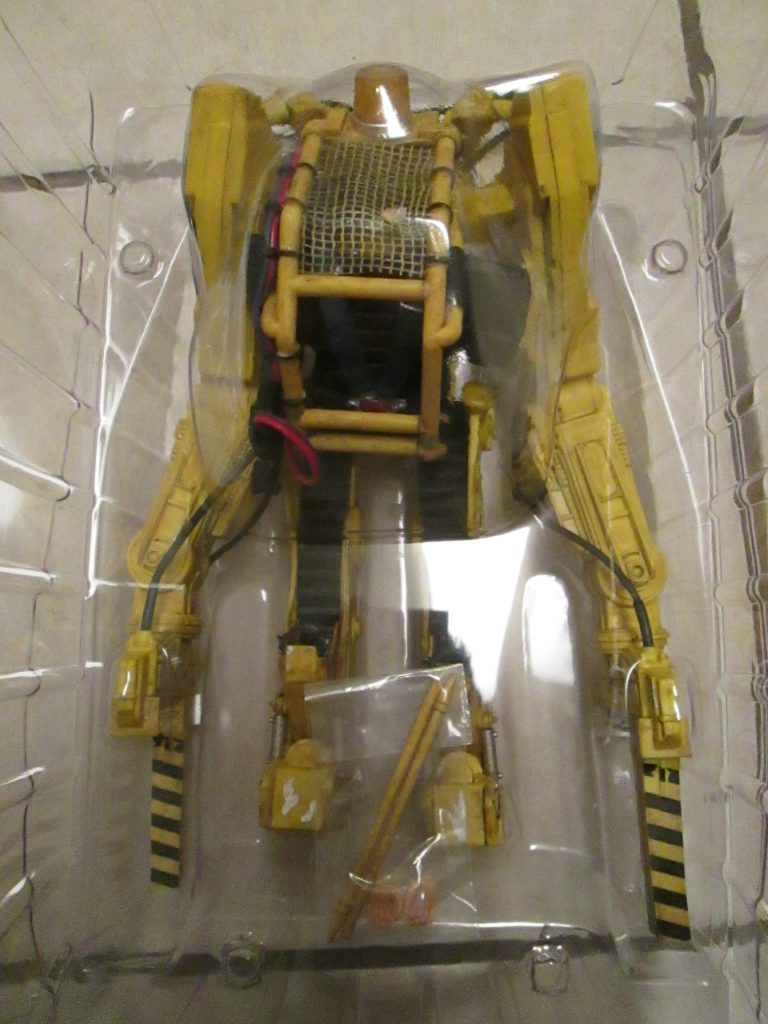 Since I don’t yet own a Ripley, I’m about to commit franchise blasphemy… 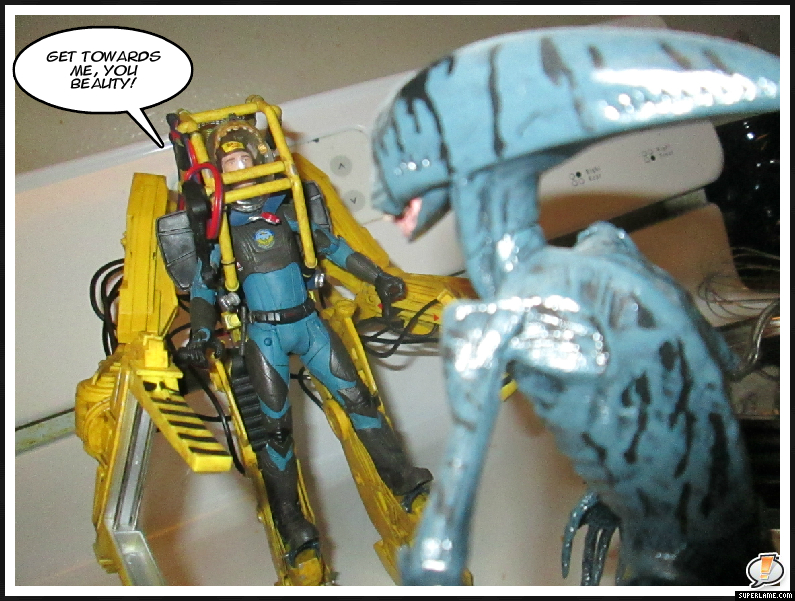 Yes, that’s Michael Fassbender’s David, also by NECA – and he’s really too big to fit properly, especially his feet, which are a lot larger than the stirrups. You can absolutely forget about the seatbelt, which features three straps that come together in the middle.

Go down in scale from NECA males, though, and a lot of 6-inchers can make a go of it, especially if they’re very articulated. 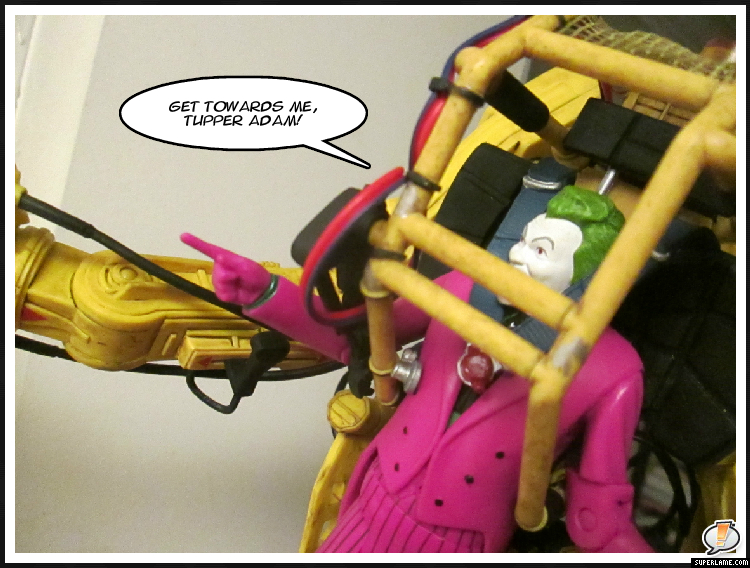 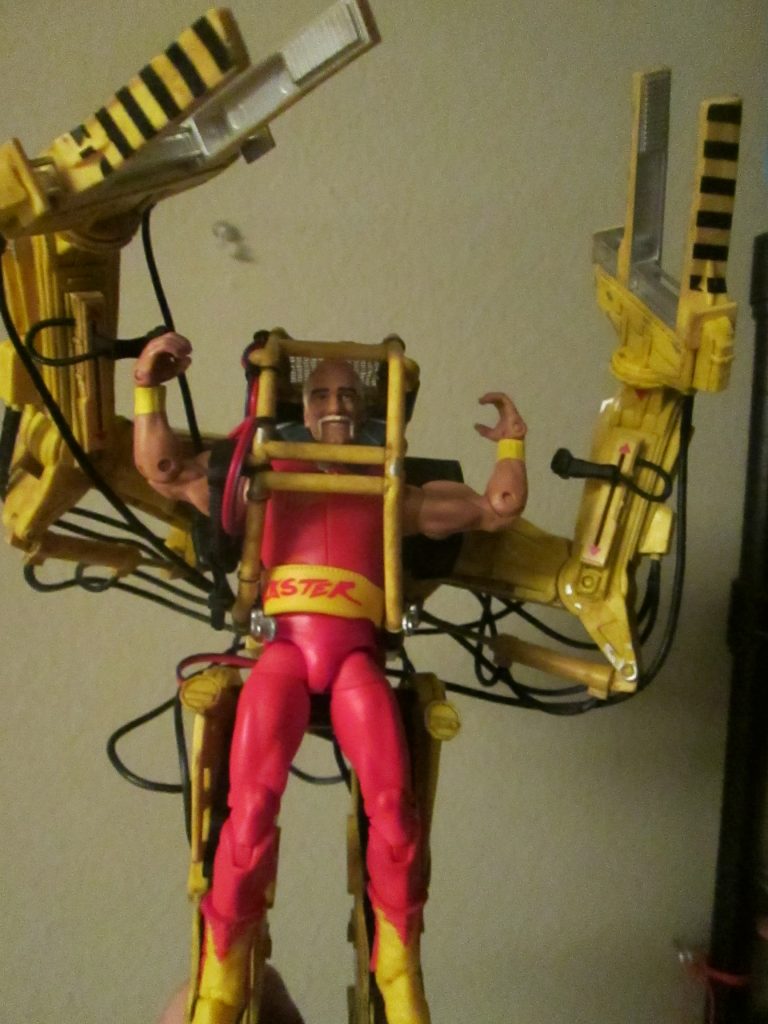 That’s why it’s a shame Toys R Us won’t be carrying this – while it is officially an elaborate collectibel for adults, it is also solidly constructed and a decent toy. Unlike the McFarlane Toys Matrix APU that came out years ago and would break if you breathed on it, this feels like it could fall of the shelf and still be okay.

The points of articulation are honestly too numerous to count – it features many piston style joints like they’ve done in previous Robocop and Terminator figures, to the point that you can “hand-puppet” the arms if you like, by manipulating the pistons on the back. 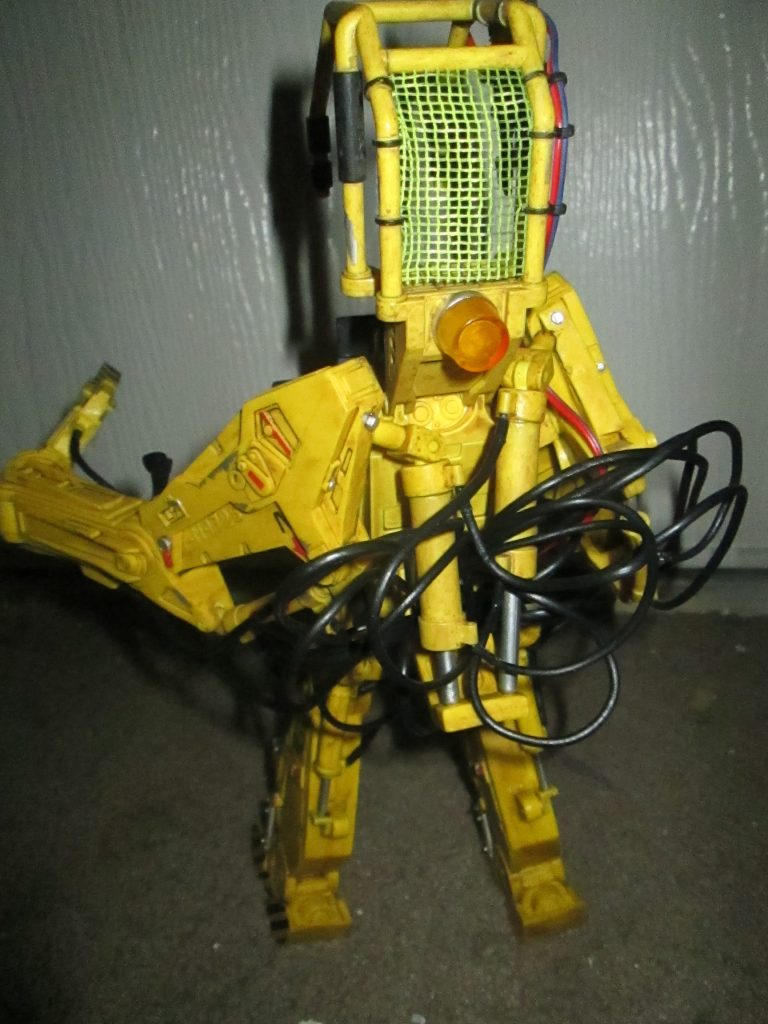 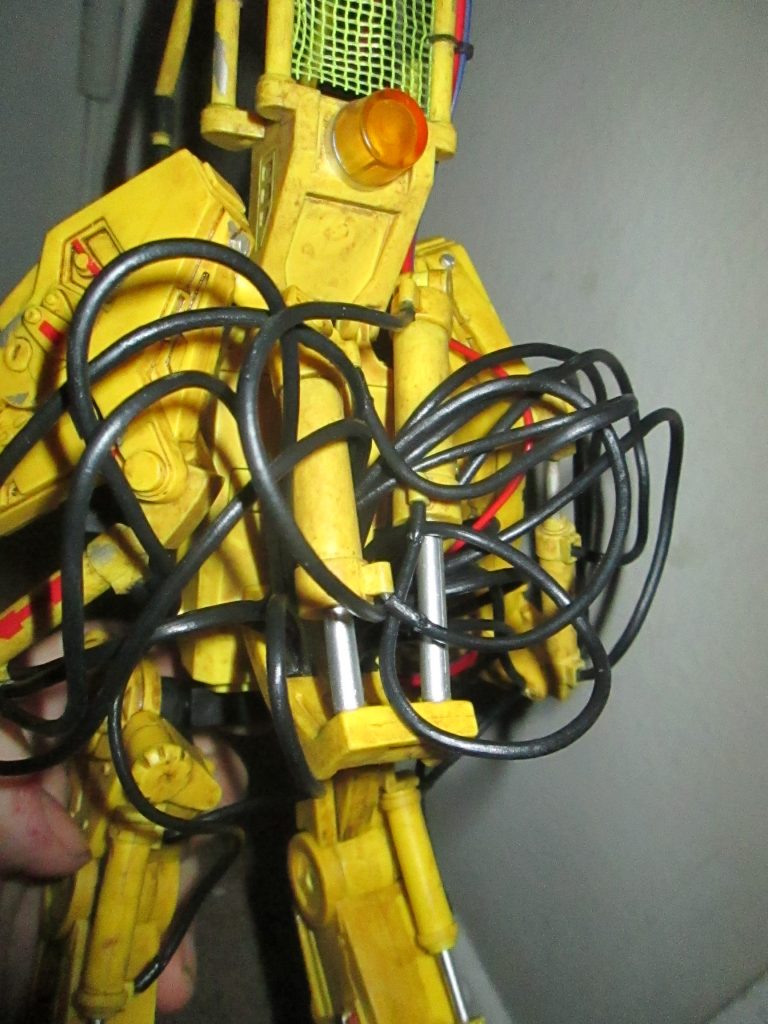 In addition to multiple shoulder joints, the arms move at the elbows and wrists, and the grips on the claws slide up and down two thin metal bars. The ankles are articulated but quite stiff – it took me a while to figure taht otu, but they’re crucial to getting it to stand properly. Hips are ball-jointed. 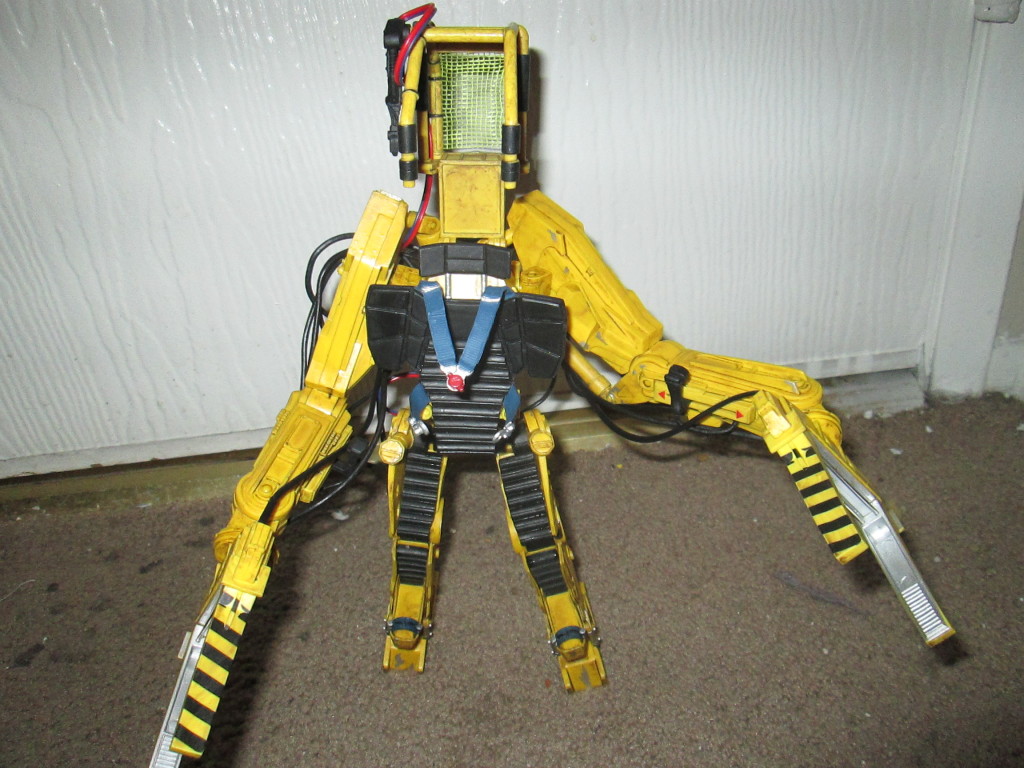 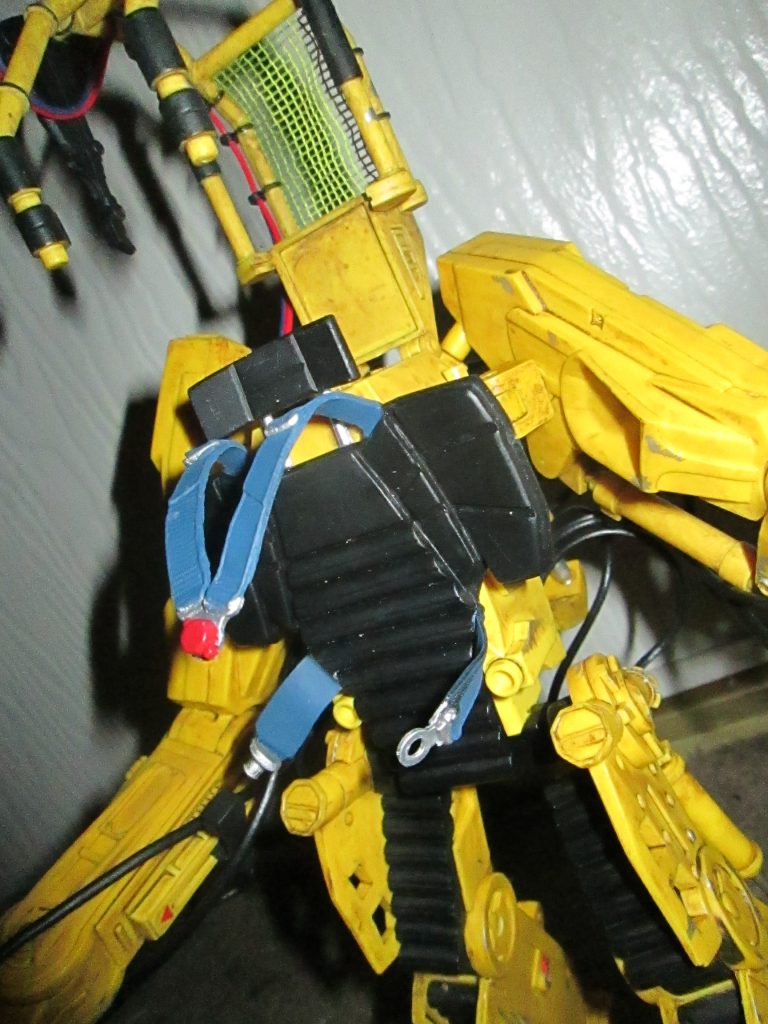 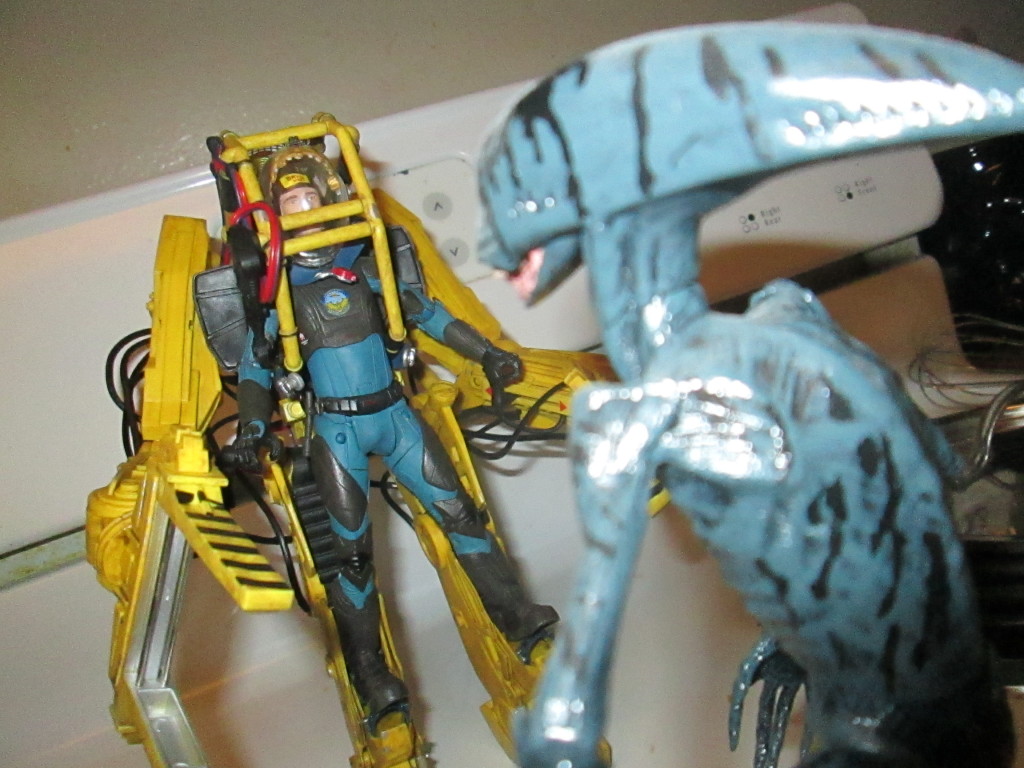 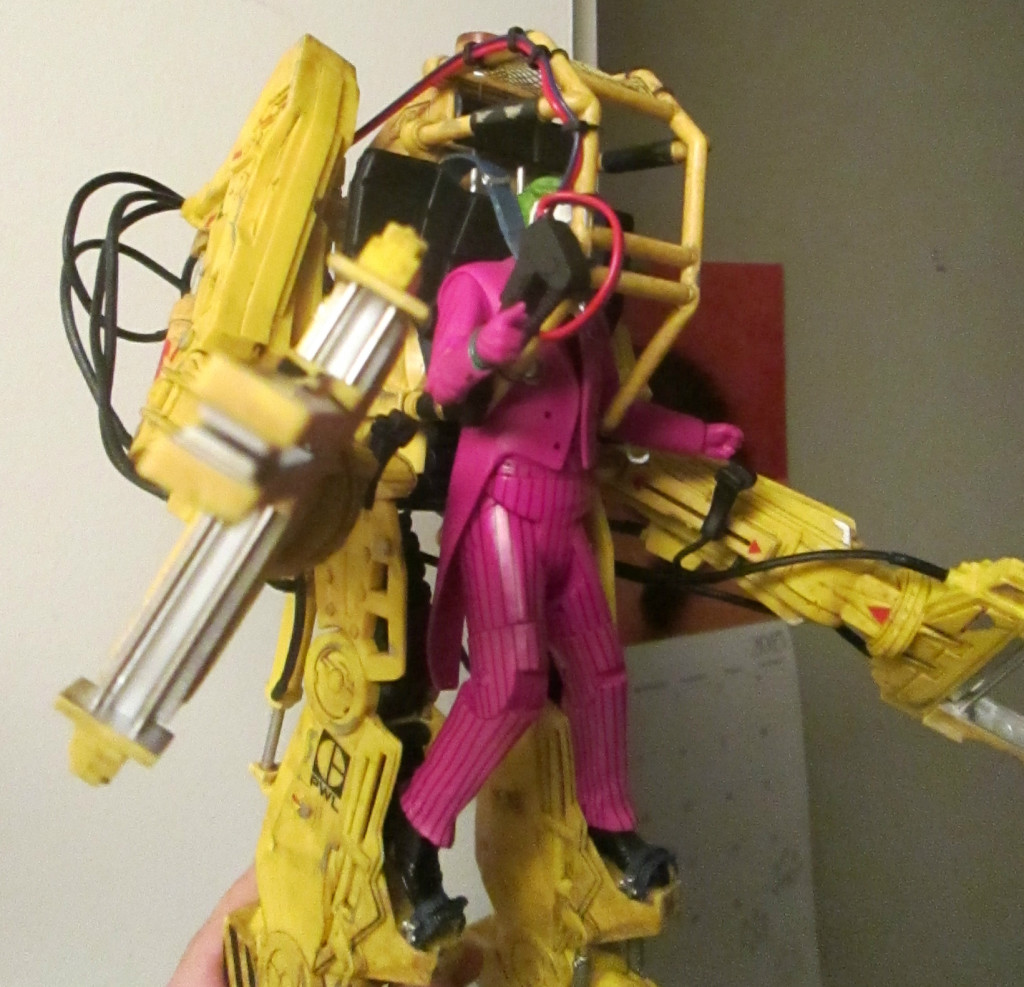 The detailing is top-notch as always, with a dirty wash and bits of metallic wear and tear. 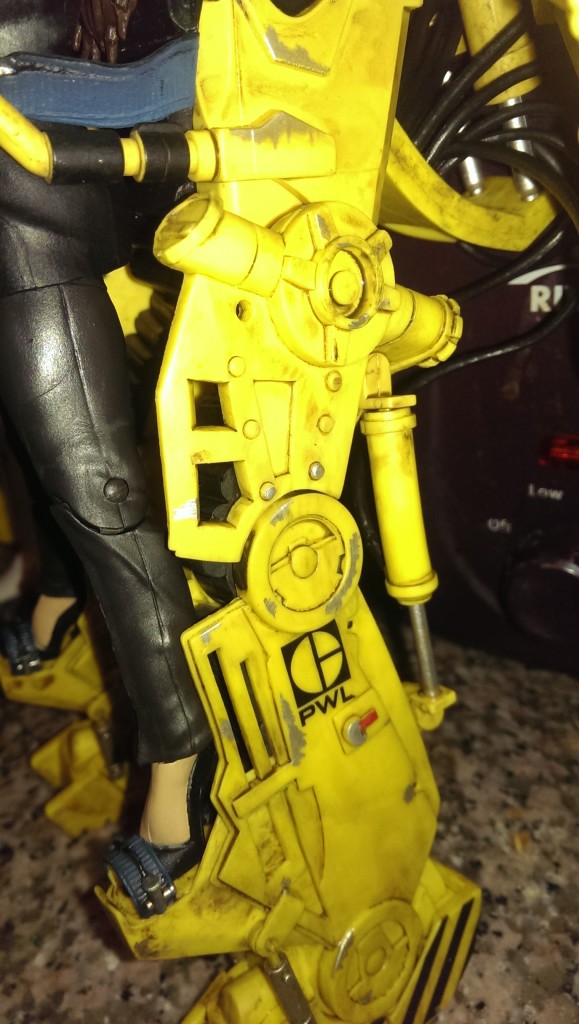 The net on the roll-cage is stiffened, painted cloth. 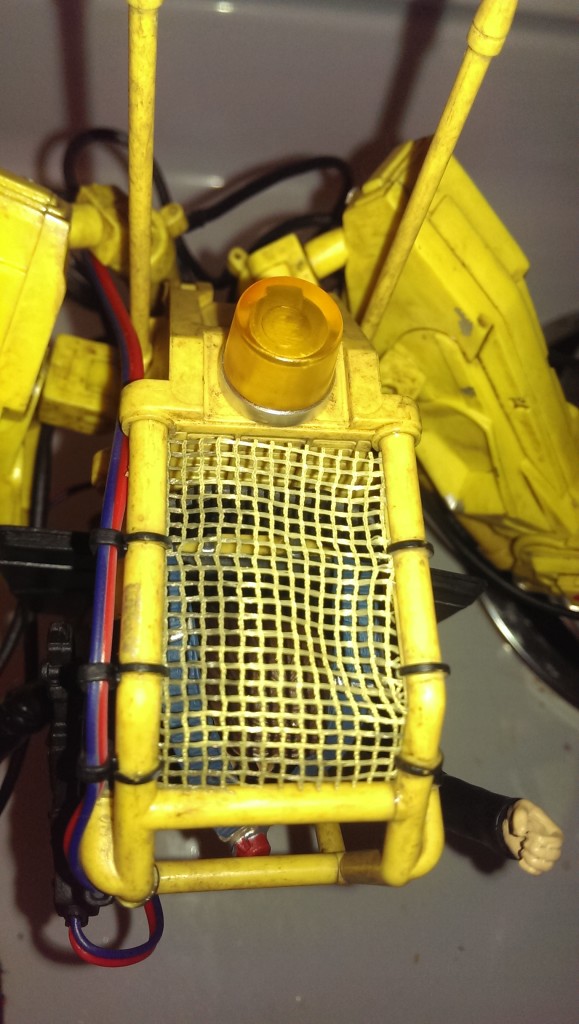 Sans Ripley, I’ve elected to let Stephanie McMahon be my model in the next batch of images, which seems appropriate, since she has to grapple with an oversized, drooling monster every night. Even though she’s smaller than a NECA figure, I couldn’t get the belt to work. I suspect when I do get a Ripley, I’ll have to pop her head off to fully secure her. 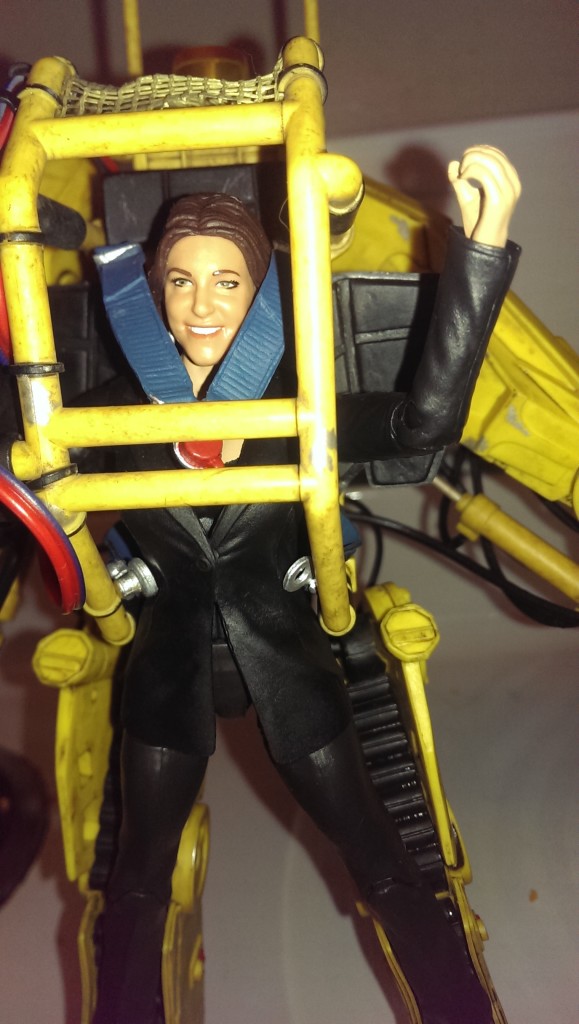 Seriously, look at the articulation on this thing. That’s why it’s $100. 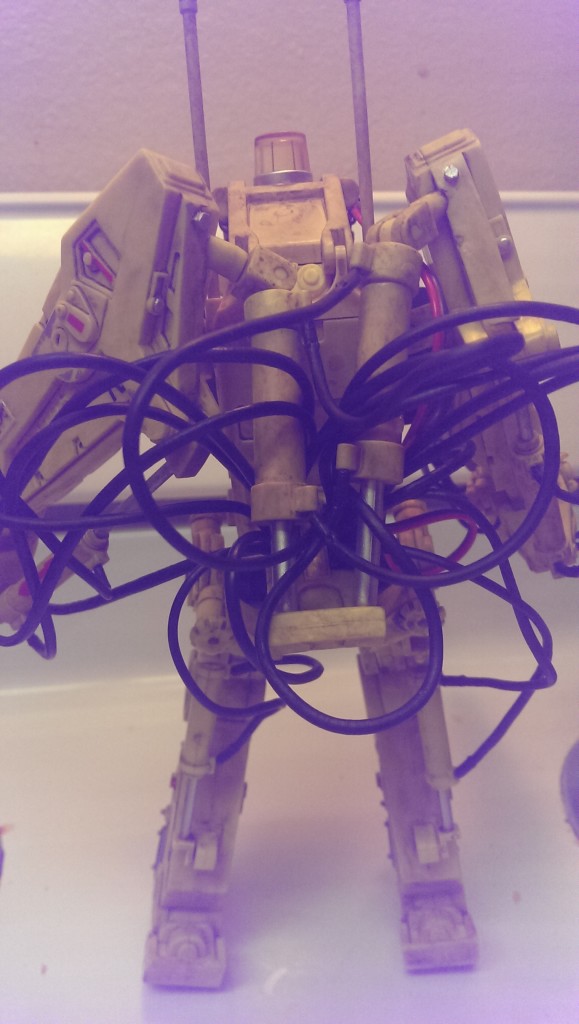 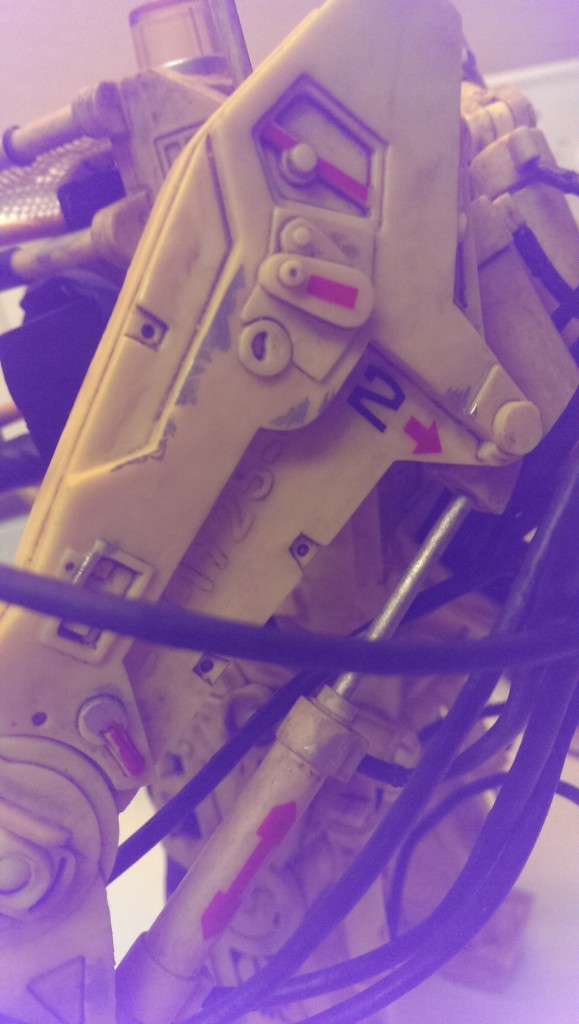 Also, the control joysticks even slide forward and backward to accommodate different figure arm lengths, and different poses for Ripley. That’s a detail most companies wouldn’t have even considered. 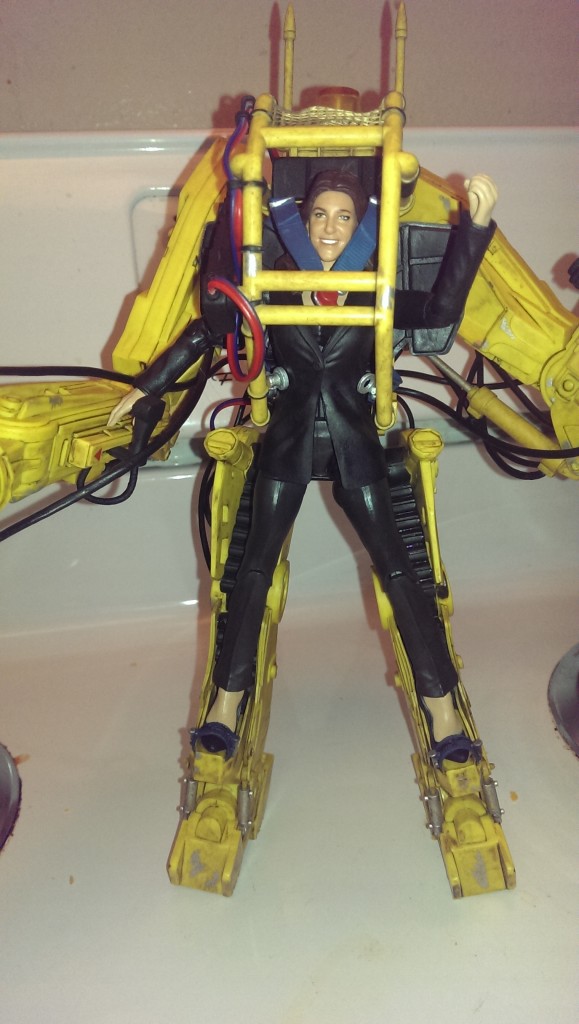 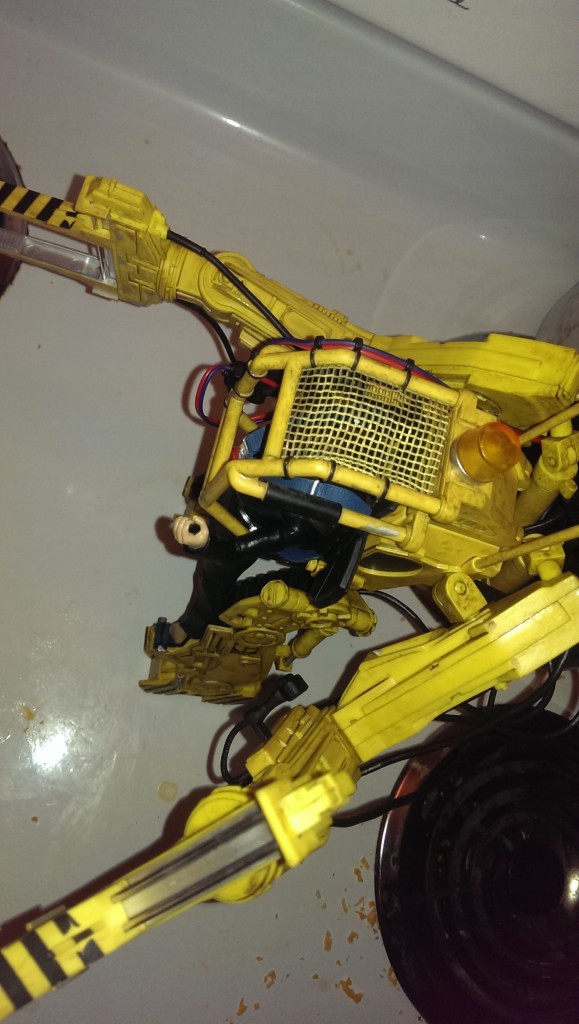 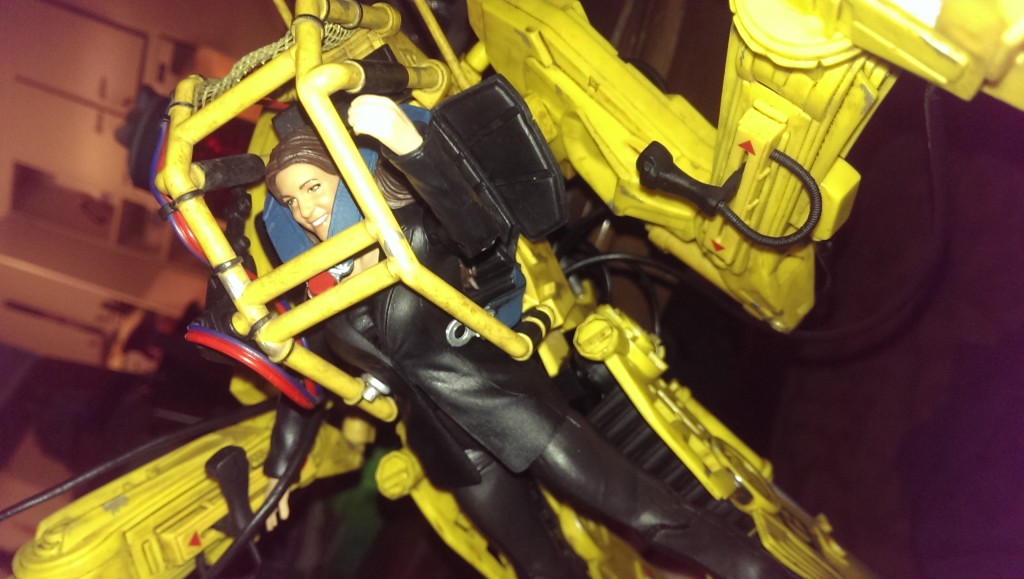 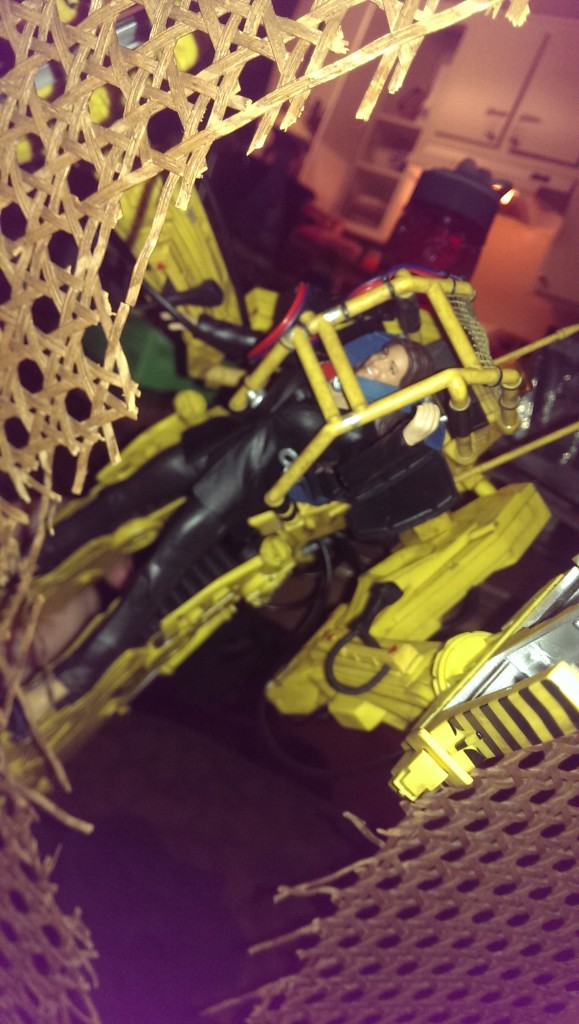 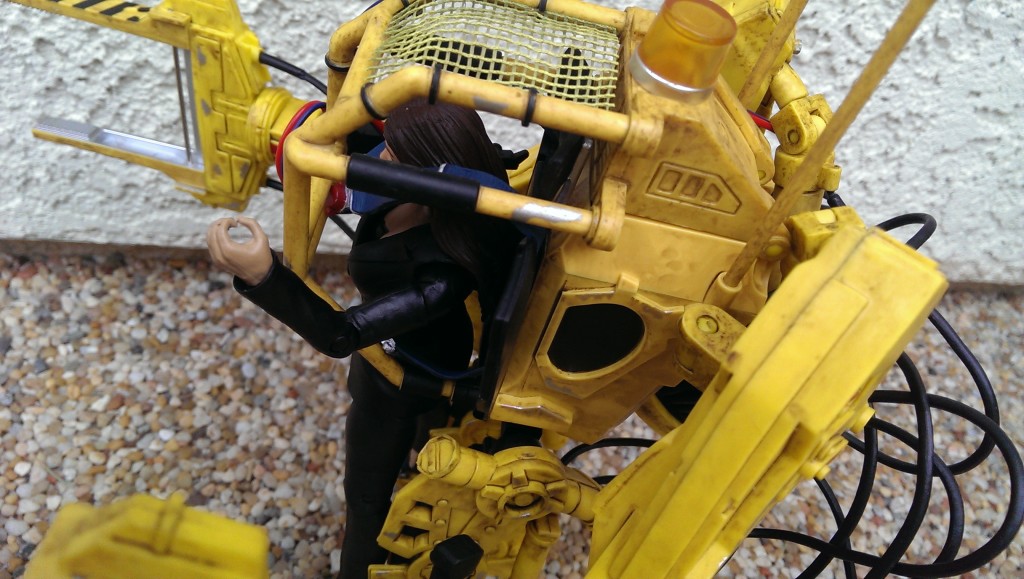 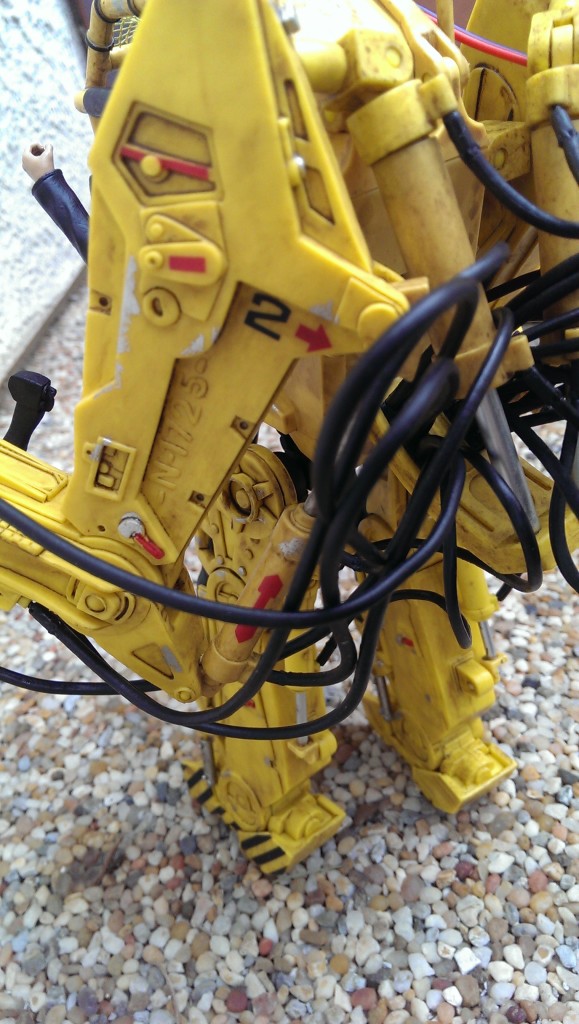 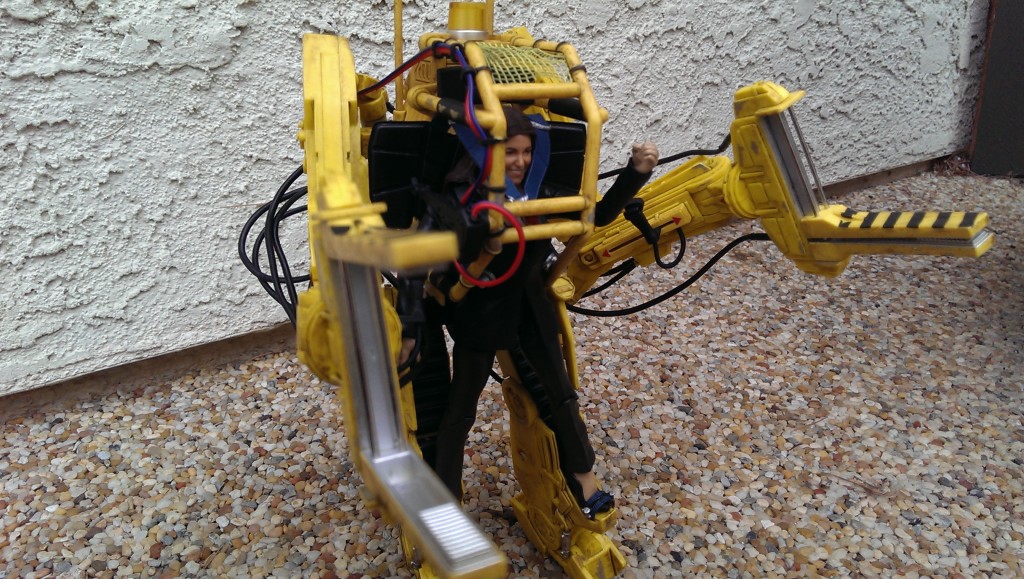 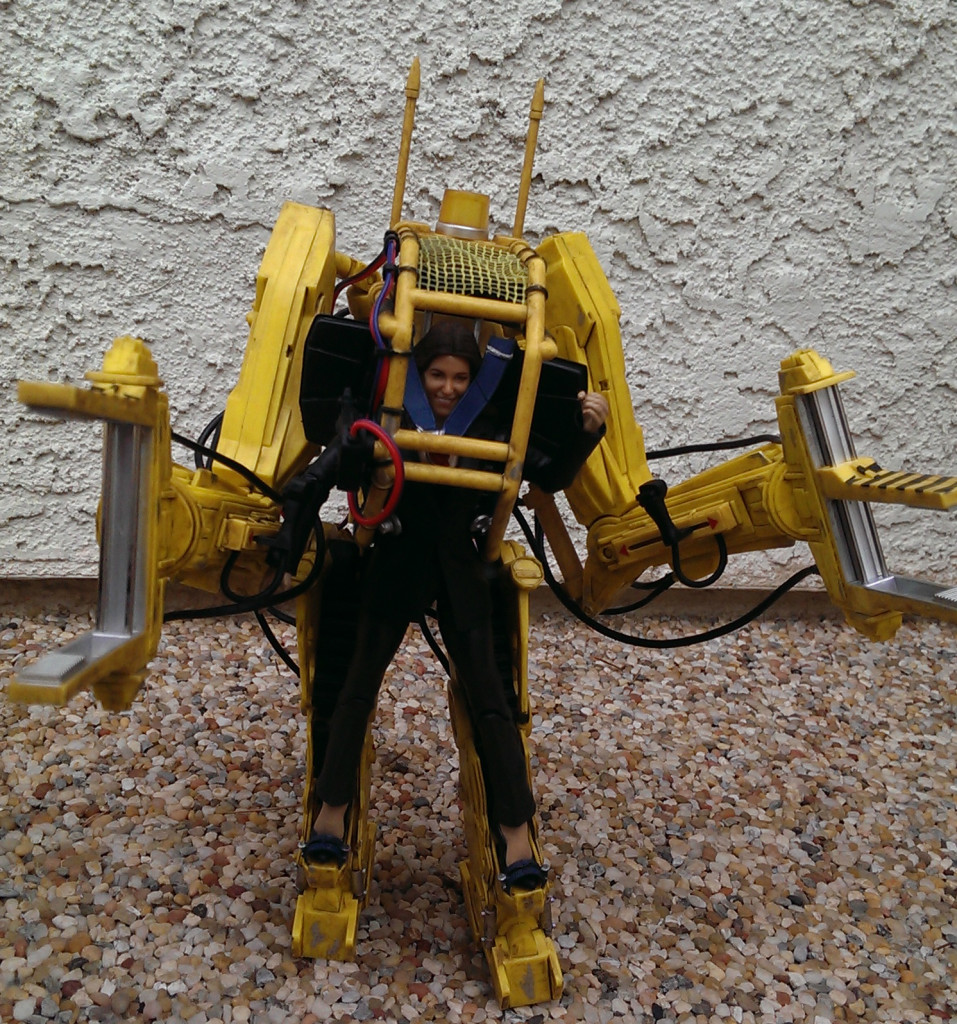 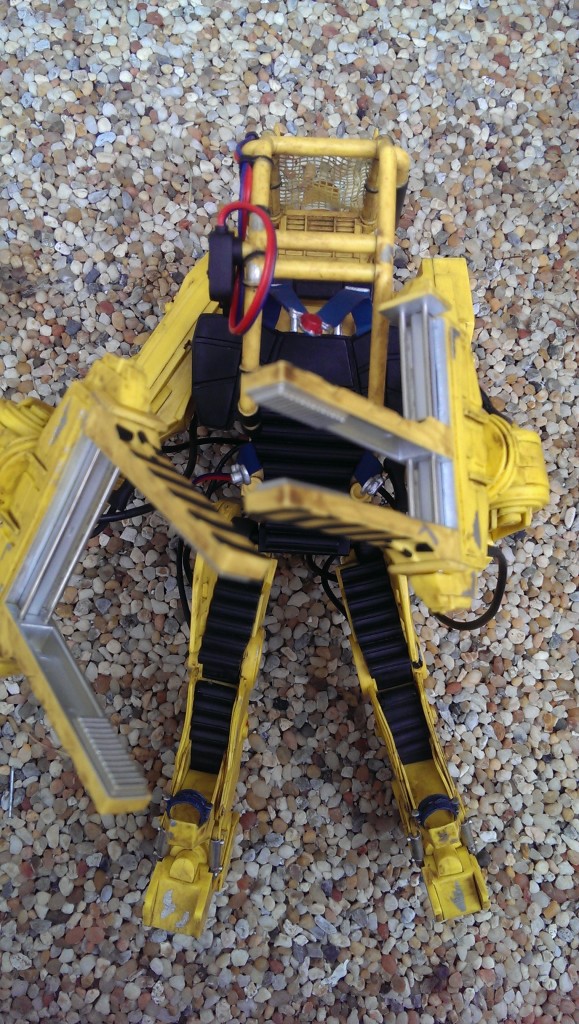 Now, sure, this isn’t cheap, but if you have any kind of McFarlane and/or NECA Aliens collection, it’s kind of a necessity – and you could have either gotten something like Kenner made for the mass market in the ’90s, or a screen-accurate piece of work that does everything it is supposed to (short of lighting up – that might have saved us an extra $20 or something). I haven’t seen an Aliens Ripley in stores yet, but I look forward to introducing the two. And I also have to find a Queen now. Dammit, NECA, you just pulled a total pusher move with your plastic crack! 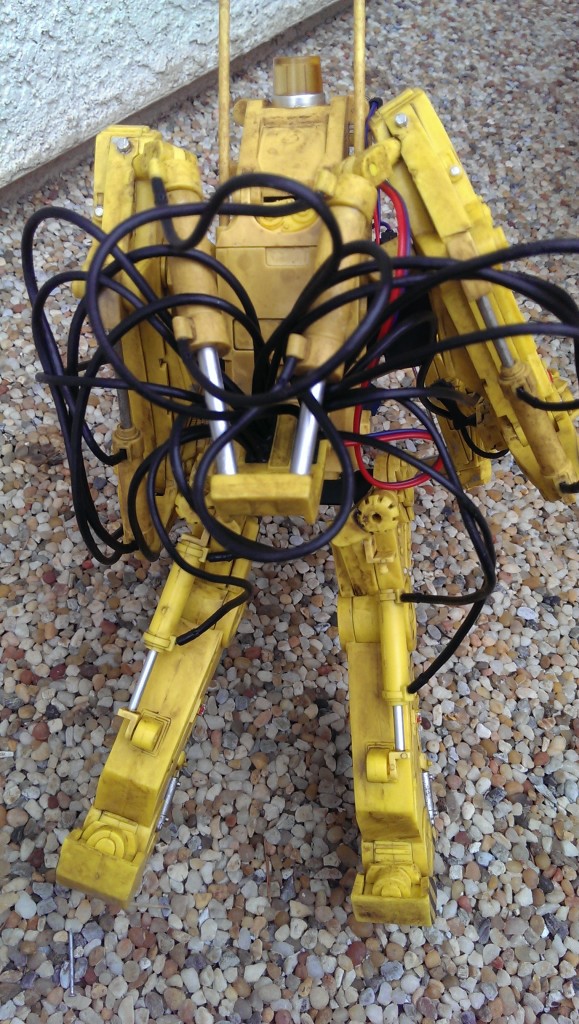