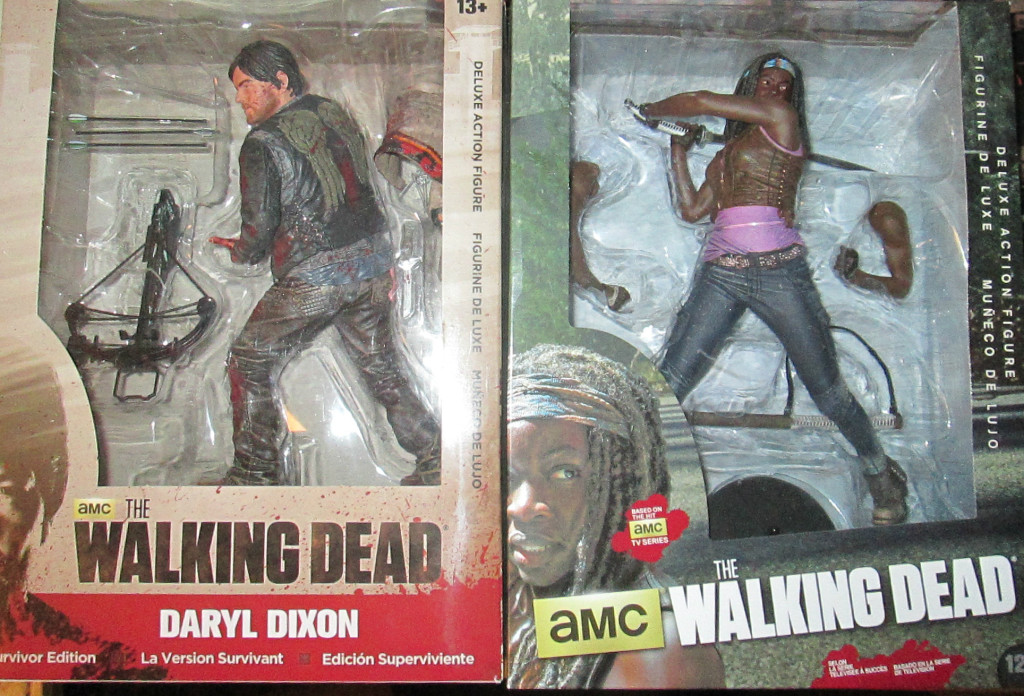 McFarlane’s Walking Dead figures are cool and all, and the construction sets make possible dioramas we never thought we’d see, but some of us prefer larger-scale, screen-accurate figures, with less emphasis on points of articulation that break up the sculpt (though if they can be done invisibly, great). With the 10″ line, Todd McFarlane is partially getting back to the kind of toy he used to be famous for – figures in which the “action” was implied in a dynamic pose rather than a feature or a cool joint, with some articulation just to steady the figure a bit.

McFarlane being McFarlane, he has also made them in a scale that isn’t really compatible with any other figures out there. This might be less of a noticeable issue if he’d make some zombies or bad guys, so we can make the fighting poses look good against a foe. I suspect one problem is that no particular zombie, other than maybe Zombie Merle, is iconic enough. Governor Philip, we may have missed the boat on, as every 10-inch character so far – Rick, Daryl, Michonne – is still alive on the show. 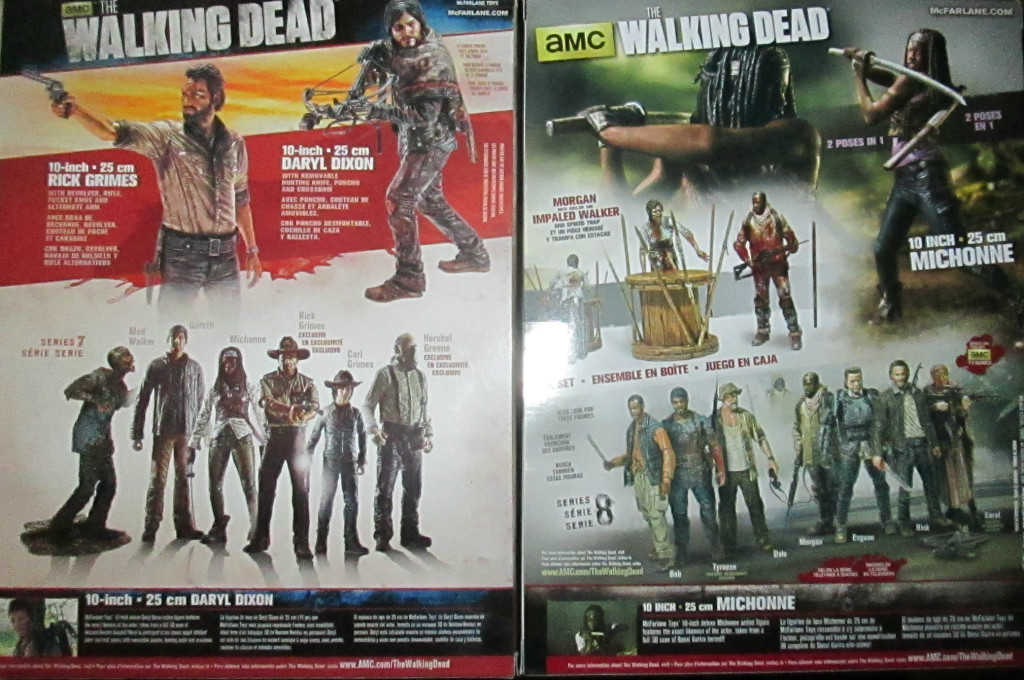 Those boxes have a lot of empty space in them. The figures are held in by translucent plastic twist-ties, which function like the metal ones except that you can’t unbend them – just untangle them. It’s not that hard.

She is articulated at the wrists and ankles only. Daryl has a neck cut-joint, and his head pops off to put the poncho on. His shoulders and wrists also have cut joints, and one of his ankles barely moves. The crossbow has removable arrows. 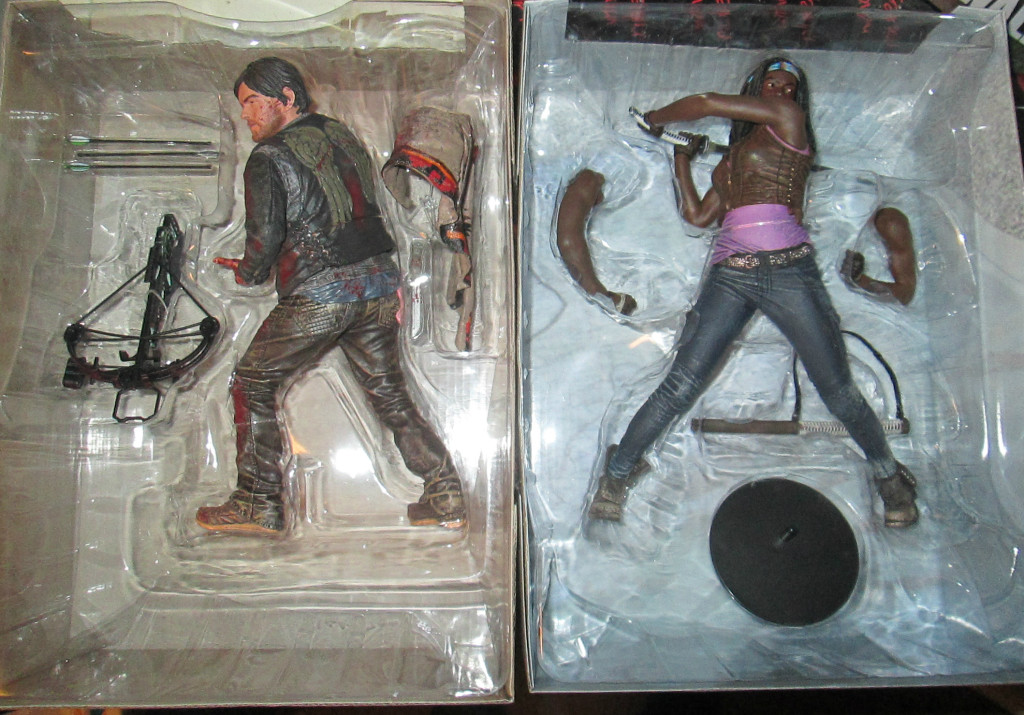 Daryl is the same sculpt as the previous release, but now he’s a “Survivor Edition,” blood-soaked and bruised. If you’ve waited to buy him, this is the better version, and certainly the more McFarlane-y. Maybe a bloody Michonne could be next.

If she is, I hope they’ll fix an issue with her sword – the way she is packaged, the hilt of the katana is bent into a curve. Her wrists are somewhat ball-jointed and can minimize this effect, but the packaging really does make it look bad at first.

She also cannot stand unassisted, despite slight ball-joints in her ankles. Unlike Daryl, however, who is precarious and unaided, Michonne has a stand, but even with it, her stance looks wonky. 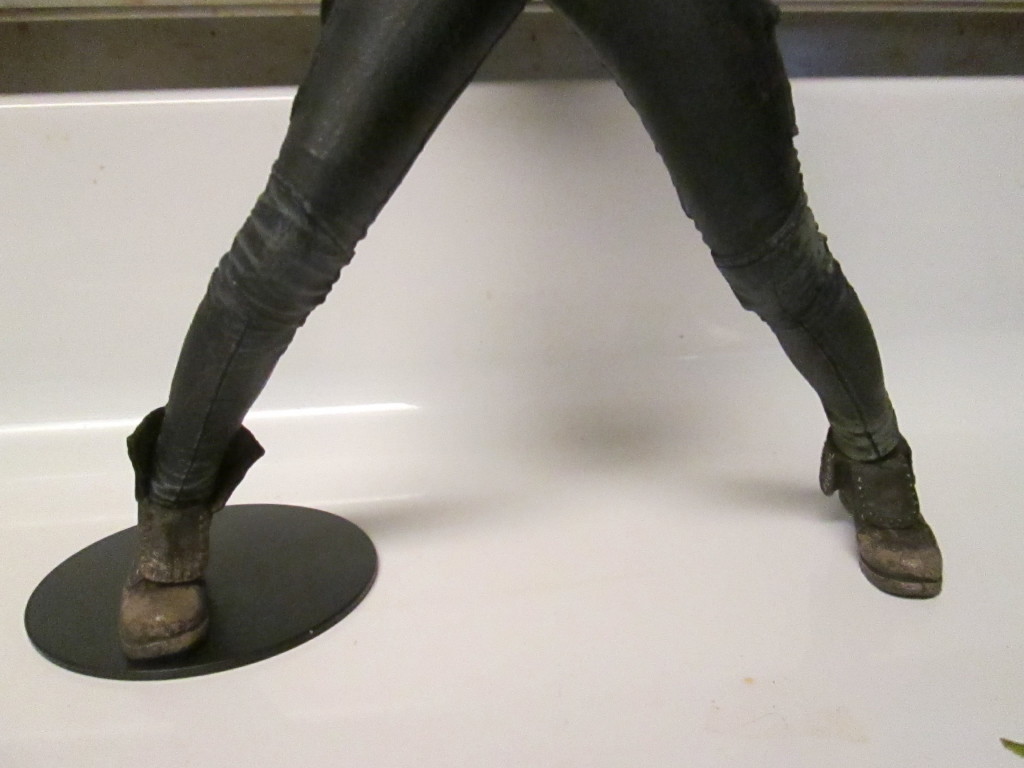 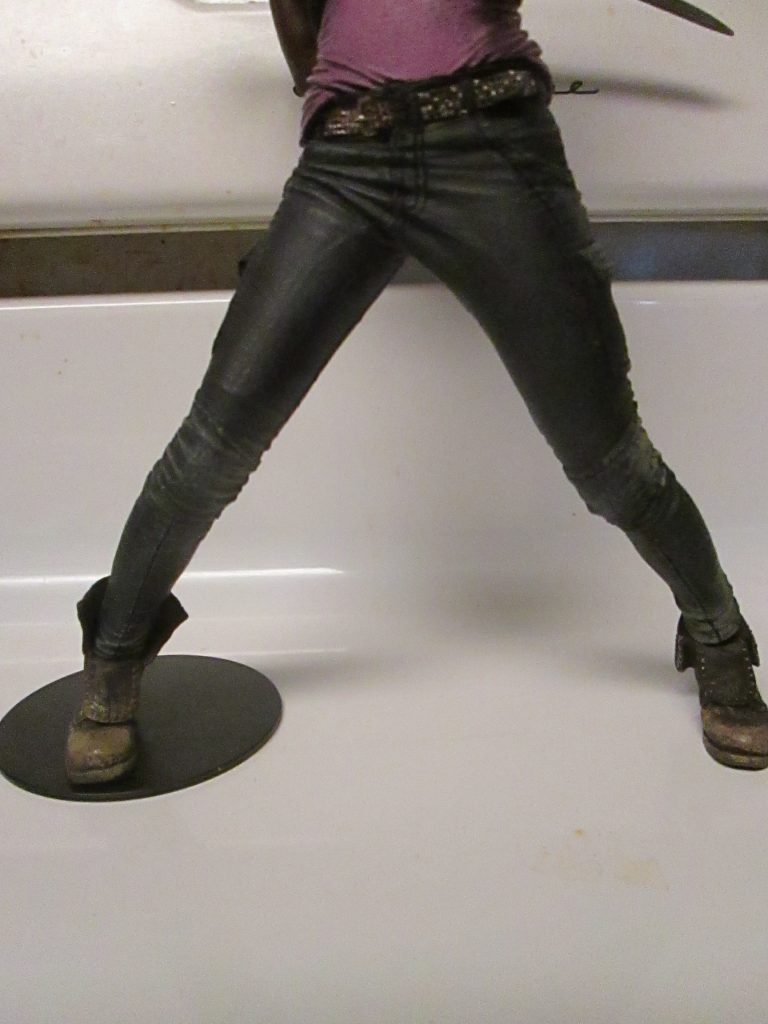 Daryl looks like he’s been through a dirty fight – and you will too, trying to get his crossbow into his stiff hand. In both cases, I suggest the use of hot water to loosen things up.

He balances, but barely – I would not suggest putting him on a top shelf.

Likenesses are generally good – Norman Reedus seems like a tough one to capture, as from some angles the sculpt looks dead on, and others, it seems like someone else. Danai Gurira has been given bloodshot eyes like she’s literally seeing red, but it’s pretty spot-on. 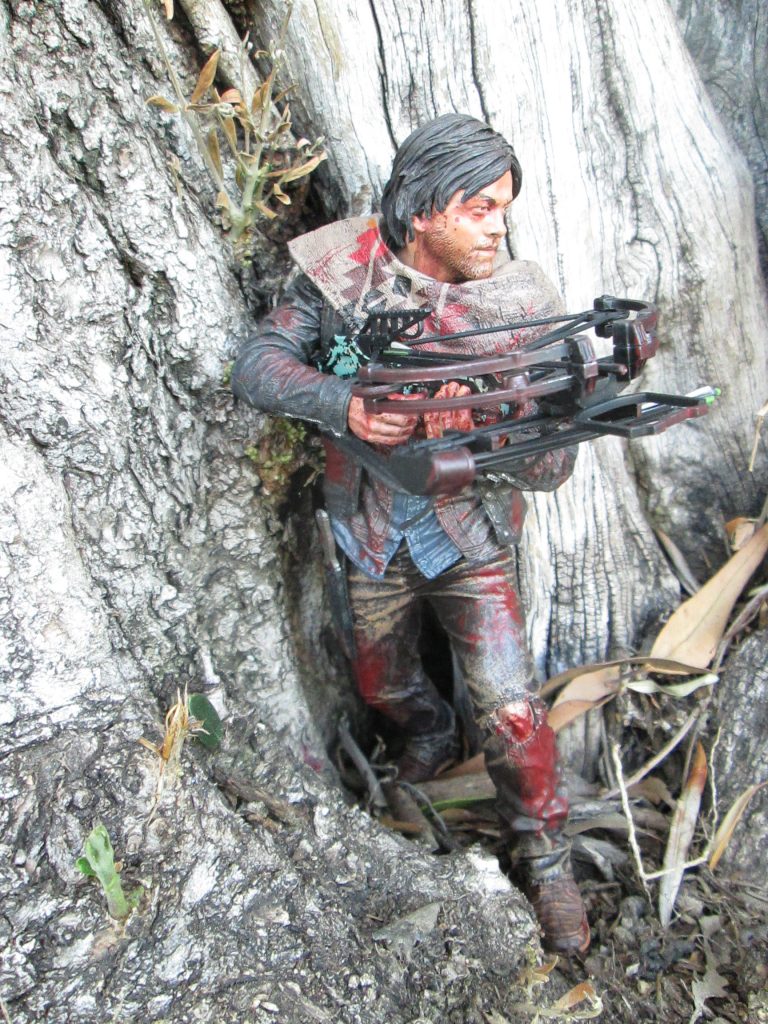 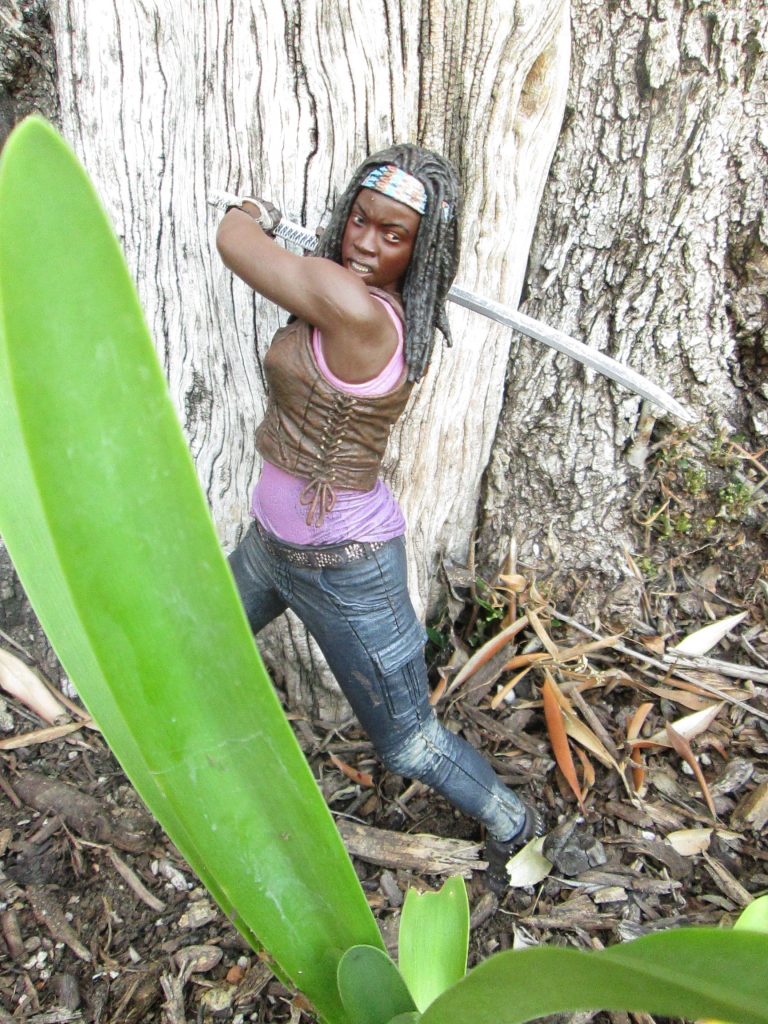 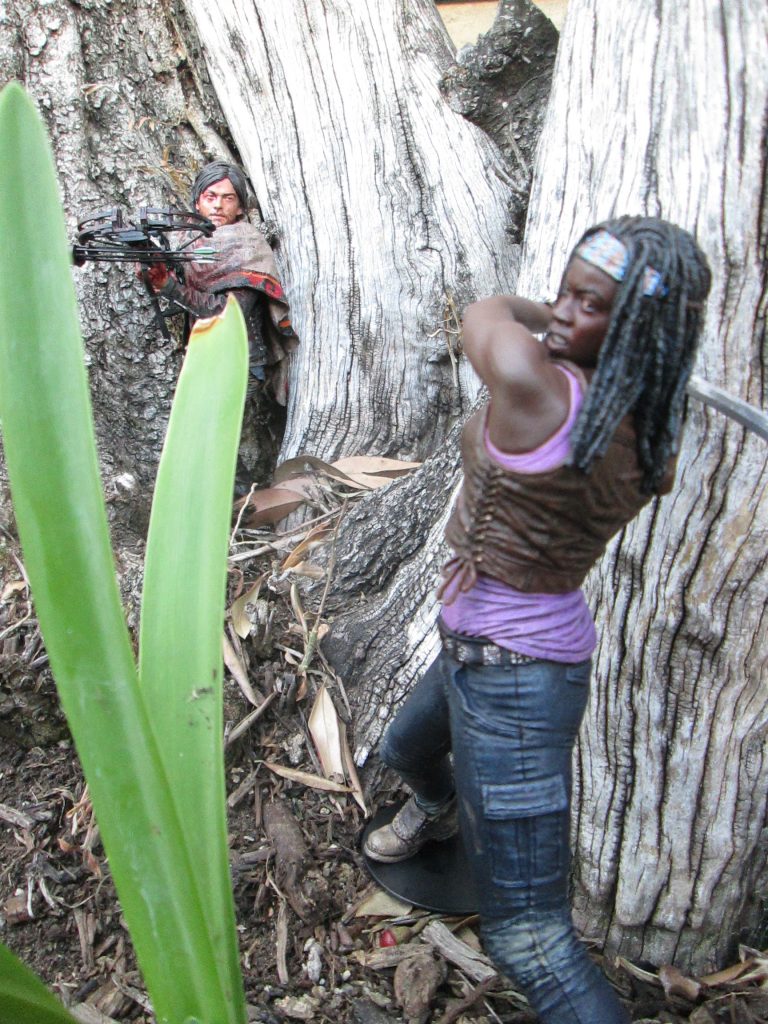 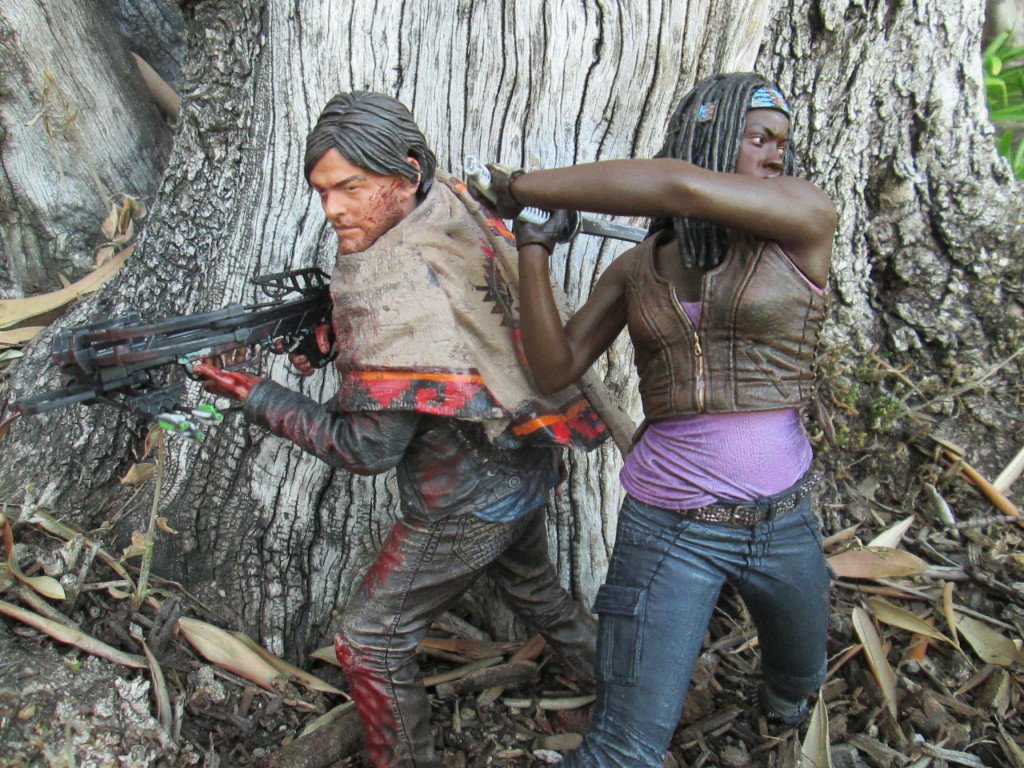 Michonne also has interchangeable arms – one set for defense and one for attack. Since the sword fits very tightly in her hands, I suggest picking a favorite pose upfront and sticking with it. 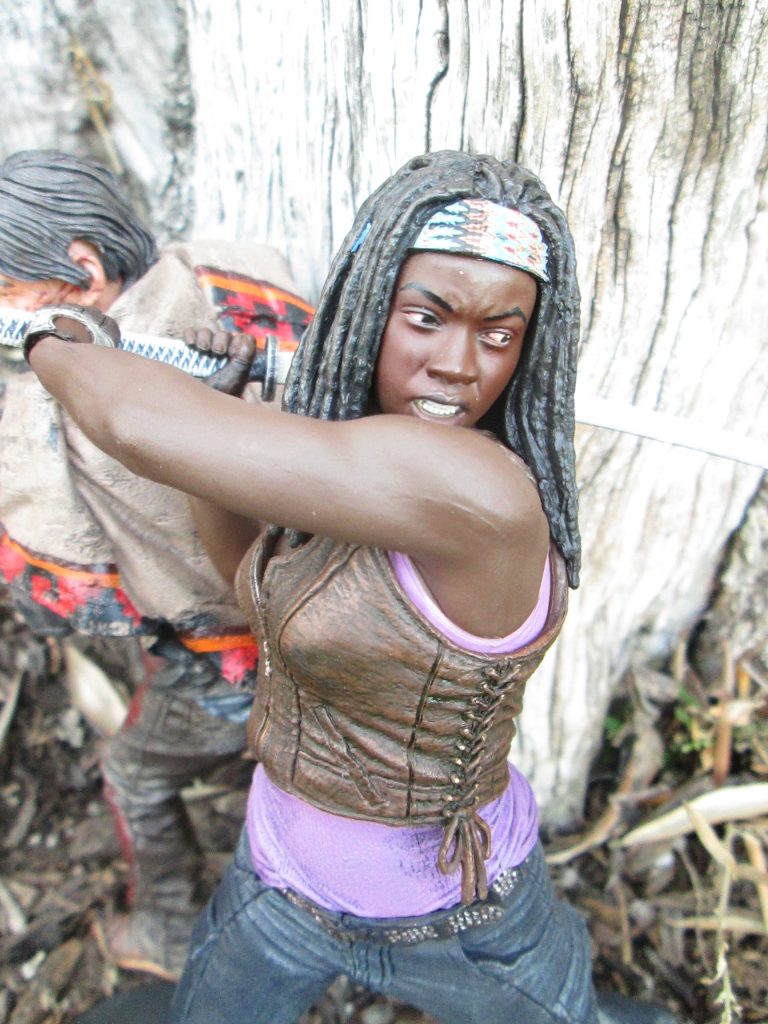 Of course, you can mix and match. If they ever make extra weapons, this one could be fun: 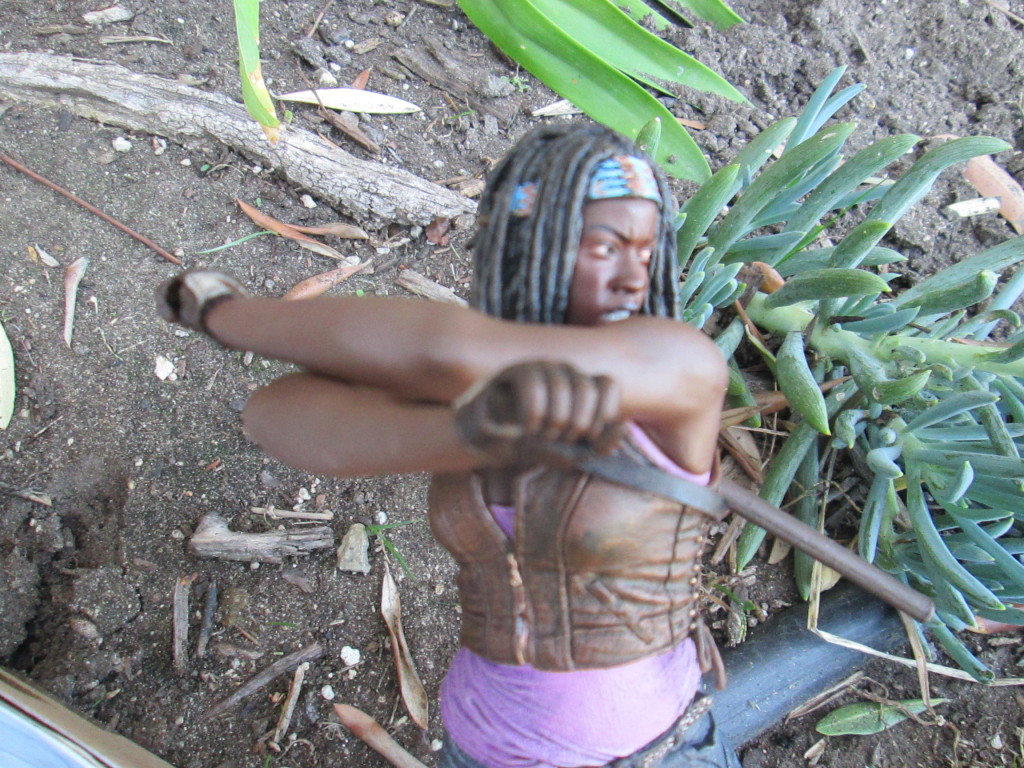 With the others, she can do the Worm… 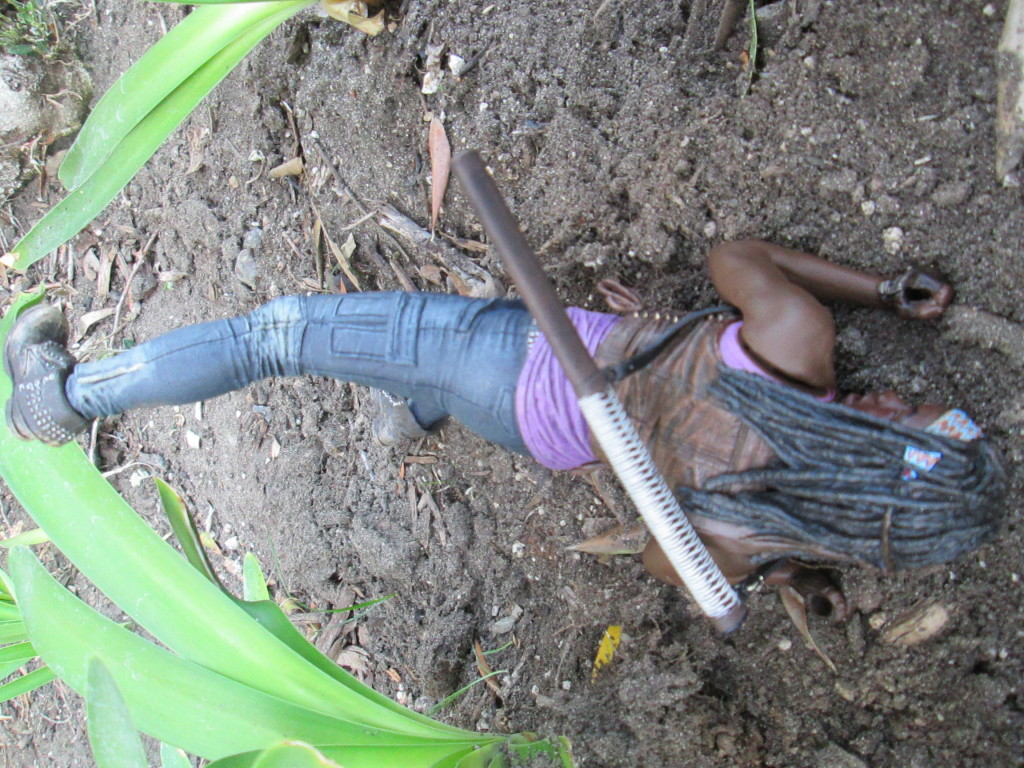 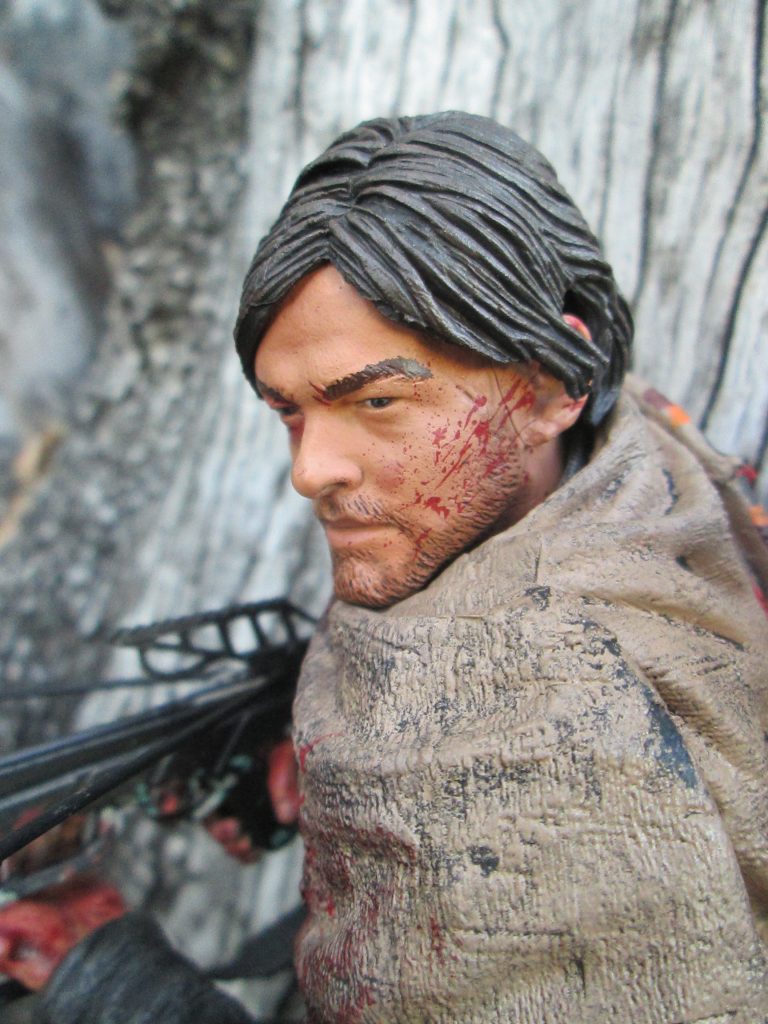 I said before that 10-inchers weren’t to scale with anything else, but that isn’t quite true. McFarlane doesn;t use fractional scale like most other companies – 1/6 scale, 1/12 scale, etc. He goes by how many inches the figure actually is. That being said, I have at least one McFarlane 12-incher who’ll do quite well.

There, in the trees… 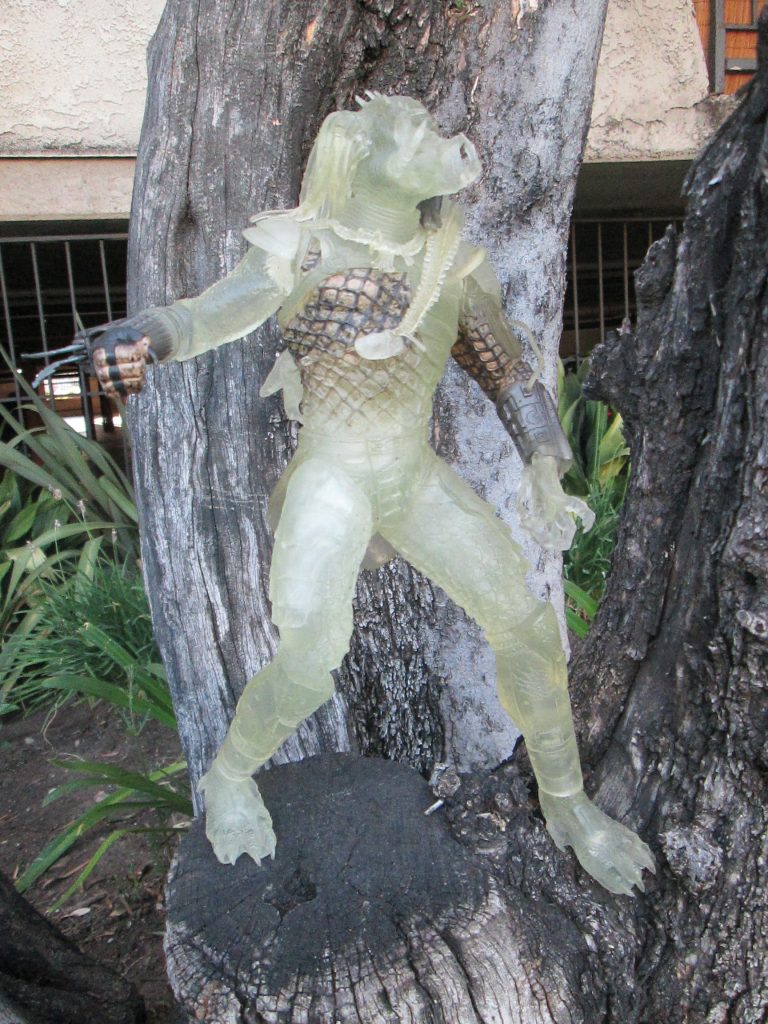 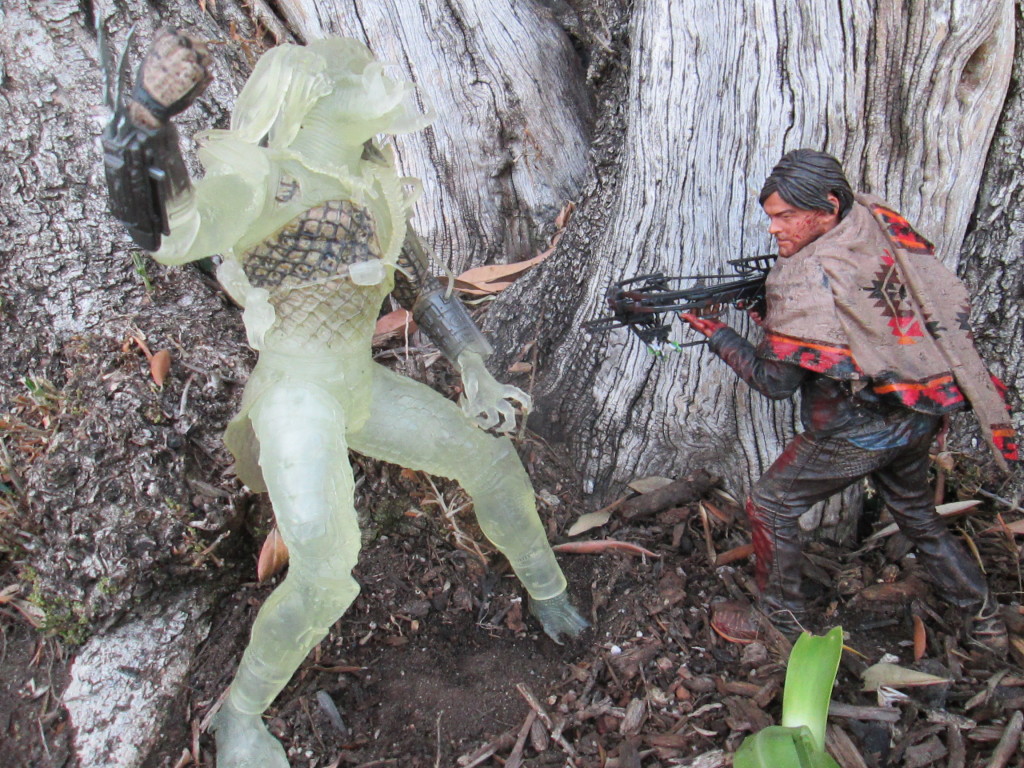 Anyone for alien sushi? 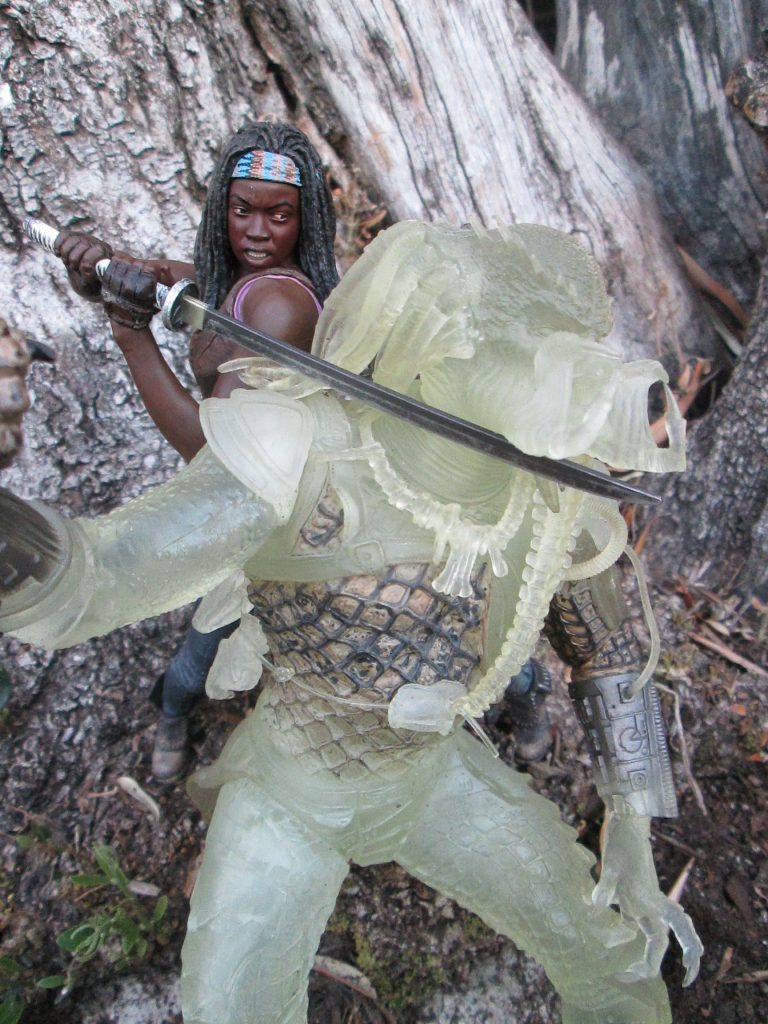 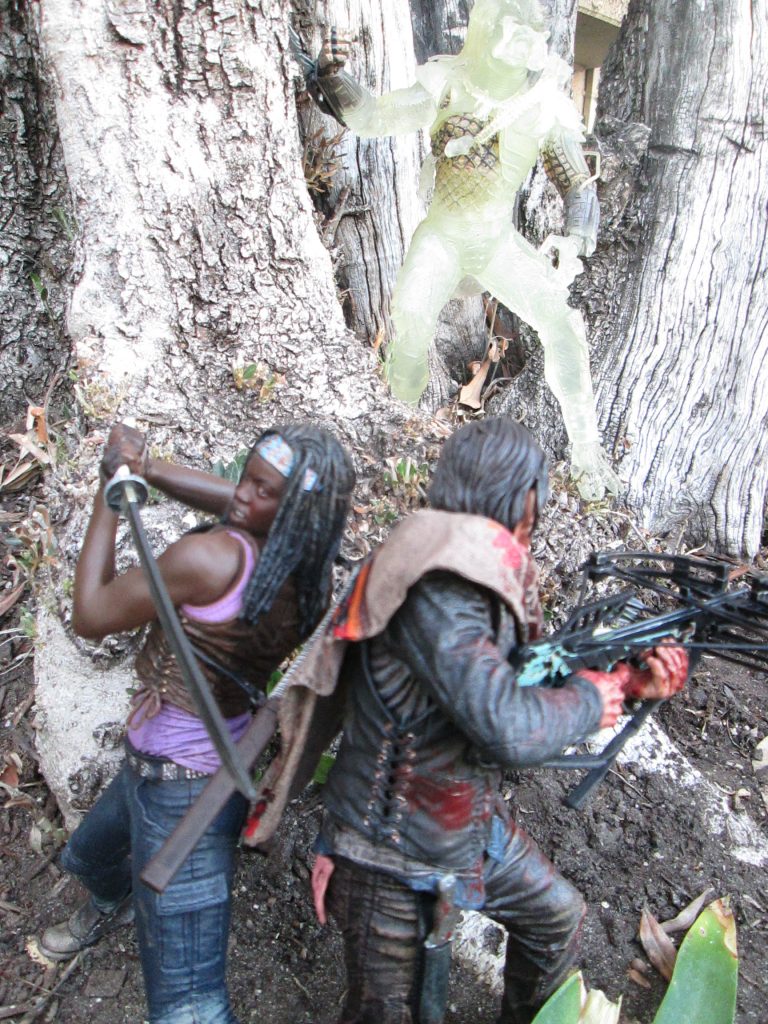 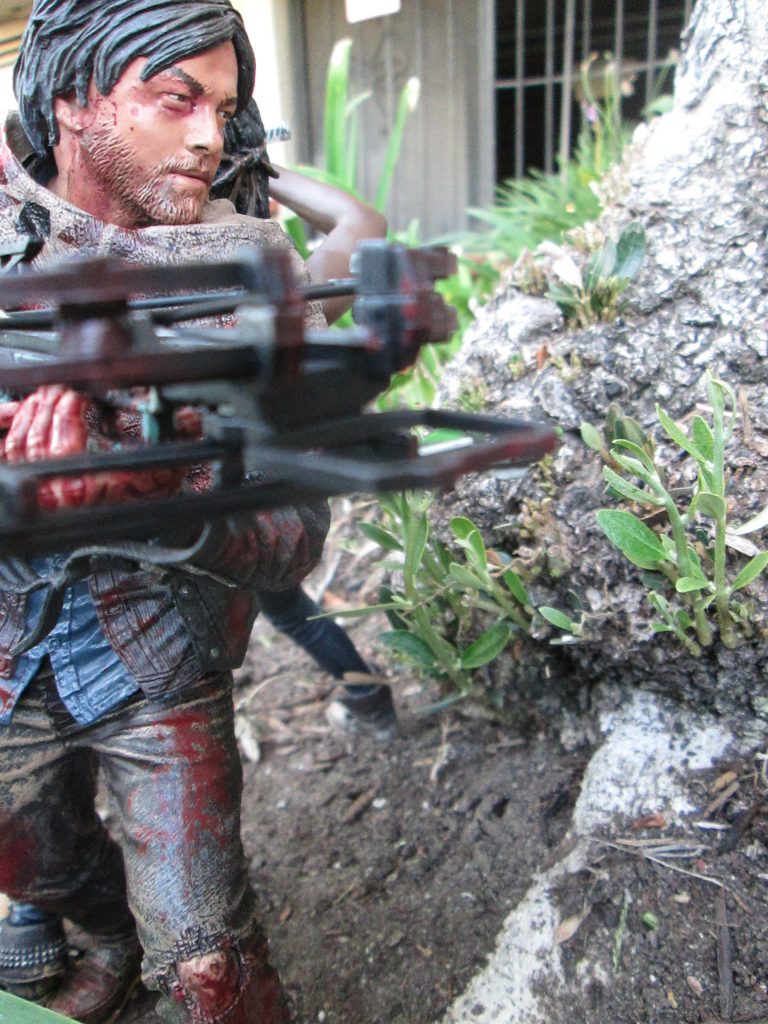 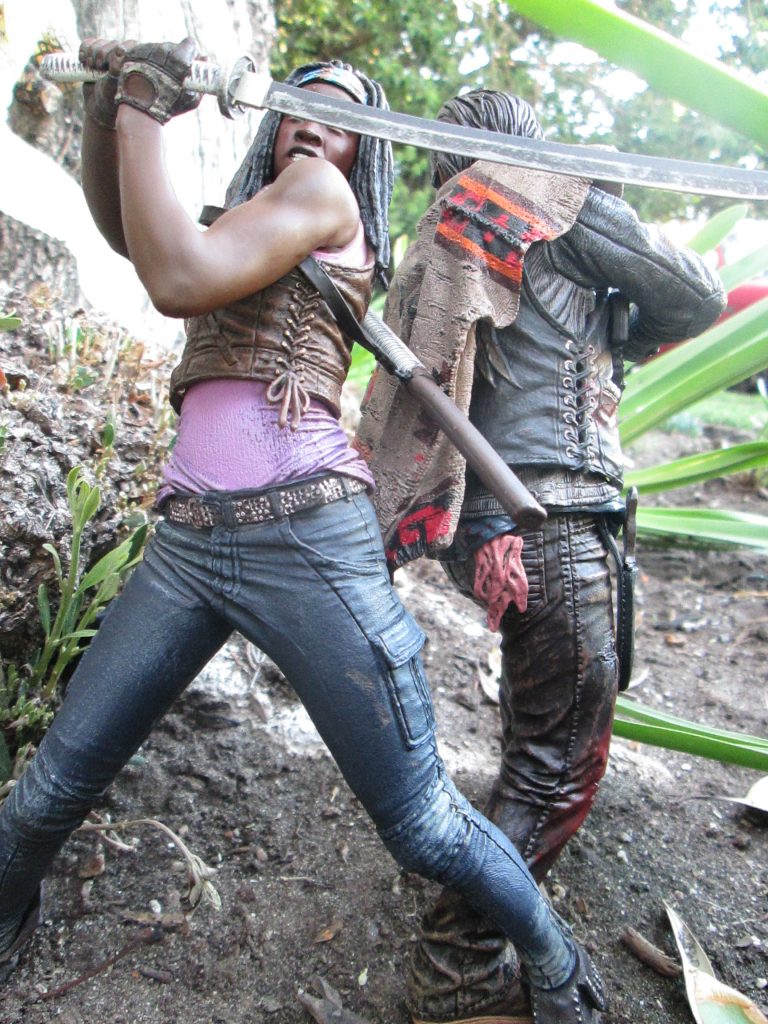 Michonne is unfortunately not to scale with the Blu-ray box of floating heads, which would work better for 12-inchers. Alas. 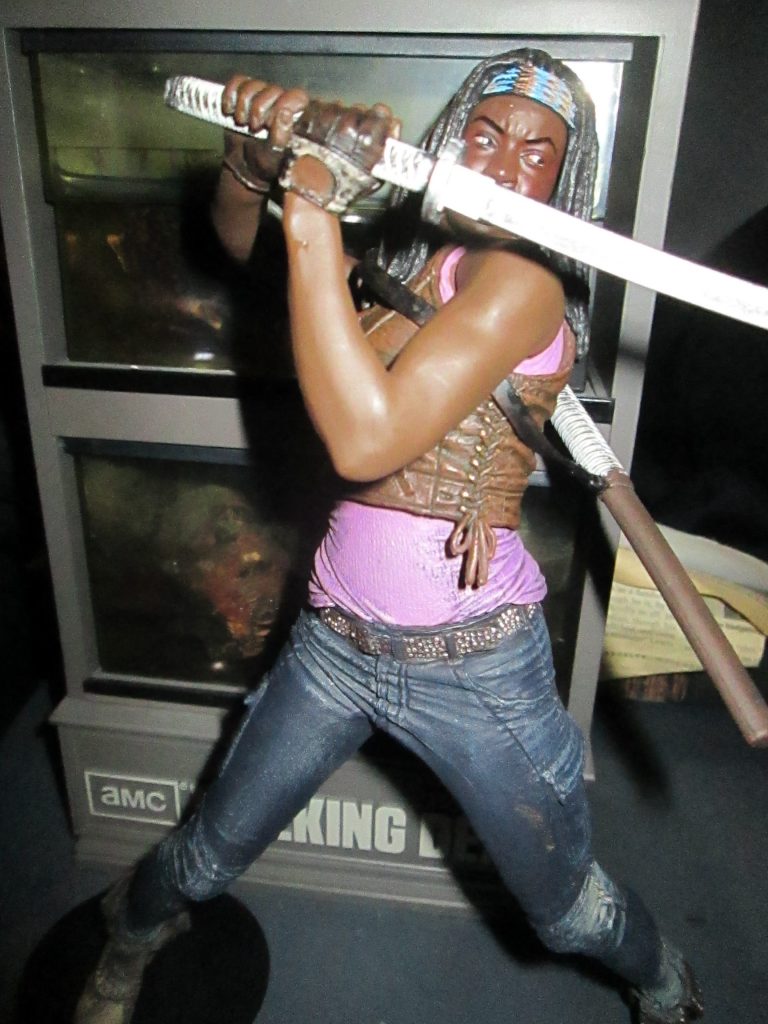 I would love to see diorama-ish bases for these guys, to really give it the old McFarlane feel in full. I guess that’s what the building sets are for now.

Failing that, Michonne’s old pets would be fun to have. And they could laugh at the fact that now her arms come off too.