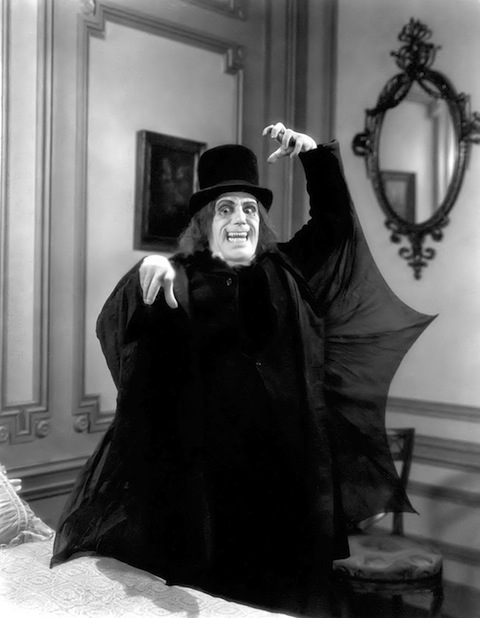 The intro to this list should, I suppose, be one big “spoiler alert.” The monsters here are all fakes, not in the way that movie monsters are always fakes, but in the context of the movie’s own reality. It’s the grand tradition of the original vintages of Scooby-Doo: The monster is revealed at the end to be a mechanical puppet or a person in costume, trying to scare off the other characters for any of a number of reasons, though greed is a big favorite.

So in the spirit of dressing up for Halloween, here are some of the classic fraudulent movie monsters. But if you’ve never seen…well, come to think of it, I can’t even list the titles to alert you to the spoilers that are coming. Indeed, it occurs to me that if you’ve never seen Scooby-Doo and were planning on binge-watching it for Halloween this year, I’ve even spoiled that for you. My bad.

Universal Studios arguably invented the authentically supernatural monster movie, with Tod Browning’s Dracula in 1931, though it’s possible that if Browning had had his way, his Drac would have turned out to be a fake. We’ll get to that in a little while. The subject at hand is this 1946 creeper from Universal, in which savage murders are occurring near the home of poor little rich girl June Lockhart, decades before Lost in Space, who suspects she may be moonlighting as the ferocious She-Wolf. “BEAUTY OR BEAST? WOMAN OR MONSTER?” the trailer rhetorically asks us, as if these are mutually exclusive possibilities.

It turns out [SPOILER ALERT!] that she’s not a rampaging lycanthrope at all. The real culprit is indeed a she, but only a figuratively a wolf: A nasty housekeeper trying to drive poor Joan crazy.

This atmospheric hour-long chiller has no relation, by the way, to the syndicated TV show from the early ‘90s of the same title. Nor to Ilsa, She-Wolf of the SS.

Here’s another pseudo-monster from Universal. Indeed, this one was written and directed by no less than Curt Siodmak, who wrote the original version of The Wolf Man in 1941. Siodmak was not at the top of his form with 1956’s Curucu, Beast of the Amazon. But hey, at least he actually got to shoot it on location in Brazil.

The title character (pronounced Koo-ROO-Koo), a hideous, murderous bird-creature, bedevils an expedition in search of one of those miraculously medicinal plants that reputedly grow like weeds in remote jungles. The fabulous Beverly Garland shows her acting chops by screaming in convincing terror at the sight of the laughable demonic avian. In fairness, though, while the bird suit is absurd looking, to be sure, there are monster flicks of the ‘50s and ‘60s with suits no more convincing that we were intended to take seriously. This one at least has the excuse that, as it turns out [SPOILER ALERT!], it’s supposed to be fake.

Yes, it’s just a costume worn by the expedition’s guide in order to scare off the white folks and preserve the indigenous culture, and his own chiefdom of same. It’s perhaps naïve of the fellow, however, to think that this would dissuade white people; nowadays rich scumbags might well pay thousands for the right to hunt and shoot a Curucu and mount it on their wall.

The fabled Himalayan “snowmen” aren’t generally associated with rural New York. But a hapless student expedition runs afoul of the hairy menace in a low-budget nasty called Shriek of the Mutilated (among other titles) from 1974, directed by sleazemaster Michael Findlay.

Fake Yeti were also plot points, by the way, in Doctor Who and the Abominable Snowmen and the Jonny Quest episode “Monster in the Monastery.”

7. The Ghost of Dragstrip Hollow

Hot-rodding, rock n’ roll teens hang out, party and dance at a creepy old mansion in this 1959 quickie from AIP, all in order to exorcise any purported spooks that may haunt the place. Lurking the halls there is indeed a monster that is scaly, fanged and, to late-show viewers of the period, very familiar.

The abomination in question was known, behind the scenes, as “Cuddles,” one of the signature creations of the great monster-maker Paul Blaisdell, who designed, built and often wore paint-and-foam rubber horrors for It! The Terror From Beyond Space, The Beast With a Million Eyes, The Day the World Ended, It Conquered the World and others such ‘50s faves. His work, hugely influential on the visual side of midcentury sci-fi, is stylistically unmistakable: The faces of his creatures blaze less with malevolence than with a certain cosmic irascibility that makes them lovable.

Cuddles was created for 1956’s The She Creature and was used again, with various minor alterations, in Voodoo Woman, How to Make a Monster and Teenage Caveman. But in Dragstrip Hollow, it turns out that [SPOILER ALERT!] the monster is a fake. When the mask is yanked off near the end of the flick, it’s revealed to be a horror movie actor (played by Blaisdell himself, speaking in an odd high-pitched voice) venting his frustration at being out of work.

There is a final twist to Dragstrip Hollow, however: It turns out [SPOILER ALERT!] that there is a real ghost in the mansion. But this spectre takes a powder, too, driven off by the rock n’ roll.

The Ghost of Dragstrip Hollow featured hot-rodders; it’s only fair to let the beach bums have their turn. The beach girls in 1965’s Beach Girls and the Monster are played, or so the trailer tells us, by “the glamorous Watusi Dancing Girls of Hollywood’s famed Whiskey A-Go-Go nightclub…”

The monster, on the other hand, isn’t so glamorous. The gilled, galled-looking creature doesn’t come across much more convincingly than the title characters from Sigmund and the Sea Monsters. And this is realistic, because as it turns out [SPOILER ALERT!] the monster isn’t a real monster at all. He is, rather, the kindly seeming scientist played by Jon Hall, in a corny monster suit, trying to get his son to quit hanging out with the beach party crowd and get serious about his career. He ought to have been more understanding: Hall (who also directed) was no stranger to the beach, having starred in such fare as South of Pago Pago and Aloma of the South Seas back in the ‘40s.

The movie has, it should be said, a pretty good surf-rock score by Frank Sinatra, Jr.