No, I don’t mean Nick Carter the Backstreet Boy and Dancing With the Stars hoofer. I mean Nick Carter the private detective and man of action, who debuted in New York Weekly in 1886. 18-freakin-’86: The year before the first Sherlock Holmes story was published. Eleven years before Dracula. Twenty-six years before Tarzan. Carter’s been around in one form or another ever since, but those forms have been very different. A production company called Golden Island Filmworks has recently announced its intention to launch a big screen franchise based on the Nick Carter: Killmaster series of “men’s novels” which started in 1964. Here are some other incarnations of this archetypical ass-kicker: 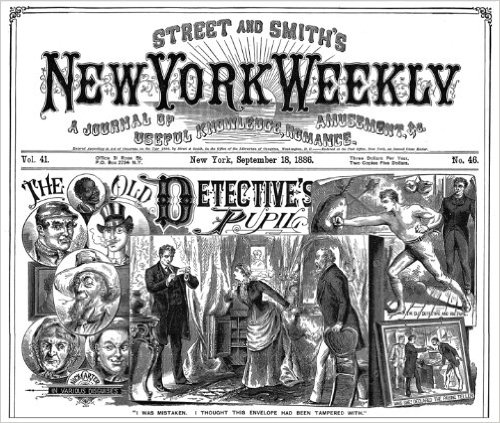 Attributed to John Russell Coryell, this first Nick Carter yarn, fully titled The Old Detective’s Pupil; Or, The Mysterious Crime of Madison Square, appeared in New York Weekly in 1886, and provided an origin story for our hero. It’s often been noted that it’s essentially the same origin as that of pulp icon Doc Savage, and probably not by coincidence. The Old Detective of the title is Sim Carter, who has rigorously trained his son and pupil Nick in all manner of physical and mental disciplines for a life pursuing the same profession.

When we first see Sim, his eyes are “resting with a gleam of delight on a young man in an adjoining room…And well might any lover of physical manhood rejoice at the sight before old Sim’s eyes. Stripped to the waist, his nether limbs cased in tights, stood a perfect athlete…The easy swing of the arms, the gently elastic movement of the lower limbs, and the alert, graceful carriage of the head told a story of complete development to the expert judge in such matters…No muscle was over-developed. Every muscle was in harmonious working with its fellows, and in consequence the graceful, handsome, inoffensive-looking young man was without peer. Giants were like children in his grasp. He could fell an ox with one blow of his small, compact fist.”

It isn’t just physical prowess at young Nick’s command, however: “His gray eye had, like an Indian’s, been trained to take in the minutest details, while his memory was trained to keep such details fresh for use. His rich, full voice could run the gamut of sounds, from an old woman’s broken, querulous squeak to the deep, hoarse notes of a burly ruffian. And his handsome face could, in an instant, be distorted into any of a hundred types of unrecognizable ugliness.”

In short, he’s got some mad skills.

In this first adventure, he searches for a rich Manhattan banker’s missing daughter, Mabel Livingston, and in the course of the story soon finds himself bereft of his father and mentor. “Waking or sleeping, night or day, I will not rest until the brain that planned it and the hand that did it perish,” he vows over the slain Sim.

Thus begins a career that would carry on through countless bizarre adventures across countless pulp publications for next century. If this is your cup of tea, or if you just enjoy descriptions of muscular men, this and many other Nick Carter tales can be had inexpensively on Kindle.

Walter Pidgeon played Nick Carter in three MGM features, the first being this 1939 thriller director by Jacques Tourneur, better known for directing the classic Val Lewton-produced thrillers at RKO, like The Cat People and I Walked With a Zombie. Pidgeon’s Carter comes across in the style fashionable for detectives at the time: impeccably dressed, dapper, debonair. But the series didn’t seem to catch on the way The Thin Man, Ellery Queen or Perry Mason flicks of the era did.

The case in Nick Carter, Master Detective involves intrigue at an aircraft factory. As the boss notes to Carter, of an airplane engine for whose safety he fears: “There she is…That’s the one they’re after. I can name you two governments who’d give a million dollars for her just the way she stands.”

Both governments, presumably, are under the control of Dr. Evil.

3. Nick Carter, Master of the Airwaves

The Master Detective had a much longer career in midcentury radio drama than he’s had (so far, that is) in Hollywood movies. He was heard, in the smooth baritone of Lon Clark, from 1943 to 1955 on the Mutual network. Originally titled The Return of Nick Carter (obviously only one of many returns the character has had) but later retitled Nick Carter, Master Detective, the show features two-fisted action as well as the gadgetry that has been an ongoing feature of the franchise.

For example, in “Professor’s Secret,” broadcast on April Fool’s Day, 1944, dirty lowdown crooks kidnap a kindly professor and his daughter, because they want the “Healing Ray” he’s invented. They want it, they admit, to patch up bullet wounds sustained in committing crimes. It doesn’t seem to occur to them that there might be a better way to monetize such a device.

These episodes, many of which are available online, are a pretty amusing, even addictive, way to spend a half-hour of your time. They’re energetically performed and so full of classic radio-drama tropes that they seem, retroactively, almost like a parody of the form.

There was, by the way, a spin-off show about Nick’s son Chick Carter on Mutual for a couple of years in the early ‘40s. Chick also made it to the movies as an adult character, played by Lyle Talbot, in the 1946 Columbia serial Chick Carter, Detective. Presumably the title reflects that he isn’t in the category of “Master Detective” like the old man. Or, put another way, that he isn’t a Chick off the old block. 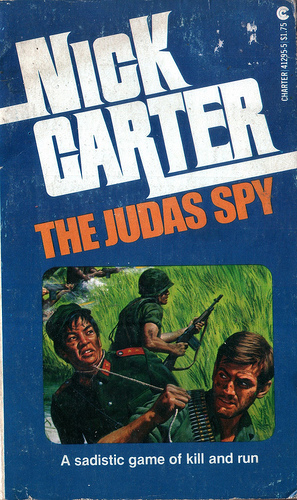 The version of Nick Carter that Golden Island Filmworks hopes to revive is “The Killmaster,” also known as N3, agent of AXE, a division of the U.S. intelligence service even scarier than the CIA. Like earlier versions of the character, he’s good at everything you and I aren’t. He’s a perfect physical specimen, of course, thanks to “a regimen worthy of an Olympic athlete.” He’s also an expert in many styles of hand-to-hand combat as well as many weapons, a master of disguise, a polyglot, and a major babe magnet. His real affection, however, seems to be for his weapons and other gadgets, which he has a habit of naming: He calls his gun Wilhelmina, and his knife Hugo.

Debuting in 1964 with Run, Spy, Run, the series ran all right, to well over two hundred titles before ending in 1990. The Killmaster books were one of a number of sex-and-violence-rich “men’s fiction” series that arose in the ’60s and ’70s, along with Matt Helm, Mack Bolan, Remo Williams and others, obviously meant as American answers to James Bond (my own favorite of this sort is Frank McAuliffe’s too-little-known series about wry, deadpan professional assassin Augustus Mandrell).

One gimmick with the Killmaster tomes was that they were published without author attribution, maybe with the idea that Carter was telling his own stories. They were actually written by many different hands, ranging from Michael Avallone to Martin Cruz Smith. I picked one up, 1968’s The Judas Spy (33rd in the series), at a used bookstore, simply because it had a title similar to The Judas Conspiracy, which has been announced as the title for the upcoming Killmaster project.

I don’t think The Judas Spy, set in Indonesia, is the basis for the plot of the proposed film, but it does feature Nick Carter’s recurring nemesis, the scarred, hook-handed Mr. Judas, “blessed with a brilliant brain and the body of a rabid weasel,” and his vile henchmen, among them pederast ex-Nazi Muller. Nick’s major love interest here is local cutie Tala (per the back cover, “too beautiful to resist and too dangerous to trust!”), but he also proves irresistible to a female orangutan that he names Mabel. A nod to the missing woman in The Old Detective’s Pupil, perhaps?

If you can stand wall-to-wall sexism, cultural condescension and casually-tossed-around racial and ethnic slurs, this artifact is a riotous read. It dutifully serves up a dose of homophobia, too: On the very first page Nick, noting the soft voice of the young Indonesian guide with whom he’s sharing a mini-sub, worries that he might end up “lost on a hostile shore with a gay first mate.” A little later it’s noted that the young man chauffeuring him “wore a hibiscus behind one ear, but he drove carefully and well.”

That’s surprising, because, as any international man of action knows, hibiscus-wearers are normally notorious menaces behind the wheel. 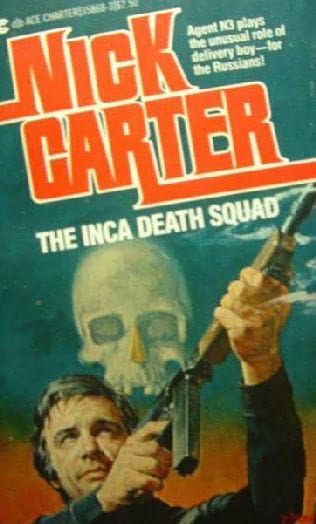 My second tour of duty with the Killmaster was The Inca Death Squad. I chose this 1972 adventure for two reasons. First, it had a seriously cool title. Second, it was one of the Nick Carter titles reportedly ghostwritten by Martin Cruz Smith, and I enjoyed Gorky Park.

It’s just as dutifully lewd and imperialist as The Judas Spy, but it’s better-written, faster-paced and more freewheelingly preposterous. In chapter one Nick is coolly rebuffed by a blond lady doctor; in chapter two she changes her mind and they get it on atop his desk. The rest of the story bounces him around Chile as bodyguard for a loathsome Soviet bigwig.

But he still finds time for a ménage a trios with beautiful Cuban sisters Rosa and Bonita. One’s a flamenco dancer (she tells Nick he’s “…the first man I have ever wanted to dance for desnuda”) while the other is a singer (“If you are as talented as I hear you are, maybe you will make me sing something beautiful.”). All in a day’s work.