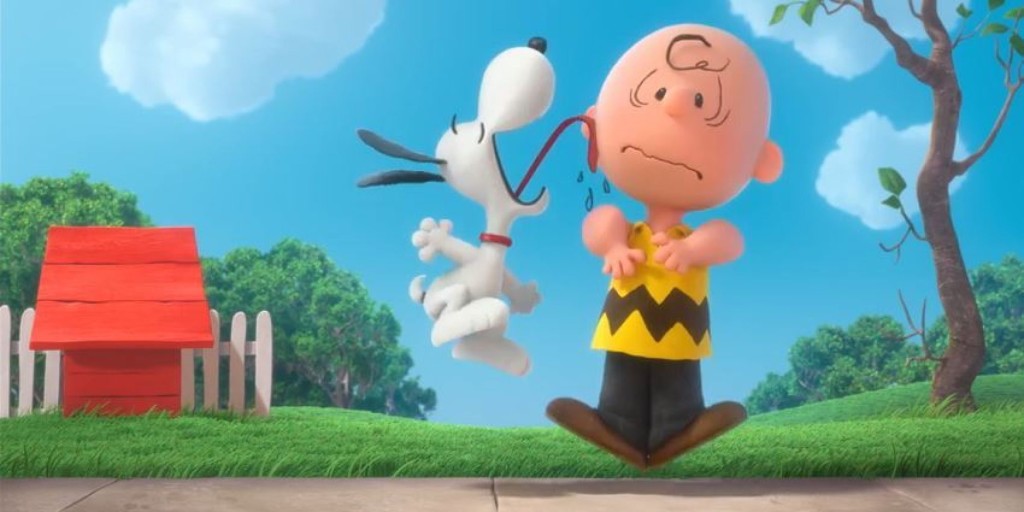 The most important thing to know about The Peanuts Movie is that the trailers do not lie. The movie they are selling is very much the movie you will see. And see it you will, at some point in your life, at least in part, because I’m not sure there’s a family in America with a TV that won’t be owning it eventually. Appropriate for all ages, yet still acceptably funny for adults who have nominally grown out of admitting they ever liked Snoopy and the gang, this Peanuts is as big a winner as its protagonist Charlie Brown isn’t.

Although…one caveat there. It really isn’t a spoiler to say that no feature-length American animated feature aimed at kids can quite get away with a depressing ending, so it’s possible that the hardcore fan may not find that young Master Brown suffers enough. The film even goes so far as to have one character actually spell out how great Charlie Brown’s selflessness is, because the filmmakers don’t necessarily trust kids to get it from all the examples they’ve been shown throughout. It’s not a ruinous moment, but for any viewers older than the onscreen characters, it’s redundant.

Storywise, this is something of a greatest hits collection: Charlie Brown strikes out at baseball, Snoopy finds a typewriter and composes a book about fighting the Red Baron, Lucy gives out cynical advice for a nickel, Linus mentions the Great Pumpkin, grown-ups go “Wahh-wahh!”, Lucy goads Charlie Brown into kicking the football, and so on. The loose central thread involves the arrival in the neighborhood of the eternally pined-over little red-haired girl, and Charlie Brown’s attempts to impress her while simultaneously being terrified of having her even look his way. No needless modernization occurs – there are no video games or cell phones, Snoopy does not fart, and there aren’t any obvious references to other movies. Yes, there are two pop songs – the Flo Rida number heard in the trailer, and a Meghan Trainor tune recorded for the movie – but they’re heard at appropriate moments: the former during a time-lapse montage, and the latter at a school dance. Fans of the classic jazzy score need not worry, as it is abundant.

Style-wise, we’re talking a whole new ballgame. Using CG and 3D, the characters now have depth and weight, but their facial expressions retain the feeling of Charles Schulz’s pencil-work, and in certain flashback and fantasy sequences, black-and-white 2D recreations of the original strips are given new life in motion. During one particular Snoopy/Red Baron sequence, we even see love-hearts colored in not-quite between the lines, lending a handmade sense to something that has almost certainly never been physically touched by fingers. For the full-on Red Baron flights of fantasy, the animators add more details than ever, with elaborately rendered planes, hangars and scenery, implying that Snoopy’s imagination is more vivid than anything in reality. Adult fans are more likely to question this choice than kids are; furthermore, the attempt to directly parallel Snoopy’s fantasy of saving French poodle Fifi with Charlie Brown’s quest for love doesn’t work as well thematically as writers Craig Schulz, Bryan Schulz (Charles’ son and grandson, respectively) and Cornelius Uliano seem to think it does. Still, if the movie were completely perfect, it wouldn’t be totally true to Charlie Brown’s spirit anyway, right?

It’s so hard to make timeless movies for kids these days that most don’t even try – even Paddington Bear had to have frenetic action sequences and gross-out jokes inserted into his reboot for fear the slower, calmer tone of the books wouldn’t play, and The Smurfs absolutely epitomizes what’s wrong with this approach in its single worst moment, when the characters play Guitar Hero and sing their own theme song to the tune of “Walk This Way.” The Peanuts Movie, by contrast, does not care that rotary dial phones with curly cords might as well be antiques to its target audience, and deals in the more universal truths of childhood: awkwardness, rejection, imagination, slapstick comedy and friendship, with the occasional adult references to stock portfolios and mortgages that the kids use to sound smart even though they don’t fully understand them. One thing folks of my generation may notice, more than ever, is just how much South Park owes to the Peanuts gang – what is Cartman if not a grotesque exaggeration of Lucy Van Pelt, and how many South Park movie fans will think of Stan and Wendy when watching Charlie Brown trying to interact with his would-be lady love?

I’m cynical enough as a viewer that Pixar movies are starting to bother me – I feel and sense the designed-by-committee emotional manipulation more often than not, and it grates, even when it works. Peanuts is just as calculated to be a merchandising juggernaut, but it feels natural and true to the spirit of the source. Mindful of how director Steve Martino made one of the few faithful Dr. Seuss adaptations with Horton Hears a Who, the Schulz family chose him to safeguard their legacy, and working hand-in-hand with them, he has done “Sparky” proud.

P.S. My wife says that if you don’t like it, you all are heartless wieners.