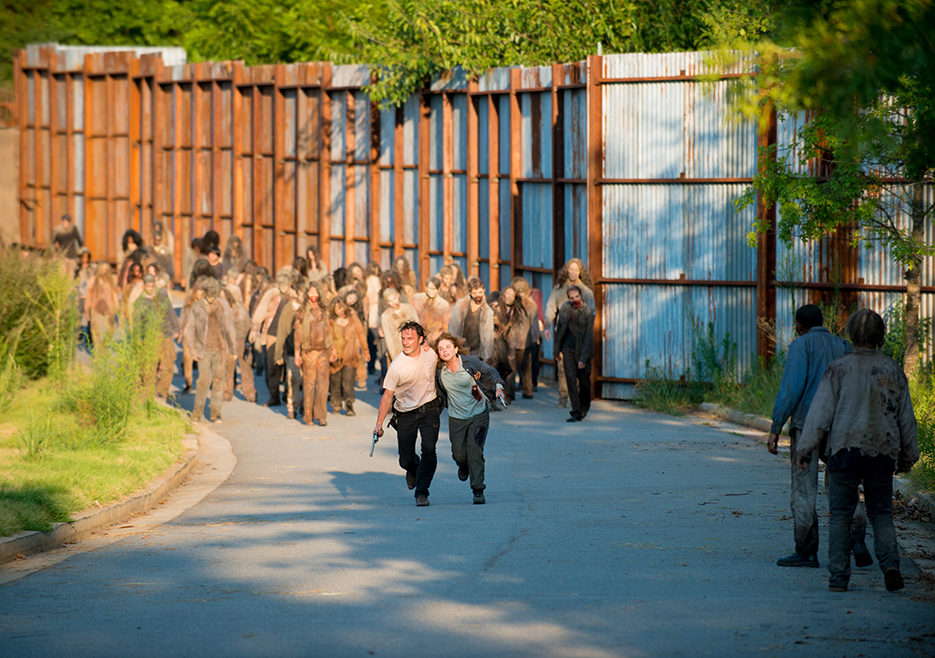 The late Tiny Tim could never have imagined this kind of exposure.

–Into the Badlands is at ten. So thankfully for my fingertips, this will not be an overlong episode.

-HOLY SHIT is that seriously Tiny Tim? HOLY SHIT did that kid really eat most of his vegetables?

-Minimates survive the apocalypse! I knew it.

-Ants make a good optical illusion. Sometimes they look like they’re going up; other times down.

-REALLY, kid? You’re wasting cookies in the apocalypse? Carol was right to threaten you.

-As I see the tower collapse again, I wonder how much money they have saved this season by having multiple cameras on the same staged events, reusing every single angle in each different-perspective episode.

-Rick totally wasting bullets against a horde. Deanna’s aim is so bad she’d be better off handing the gun to Rick and letting him double-fist.

-Badass Carol trips like a clumsy goof. This allows her and Morgan to briefly bond, and I’m sure that totally won’t be important later.

-Oooh. Shouldn’t have left that totally exposed circular saw out there. Oh well.

-Zombies have, thankfully, not learned to climb ladders.

-Green balloons in the air briefly form an arrow, like an in-game direction.

-Eugene, once again completely ineffective and making us all wonder how he’s not dead yet.

-Run in the house! As we focus on the metal porch sculpture for no reason!

-Pull back to show Alexandria being overrun, and the dead not entirely looking like CGI.

–The Mortal Instruments is going to be a TV show now? If that question even makes sense to you, I guess you’re the reason why.

-Wait. “Mid-season finale of Talking Dead”? BWAHAHAHAHAHA. Said as if somebody out there is all, like, “Will tonight’s Talking Dead leave me hanging?”

-Enid hails from the soap-opera school of acting where leaving your mouth open slightly is meant to make you look profound.

-Tiny Tim still? This kid has odd tastes and a unique record player.

-“pretend you’re somebody who’s not scared.” Good idea. HOW?

-Morgan dead-last on the list of people Carol trusts? I get the hyperbole, but that can’t be true.

-Honestly, what’s the worst that can happen from a concussion in this situation? Even if she goes full-Benoit?

-The W tattoo dude reminds me of “Kyler” from Beavis and Butt-head. I hope he has a tattoo of a butt with a butt-shaped mark on it.

-BLEURGH! Gross wound, and yes, it does look infected. Burn that shit.

-“You’re on the wrong track, baby, you weren’t born this way!”

-D’oh! Zombie bite on Deanna. I guess we know who tonight’s Talking Dead “mystery guest” is now. “Well, shit” is the perfect response into a commercial break.

-“Fever’s settin’ in. She doesn’t have long.” And yet, isn’t it interesting how the time between zombie bite and full conversion is always directly proportional to how relevant it is ti the plot? No, I guess that’s really not interesting. Just obvious.

-Those plans were basic pencil sketches less clear than a child’s drawings. I’m guessing Michonne is humoring Deanna now, though I’m not sure. BTW, how are Danai Gurira and Norman Reedus not big action movie leads by now? Norman needs something to get him out of another Boondock Saints.

-“Your dad’s a killer.” “So’s yours.” The schoolyard taunt, an essential facet of humanity surviving everywhere.

-Today I learned “Your dad” and “you’re dead” sound very similar when uttered in the same fake accent.

-You dumbfuck, don’t pull a gun on Coral.

-Dammit, the week after I give up on the Coral-count, Rick yells it like three times in a row. Three shots, y’all.

-Carl the amazingly noble, non-vindictive teen, letting Rawn off easy here. “Yeah, I get it. My dad killed your dad, but you need to know one thing…your dad was an asshole.” #nonpersuasivearguments #cuttocommercial

-And now a special look at the Point Break remake, just to remind me I do not want to see it, ever.

-And now-now, the stupid Walking Dead-on-a-plane minisodes finally get around to a zombie opening its eyes. Does anyone care about this thing? Really?

-OH SHIT zombie Deanna is on the move! OH SHIT “Tiptoe Through the Tulips” started again!

-Oops! Deanna is not a zombie yet. The plot has other plans for now.

-“I wrote something” is usually a sign an awful conversation is about to begin.

-Heading into commercial, looks like we’re about ready to get the TWD version of Raphael versus Donatello. And that Carol suffers from Dubya Derangement Syndrome.

-You can tell it irks Chris Hardwick to have to describe the his-schedule-bumping show Into the Badlands as “action-packed,” per contractual adspeak.

-Hmmm. I could log on to vote who should win the Carol-Morgan fight, or I could just FUCKING WATCH IT AND SEE WHAT HAPPENS. Radical idea.

-Finally, we remember the one thing that actually worked to walk among the dead. But why bedsheets? If you want to mask your true smell, why not smear the guts over your actual pores and skin? Aside from the vomitous factor, I mean. And how many damn times is “Tiptoe Through the Tulips” gonna repeat?

-Hmm, Deanna, I never realized people had the LUXURY of deciding precisely how far along in the zombiefying process they need to be before shooting themselves. Now, if it were me, I’d want to revive as a walker just to see what it’s like. Seems weird to me more characters aren’t down with that.

-I must confess, I still believe – still believe! – for Alexandria I lose my mind, give me a siiiign…it bit me baby, one more time!

-Stereotypes fail in this fight. Will the black man win, or the older woman? When Hollywood hates both, who can predict? Oh, nope…bad guy interrupts with a gun. The white man, however diseased, takes the power once again!

-I wonder yet again how the hell Eugene maintains his perfectly sculpted mullet, day-to-day.

-See, here is the problem with the zombie guts disguise: uncovered human heads, unmasked by innards, will carry one hell of a scent. Take it from the many sweaty hats I own, and the way my cats actually fight over the right to sleep on them.

-Why do I think Maggie is going to die before Glenn can reunite with her?

-How do Deanna’s legs suddenly work now? Regardless, I love her “Let’s see if I can turn into a zombie-fighting zombie as I die” attitude.

-Wait, THIS is the cliffhanger through Valentine’s Day? Sorry, but with Carl’s hat and Michonne’s sweaty bandana, they REALLY needed entrails on their heads.

-Stay tuned for a prologue during the first commercial break of Into the Badlands? FUCK YOU. Seriously. On behalf of all those of us who use DVRs, FUCK YOU TWICE.

LATER: I hope you’re happy, AMC. I just watched 20 minutes of Chris Hardwick to catch your clip where Daryl and co. meet bikers who mention the name of Negan. Something that would have made fans lose their shit if you’d shown it right after THE ACTUAL SHOW.

I am impressed, however, that Chris Hardwick’s teeth are not all Hollywood-uniform and super-white. This is the most human thing about him I’ve observed so far. I notice this stuff when trying not to listen to his voice.

I am also impressed that this was a really kickass episode. Lots of zombies, fights, drama, and CORAL! All I ever ask.

And now begins two months of me having to find actual news Sunday night. Damn.