Hello all. It is another sad week this week in San Bernardino Co, CA with the shooting at Regional Center. Frankly, I don’t see how this has helped the Muslim cause in anyway. They need much better PR people. If you want to win over hearts and minds, how about setting up soup kitchens and help the homeless; a mass murder at a company party, really? I know several Muslim families and they now feel they just may be targets for others.

All county facilities were on lockdown until the following Monday. Even the lobby door at the Sheriffs was locked so it was really weird to go to the station.

The TR lair in JT is getting fortified. Have added security doors and bars for the windows are in process. Crime is going up in the county and as I am fairly isolated I wanted to protect the house and myself. I remember when we first moved to the area we never locked the front door and in 30 years now we have security bars. Such a sad comment on the state of the world today. I have attached a pic of the new security.

So much for my comments on the world for this last week; let’s get on with your questions. I really got some good ones this week.

QUESTION!!! What’s up with sunflowers in Japanese culture? This may be outside your wheelhouse, but maybe you know someone who might know. Sunflowers seem to be a reoccurring theme in Japanese animation in particular. For example in Ghost in the Shell Stand Alone Complex the existence of a sunflower based treatment for a disease is the basis for a conspiracy reaching into the highest levels of their corporate and government world. In Samurai Champloo the search for a “samurai who smells of sunflowers” is the MacGuffin that drives the adventure. Sunflowers aren’t even native to Japan – so what’s the deal?

They are associated with summer festivals of Japan. There are several summer festivals thru Japan to celebrate the Sunflower which originated in North America. Did you know that Sunflowers have been used to help remove radiation both after Chermobyl and Fukushima? They remove the heavy metals from the soil and help with decontamination. I can see why they use the Sunflower in animation as it is such a happy flower, bright and cheerful and really sets off the beauty of the animation.

QUESTION!!! What’s up with canister vacuums? Why do people like them? The canister always seems to get caught on something or flip over so that you end up having to carry the thing around which is much more cumbersome than a simple upright.

Completely agree – I don’t like the canisters and don’t own one. I have a Dyson upright, bagless. It has a detachable wand so I can get up in high corners and under things. It is great for picking up all of the kitty fur in the house. Lots of suction and does not clog and with 5 little ones that is very important. It is also lightweight and I like that I can see when the dirt cup is full and can change it out without all of the bag hassle.

Who thought it was a good idea to release Concussion on Christmas? Are people suppose to see it as a family?

QUESTION: Who would you want to play you in a movie based on the story of Topless Robot / The Robot’s Voice? Who should play Luke and who should play Julia?
*Restriction: must be an actor/actress currently living and making movies.

Julia is easy: Rebel Wilson or Amy Schumer – very funny ladies and Julia is a Hoot.

Me: Michelle Pfeiffer or Glenn Close

Of course we are all available to play the parts and are all actors. Anyone want to fund the project? LYT could write the script. Julia knows how to edit, I can deal with craft services (food). So now we just need camera and money. Who’s in?

How much should you reasonably spend on Christmas presents per person you’re buying for?

I generally spend based on the situation. For example, at the office generally a $10 to $25 limit is pretty good. Many offices have price limits. I always remember to tip people like the gardener, post person, hairdresser etc for their services thru the year. I consider about ½ of a months service. The post person generally gets $10 as I don’t pay them. Others as I have a figure get a bit more. Casual friends generally in the $10-15 range – a nice box of candy is always good. The family, well, totally different as I generally shop all year long and just put things away as I find something so that is normally in the hundreds. For example, this year Luke and Julia got a trip to Mexico (all paid) in November and they are getting some other smaller things, but can’t say what just yet. You really have to do with what you budget says is ok. This is not the season to go into debt. Remember even a gift you make yourself is very special as you took the time and thought to make it.

Well, that’s a wrap for this week. In my travels around I found this neat plane. I think it might be a Transformer. Next time I see LYT I will put it in his hands for the final determination and then he can take it home if he wishes. 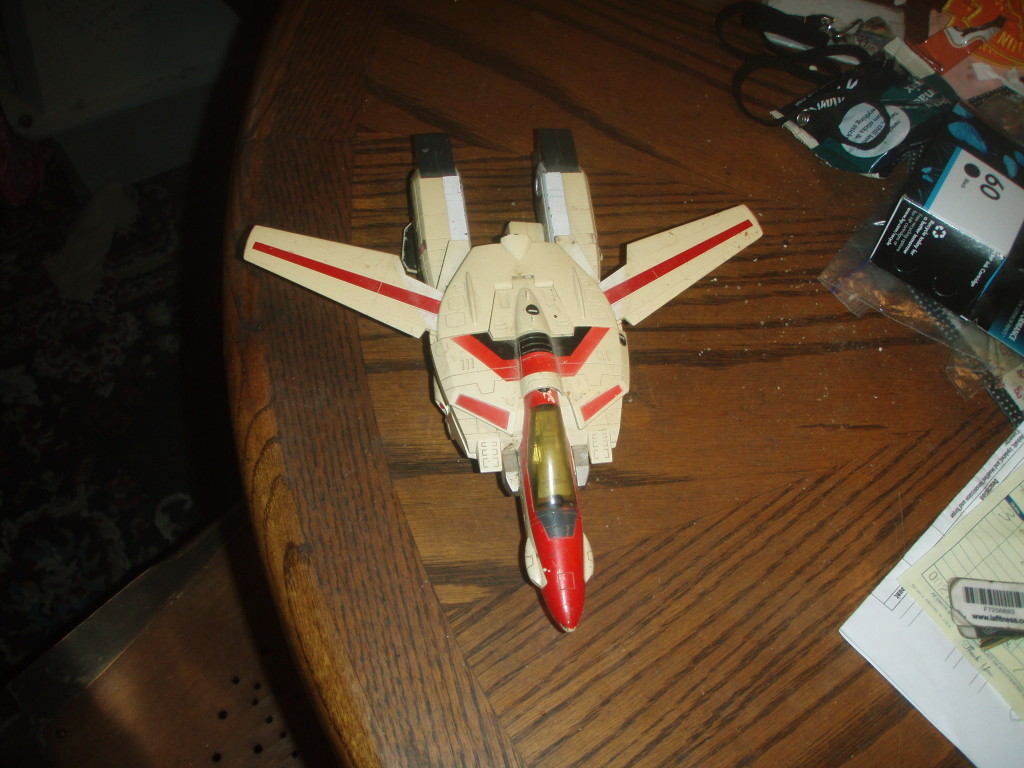 [READERS: I imagine you can guess how the lights in my eyes went off upon seeing Jetfire – LYT]

In closing I am re-uploading a pic of very special boots. 12/10/13 was the last time my husband used them. 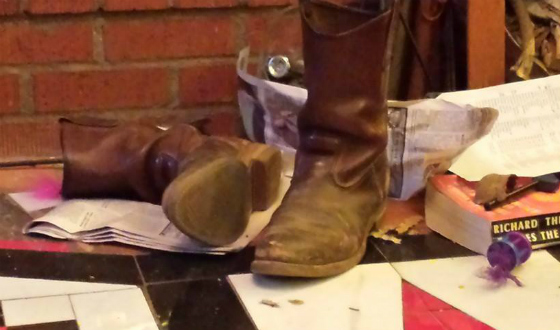 Anyway, all for now. Be good to each other this next week. Only 16 more days until Santa arrives!!!! Yippi!!!!!. I still have one more thing to purchase. That’s not too bad. Huggs to you all.