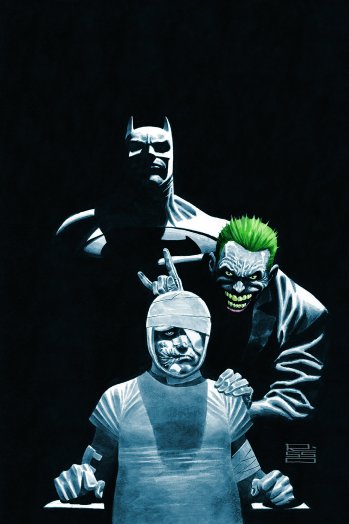 Paul Dini is a genius. The Emmy Award winning writer and producer is responsible for one of the greatest shows ever in Batman: The Animated Series, not to mention countless others. That show redefined Batman for an entire generation of kids, and also helped carry fans through those dark Joel Schumacher years (*shudder*). Not to mention the tremendous work he’s done in comics and video games with Batman: Arkham City and Batman: Arkham Asylum, which proved that Batman video games do not have to suck. Dini has had an amazing life alongside Batman. However, there was one night in 1993 where Batman wasn’t around to help Dini, when he was brutally mugged in Los Angeles. The attack left parts of Dini’s skull “powdered on impact.” Dini is now opting to tell his version of events in a new graphic novel from DC’s Vertigo Imprint, Dark Night: A True Batman Story.

Dini is finally recounting this event through a story due out in June 2016, drawn by Eduardo Risso (100 Bullets), which will feature his longtime muses Batman and The Joker. As a true story, the characters serve as a Greek chorus, figments of Dini’s own imagination, that Dini “spoke” to throughout his rehabilitation.

Paul Dini is one of my favorite writers ever. His influence on the Batman franchise is unquestionably one of the most important parts of Batman’s long history. For Dini to share such a personal and traumatic point in his life is pretty incredible. Based on what Dini’s said, recounting the experience was quite therapeutic and understandably emotional for him. Going by the description of the story, this could very well be a Pulitzer Prize-worthy story. If that last statement sounded like a joke, it’s not. I hold Dini’s work in high regard. At the very least, the story will likely be an Eisner Award winner.