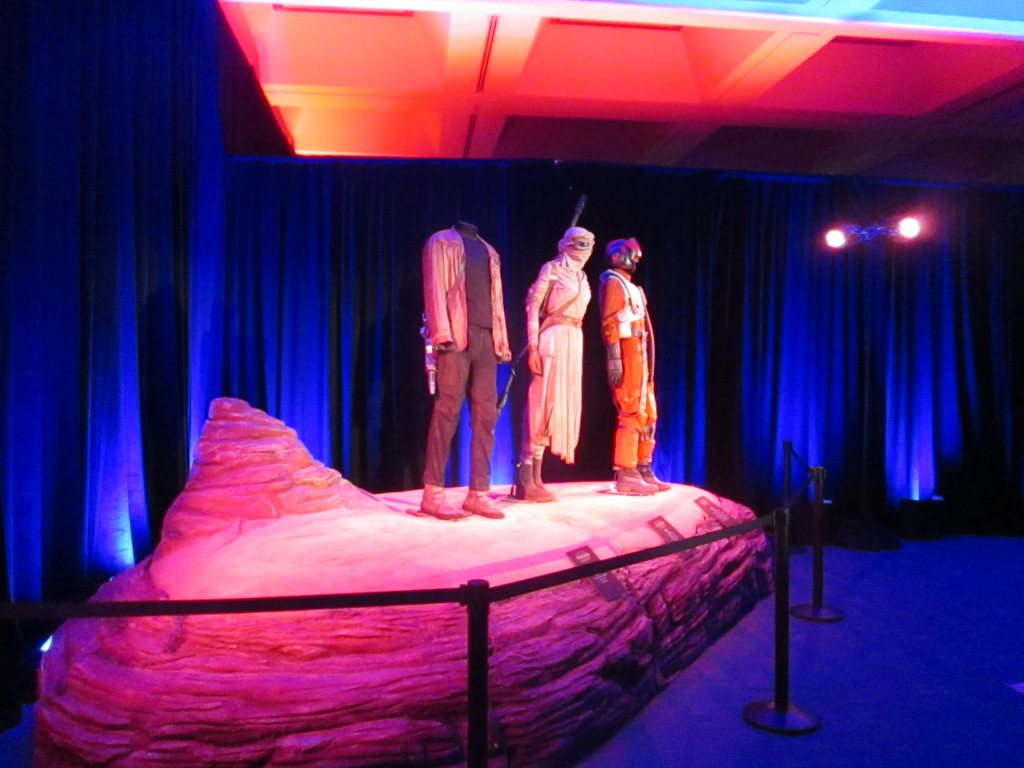 In today’s second installment, Mindy Kaling took the stage once again to talk with Harrison Ford, Kathleen Kennedy, John Boyega, Oscar Isaac and Gwendoline Christie. Again, you may have seen other sites use some of these quotes, but we have the entire thing.

In between the conversation, we have a look at some of the artwork on display, for which various creators were commissioned to offer unique takes on a basic Stormtrooper helmet. 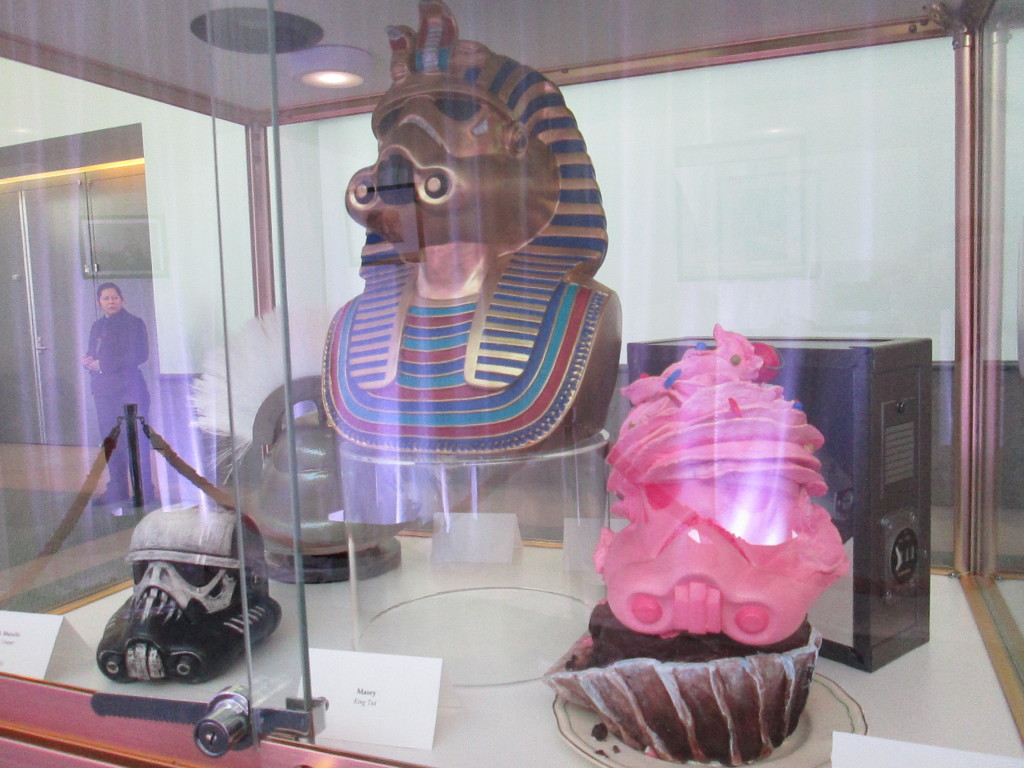 Harrison Ford: That’s a very good question. It’s because it’s what I do. It’s what I like to do. It’s what’s fun for me. And I had a chance to work with people I really admire, doing something that I thought was going to be fun, and which actually turned out to be fun, and to work with J.J., whose work I had really admired and long known about. It seemed like a good idea at the time.

MK: I’m going to be opening this up, by the way. We’re just going to be talking for the first few minutes. John – I loved Attack the Block.

MK: You are poised, in my opinion, to be an international heart throb. You will be a fixture at Victoria’s Secret runway shows. My question is: Do you have an attorney? And are you excited about this?

JB: I have an attorney, yes. I’m looking to be rich like Harrison.

JB: I’m trying to have planes and all that stuff.

MK: We’re going to open this up – I’ll have questions for the rest of you as well.

Q: Mr. Ford, could you talk about what it means to you to be one of the bridges between the original series and this new generation?

HF: It’s gratifying to be asked to be part of this. There was an interesting story to tell through the character. It’s always nice to anticipate working in something that you know people will have an appetite for. This is not a crap shoot! This is a big casino, and it’s fun to play with these toys again. It’s been a great experience. Thank you.

Q: For Ms. Kennedy – how do you make sure that this installment makes way for what Rian and Colin are developing? Did you guys map out the three movies before you?

KK: We haven’t mapped out every single detail yet, but obviously everybody’s talking to one another, working together, and that collaboration is what I think is going to guarantee that everybody’s got a say in how we move forward with this. And so far, it’s going great. I mean, J.J. and Rian have already talked at length because Rian is about to start shooting Episode VIII. These guys are getting ready to head over in January. And then Colin will start working with Rian and spend a lot of time on the set with us. 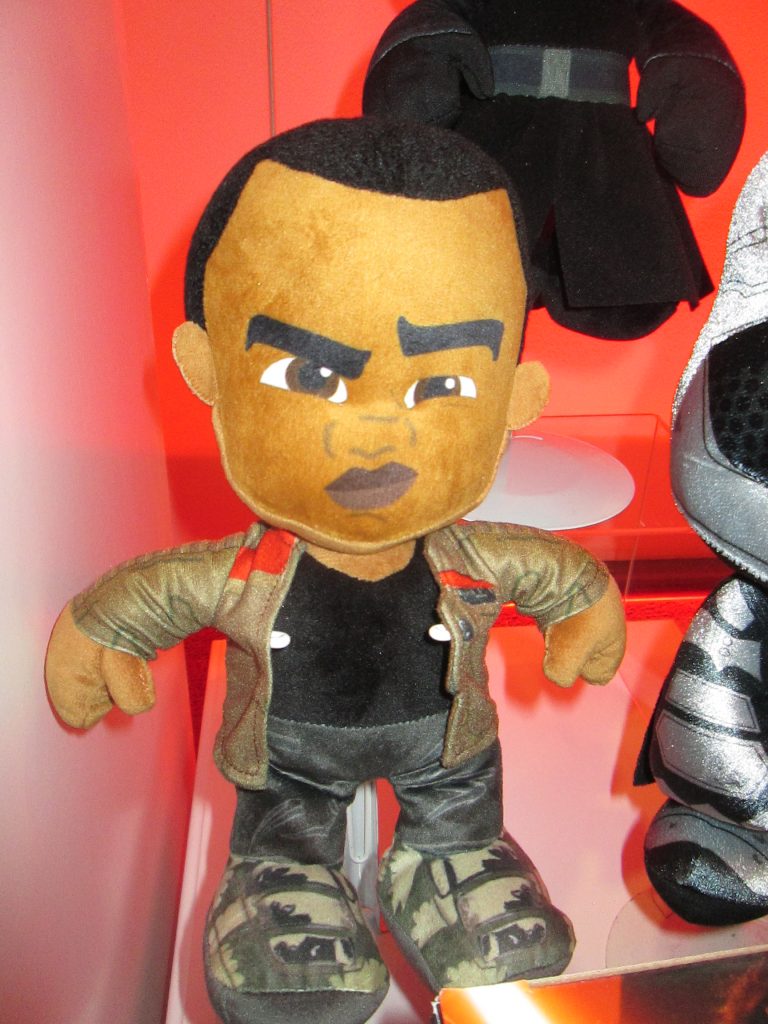 MK: What character would you be if you could be any other character in Star Wars? The reason is for me, I think I’d be suited as a singer in Jabba’s band. Is there anyone else that you think is a cool character to play?

Gwendoline Christie: Someone that I would be suited to, or just someone I’d like to play?

GC: Oh, both! That’s tough. Umm – a character I don’t really think I’d particularly be suited to but would definitely like to play is, of course, Han Solo. [laughter]

GC: I might have just a modicum of swagger, as opposed to the Grand Canyon that’s at the end of the sofa.

MK: That’s quite a compliment. Gravestone, maybe? I don’t know – that’s up to you. 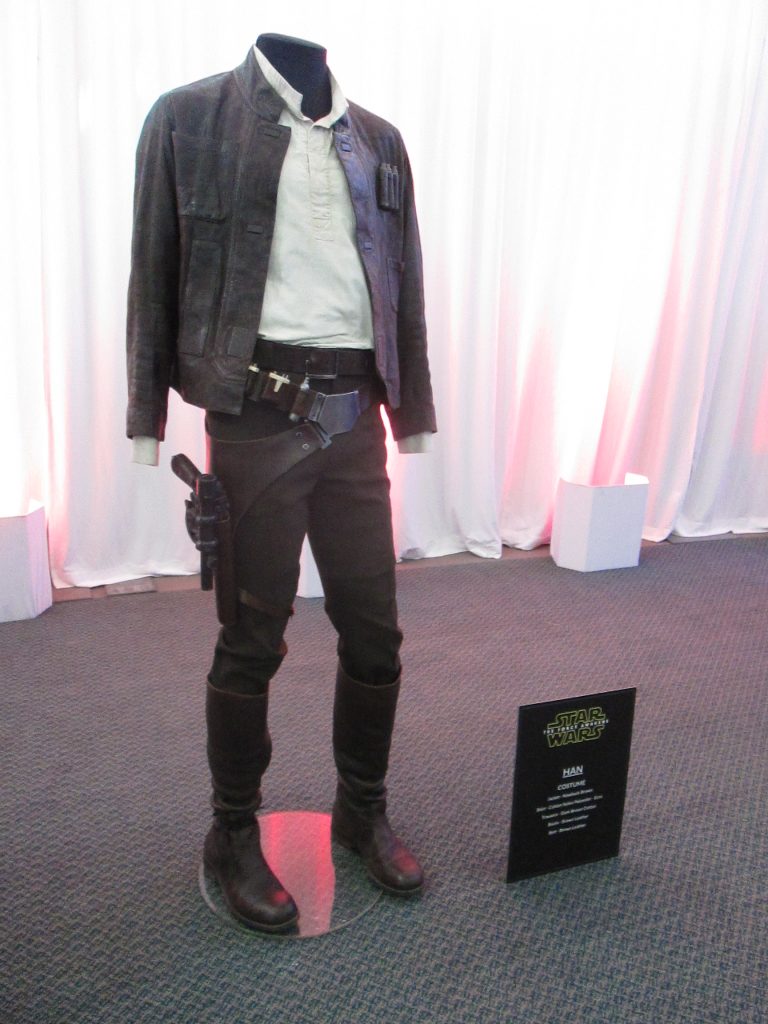 Q: Mr. Ford, what is the bigger difference between this Star Wars and the first Star Wars, and how does it feel being back on the set of Star Wars?

HF: What is the difference? Is that part of the question? You know, I think it’s hard to say what the difference is. I can tell you how it feels. It feels familiar. It feels good. It’s good to be home, as Han says in the trailer – in the teaser trailer. It’s a – I’m aware of the value that’s placed on these films by the audience, and I’m gratified that they’ve been passed on – the first three have been passed on generationally through families, and that there is still an audience for those of us who were in the original film. There’s still some value to them interpreting life somehow. It’s a bit of a mystery, but it’s very gratifying to be part of that.

MK: I have a question. What was the difference in the wrap parties between them?

Q: This question is for Harrison Ford. As a parent, what’s it like telling your kids you’re coming back to this franchise? Did that up the cool factor once again for you with them?

HF: My kids do not think I’m cool at all. [laughter]Being in this movie is not going to convince them otherwise. They’re just glad to see that Dad is still working.

MK: Oscar, in my experience, there is always one actor on a set where everyone goes to their trailer to listen to music and to get high. I know that none of you guys do drugs because you’re professionals, because it’s a Disney movie, but which trailer did you go to?

Oscar Isaac: I went to my trailer.

MK: Did anyone go to yours to hang out?

OI: Yeah. They were mostly going between Carrie and my trailers. [laughter]

MK: John, did you hang out in your trailer, or did you also go to Carrie’s?

OI: My uncle came to visit. He was a Star Wars fan, and he’s so obsessed with Star Wars, and I lost him – I couldn’t find him. And I heard all this laughter coming out of Carrie’s trailer, and he was there, just with Gary Fisher, her dog, just hanging out with them. I was like, “Tio, what are you doing here? Get out of here!” So yeah. That was the cool place to hang out.

Q: The question I have, as you may know, Star Wars is basically a religion now. Several thousand military personnel list their religious affiliation as Jedi, and there are lots and lots of Star Wars weddings. Are you – any of the cast members – are you prepared to ascend to the level of at least sainthood? And Mr. Ford, have you any advice for them? Is there any hope? Is there anything you can tell them that will help them deal with that?

HF: You know, I think my advice is pretty much limited to look both ways before you cross the street – stuff like that.

HF: Yeah. But I’m not going to tell them how to navigate this very personal space of trying to figure out the careers that they’ve chosen for themselves. It’s bizarrely individual how you navigate the space between where they’re at now and the rest of your useful professional life. But they’re in for a big ride, and they know it, I think. I hope they know it.

JB: Sainthood? I don’t know that I’m ready for this whole thing. I just know that I’m in it, and it’s going to come out, regardless, and it should be fun. You’ll let me sleep on your couches? [laughter]

HF: I hardly know you. [laughter] 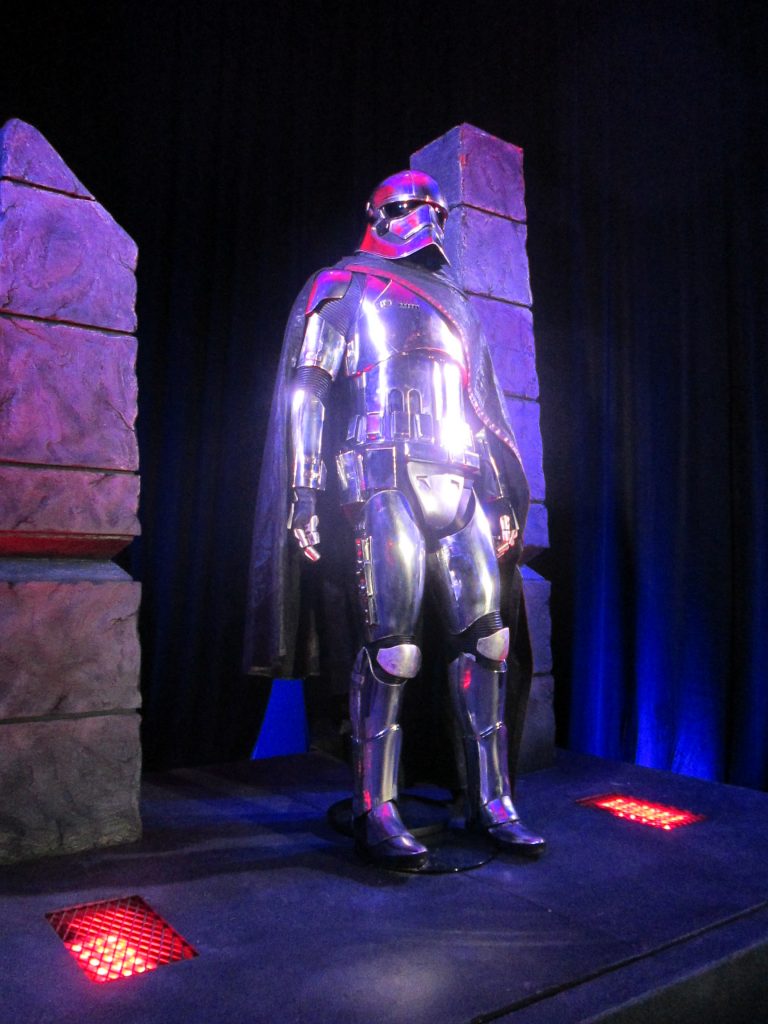 Q: This is for Gwendoline Christie. Were you prepared for how Captain Phasma became kind of an instant sensation among fans? And as a second part to that, do you think that positioned you for a really strong run in the Captain Marvel role, if Marvel happens to offer it? [audience hoots]

GC: I was very surprised and heartened at the overwhelming response to the character of Captain Phasma, but I really felt that what Kathleen and J.J. and everyone who created Star Wars was – I think J.J. was open about the fact that he wanted to respect the origins of the films and celebrate them, but to bring them into the modern day. Confirmation of that seemed to be, to me, in this amazing character of Captain Phasma, who is Star Wars‘ first onscreen female villain.

So this, to me, felt very progressive, and the response from the audience and the fans has been so celebratory that it makes me think this is the kind of thing people want to see. People want to see a more diverse reflection of society. I feel incredibly privileged to play that part. If anyone else wants to offer me any work, then I am very grateful and willing to work! [laughter and applause]

Q: I have a question for Kathleen. Thanks for that tidbit about Jar Jar. But I wanted to ask – why the unprecedented level of secrecy around this film? I’ve never covered a film junket where the media couldn’t see the film in advance, the cast is terrified of letting anything slip – some of them said they haven’t even seen the film. So why did you go to those extremes?

KK: I think right from the beginning, we respected the fans, and the fans have really been the ones focused around making sure that everybody and anybody who walks into this movie gets to be surprised. We have so little things that surprise us anymore. We walk in to see a movie, it’s all told in the trailers. It ends up online way in advance. I think, you know, that’s something that overwhelmingly – I’ve had people say to me “I don’t want to read anything at all,” so that they can get into the theater and actually have a pleasant surprise. So that’s really all that’s driving it. We’ve respected that in all ways we can.

MK: That’s a doozy of a movie to not know anything about!

OI: Yeah, I was in eighth grade. We just saw the poster.

MK: They cut off all her limbs!

OI: We didn’t know that going in. We just saw a female body, we were like, “OK.”

KK: Make sure they know that does not happen here.

OI: No Jar Jar, no female limbs cutting off.